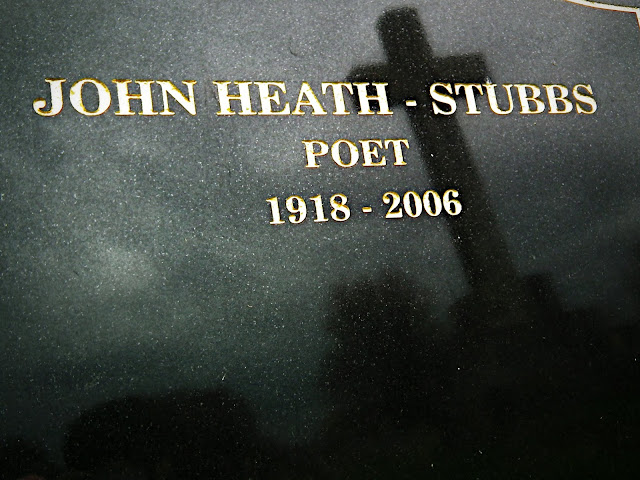 Mr. Heath-Stubbs as you must understand
Came of a gentleman's family out of Staffordshire
Of as good blood as any in England
But he was wall-eyed and his legs too spare.


Amongst the more learned persons of his time
Having had his schooling in the University of Oxford
In Anglo-Saxon Latin ornithology and crime
Yet after four years he was finally not preferred.


In his youth he would compose poems in prose and verse
In a classical romantic manner which was pastoral
To which the best judges of the Age were not averse
And the public also but his profit was not financial.


Now having outlived his friends and most of his reputation
He is content to take his rest under these stones and grass
Not expecting but hoping that the Resurrection
Will not catch him unawares whenever it takes place.


Born on 09 July 1918 in London, the poet John Heath-Stubbs died on Boxing Day 2006, aged 88 at his flat in Bayswater. The Church Times reported that his parish priest (from St Matthews in St. Petersburgh Place) brought him communion the day before his death (on Christmas Day?) and reported “that the poet’s mind was undimmed, and he was still giving out erudition.” Sadly his poem ‘Epitaph’ was not used as the actual epitaph on his slickly polished marble headstone in Kensal Green Cemetery.
He suffered from problems with his eyes from the age of 3 and after a lifetime of gradually deteriorating eyesight became completely blind just before he reached his 60th birthday. As a teenager his vision was poor enough for him to be sent to Worcester College for the Blind. Despite his disability he was a brilliant scholar, a polymath and an expert of The Golden Bough; he graduated at Queens College Oxford.  His obituary in the Independent says he was “then a tall, gangly youth with extreme short sight, peering into books. Friends found the sight of him in summer, holding on to the riverbank while his punt moved slowly but surely downstream, transforming him from an arch into a splash, unforgettably funny. Little by little he became completely blind, so that if he was reciting his poems to an audience he might by misjudgement turn and address them to the wall.”
Heath-Stubbs was that very rare thing, a professional poet. Most of his income may have come from his academic posts but these were almost all granted to him because of his status as a poet. In the Guardian Jonathan Fryer wrote:


Though curious to discover new ideas, he was not a good listener and could be unbridled when his hackles were raised. He sometimes lost his temper even with close friends, though he would usually ring them the following morning to apologise.
John could be found in many of Soho's notorious drinking-holes in the 1950s and 1960s, and his own little basement flat in west London was a model of bohemian squalor. Fiercely independent, he lived on his own and insisted on cooking for his guests - surprisingly well, though both the floor and the ceiling showed evidence of mishaps.


Some of his poetry is astoundingly beautiful, as in these lines about the swift;
There is no creature (except, perhaps,
The angel) so wholly native to
The upper air. His tiny feet
Cannot walk on ground, can cling only.
The wisps and straws he needs to build his nest
He snatches in mid-air. He even sleeps
Borne up by the rising thermals.
This black screamer, rushing at evening
Above our cities, is kin
To the tropical humming-bird, who can fly backwards
Out of the great flower-bells
In the Amazonian forest.
Posted by David Bingham at 14:39