In the observation ward of Claybury Hospital
I read the Coming of the Bill.
Ivan Blatný - Nastoupit v rad

The 35 year old Ivan Blatný was admitted as a long term patient in 1954to Claybury Asylum in Woodford Bridge. The prematurely middle-aged Czech with the strong mittel-European accent was in poor physical as well as mental health.  He was thin, frail and undernourished, had a serious chest infection and was limping from an untreated ingrown toenail. The psychiatrist who admitted him noted that the poet had been brought into the hospital by friends on whose floor he had been sleeping for the past few months. He had been making a precarious living for two or three years working for the BBC World Service and Radio Free Europe and publishing a few verses in an anthology of poets in exile. His homesickness and natural timidity kept him isolated and he only mixed in the émigré community. As a result of this and despite a natural facility for languages (he knew Esperanto, German, Italian and Spanish as well as Czech) after six years in England his spoken English still wasn’t fluent. It wasn’t his first stay in a mental hospital – the doctor would have seen from his records that he had been originally admitted to Friern-Barnet in 1948 and transferred later that same year to Claybury. When the door of the ward closed behind him it was to be for the last time, Ivan Blatný was never to live outside an institution again. He spent the next 36 years living at Claybury and other hospitals in Essex and East Anglia.


Ivan was born in Brno in 1919 and came from an artistic background. He was precociously intellectual and by the age of 9 he was entering into literary contests and was learning Esperanto and German and travelling across Europe with his parents. In 1930, when he was eleven, his father became ill with a pulmonary infection that was eventually diagnosed as tuberculosis and died shortly afterwards. The family were left in straitened circumstances but coped until three years later when Ivan’s mother contacted hepatitis and also died. The devastated Ivan moved in with his maternal grandparents and poured out his feelings in verse. He later attended the Faculty of Arts at Masaryk University reading Czech and German, for a few months in 1939 before the Nazi Reich Protectorate closed down all places of higher learning.  With nothing better to do Ivan took over his grandfather’s opticians business in the centre of Brno. For the next 6 years he devoted himself to myopia, astigmatism and poetry. He contributed regularly to magazines and published works written in collaboration with the Bohemian Jewish poet Jirí Orten as well as three collections of his own poems. Jirí Orten was Ivan’s best friend but on his 22 birthday, the 30th August 1941, he left his apartment in Prague to buy cigarettes and was knocked down by a German ambulance.  He was refused admission to the first hospital he was taken too because he was Jewish and died two days later. The stress of living under Nazism led to Ivan’s first breakdown for which he was hospitalised briefly. In 1946 Ivan joined the Communist Party of Czechoslovakia.


In March 1948 the poet had a stroke of luck when he was offered a place on a three man cultural delegation from the Czech Writer’s Syndicate to London. He defected the moment he arrived in the UK, resigning his membership in the Communist Party and his place in the Writer’s Syndicate and sending his membership papers back to the respective organisations in the post. On the day after his arrival he turned a talk he was scheduled to give on the Czech service of BBC radio into a denunciation of the Communist authorities.  The Czech authorities were furious and reacted by declaring him a traitor, banning his work and confiscating his property in Brno.


Within a few months of his defection the stress of living as a refugee and the virulence of the Czech authorities reaction led to another breakdown.   For the next six years he was in and out of hospital; during periods of remission he worked sporadically as an External co-worker for the BBC World Service and Radio Free Europe, learnt Spanish and Italian and continued to write poetry. But by 1954 when he was admitted to Claybury for the last time his illness conspired to rob him of his poetic gift. He fell into a 15 year silence that was to last until the late sixties. The young writer seemed to be totally forgotten, his work banned in his homeland where many believed him to be dead anyway, doubly locked away from the world, inside a profoundly disruptive mental illness and inside the asylum, terrified of KGB spies amongst his friends and acquaintances in the émigré community. His isolation seemed complete. But at least one group of people still remembered him and still took a keen interest in is welfare. When the archives of the Czech state security services were opened following the velvet revolution there was a substantial file on Blatný (codename NEWT) which included a top secret plan to bring him back to Czechoslovakia. A Major Kolarik was to visit Blatný at Claybury and try to entice him home. The visit was not a success; Major Kolarick informed the Security Services that the poet was "in fact insane".


Following this visit even the Czech State Security Services lost interest in him. For the next eleven years Blatný lived quietly at Claybury with no contact with the outside world. In February 1969 he received his first visitor from Czechoslovakia since Major Kolarik. His cousin, Dr. Jan Šmarda had succeeded in tracing him and visited him in secret. In June he received another visitor from his hometown, a high school teacher, Vladimír Bařina. Bařina was an admirer of Blatný’s work who brought news from Brno, greetings from some of his old friends and poems from Klement Bochořák. The visit and the interest shown in his poetry seems to have stimulated him to start writing again. 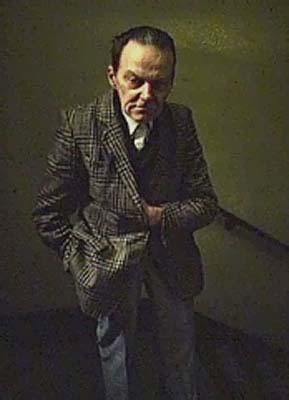 Over the next eight years he wrote continuously, both in Czech and English and guarded his manuscript’s jealously in a cardboard box. The hospital staff still regarded his work as the scribblings of a lunatic and threw them away if they were given the opportunity. This work would no doubt have all been lost in time if Blatný had not been transferred in January 1977 to St Clement’s Hospital in Ipswich. A nurse working at the hospital, Frances Meacham, visited Brno later that year to stay with a friend who had served with her in the RAF medical corps during the Second World War.  During her visit she met, by complete coincidence, Vladimír Bařina who also introduced her to Jan Šmarda. The pair begged her to take care of Blatný and to keep them informed of how the poet was. With this began an extraordinary collaboration between the nurse and the patient that lasted until Blatný’s death in 1990.


Frances Meacham encouraged Blatný to put together a collection of his writings and she sent these to the famous Czech novelist Josef Skvorecky in Toronto. In 1979 these were published as Stara Bydliste (Former Homes) by the Skvorecky’s famous émigré publishing house 68. This was his first book for 32 years.  Its success encouraged Ivan to put together another book almost immediately which was published as samizdat in Czechslovakia in 1982 and then again by the Skvorecky’s in 1987. Pomocná s˘kola Bixley, Bixley Special School, was Blatný’s most unusual work, written almost as much in English as in Czech with the odd dash of German, French and Esperanto.


Blatný published no more after Pomocná s˘kola Bixley. In 1990 Vaclav Havel paid his first official visit to the UK. Frances Meacham presented him with a letter from Blatný offering him his congratulations and informing him that he will remain in Britain. Five months later he became seriously ill with emphysema and on the 5th August he died in Colchester General Hospital.  Later that day the Czechoslovak ambassador announced that Blatný was considered to be a Czechoslovak citizen at the time of his death. Following the cremation of his body his ashes were flown back to Brno and, in an official ceremony, they were placed alongside his father’s in the Central Cemetery. Father and son rested side by side for the first time in 60 years.


On the 28th October 1997 Vaclav Havel announced that the Za zasluhy medal for merit would be awarded to Ivan Blatný in memoriam, “for outstanding artistic work.”
Posted by David Bingham at 13:08