To the crow, the spoils; to the maggot the fat pickings

I was walking the dog in Valentines Park in Ilford on Saturday morning. It was a beautiful day, the sun was shining, downy clouds raced across a bright blue sky and the park was full of people.  I saw a starling fledging launch itself from the plane trees, on what was quite possibly its first flight, and plunge clumsily into the tennis court, crash landing on the tarmac, apparently without hurting itself. It was about to take off again when a circling crow suddenly swooped out of nowhere and grabbed it in its beak. Before the crow could make a clean getaway with his prey he found himself being dive bombed by two frantic starling parents. Momentarily distracted the crow let go of the young bird and it struggled free, taking another heavy bump onto the tarmac. Screeching with terror the fledgling’s powers of flight suddenly improved and it took off like an arrow, unfortunately straight into the wire mesh netting of the tennis court. It crawled under the netting, just as the crow returned and was about to grab him for a second time. If he thought he had escaped he was wrong, he took off for the trees but was intercepted in mid air by the crow, who sailed gracefully onto a patch of grass before calmly trying to beat the fledgling’s brains out on the ground. The starling parents continued to frantically swoop and dive over the crow as he battered their child to death but he paid them no attention now. When I chased him off he cawed in angry frustration after perching in a nearby tree and watched me attentively with greedy eyes. I picked the fledgling up, it was warm and almost weightless in my hand but still alive. Its beak was wide open and it was breathing heavily but it couldn’t move, its neck had been broken. I put it back down on the ground and as soon as I walked away the crow came back to finish the job he had started.  It took him less than a minute to butcher and devour the fledgling, consuming every scrap of flesh and bone but leaving the feathers neatly scattered in a circle. Within a hundred yards, men played football, children gleefully played on the swings and people strolled the paths, all oblivious to the drama of life and death that had just taken place. 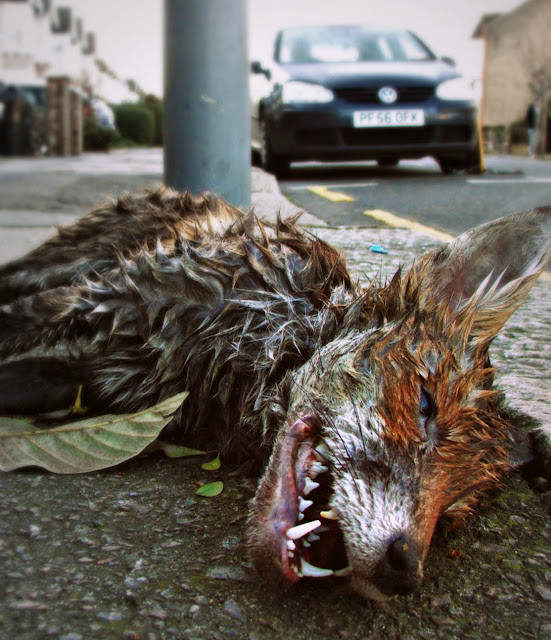 I took this picture of a dead dog fox laying by the side of the road a few streets away from us. Apart from its fur being matted after a night out in the rain it looked in good condition and there were no visible signs of injury. It must have been side swiped by a car and then crawled to the side of the road to die. The Council street cleansing depot is a hundred yards away but the bin men drove past this for three or four days before someone finally bowed to the inevitable and removed the corpse. Urban foxes thrive in this area, mainly by raiding my dustbin as far as I can see. I like to see them but a lot of people regard them as pests because they rip open plastic bin bags looking for meals, crap on people’s driveways and dig out pointless burrows in gardens. They also make quite a racket, particularly during the mating season when randy vixens screech, squall and cry until a dog fox gives in and inseminates them. Sometimes hidden in the undergrowth in the park the dog comes across dead foxes in various stages of decomposition.  No one removes them and they decay quickly, insect scavengers and bacteria competing to gorge on the rotting flesh. Even the bones disappear within two or three weeks leaving just the inedible fur. 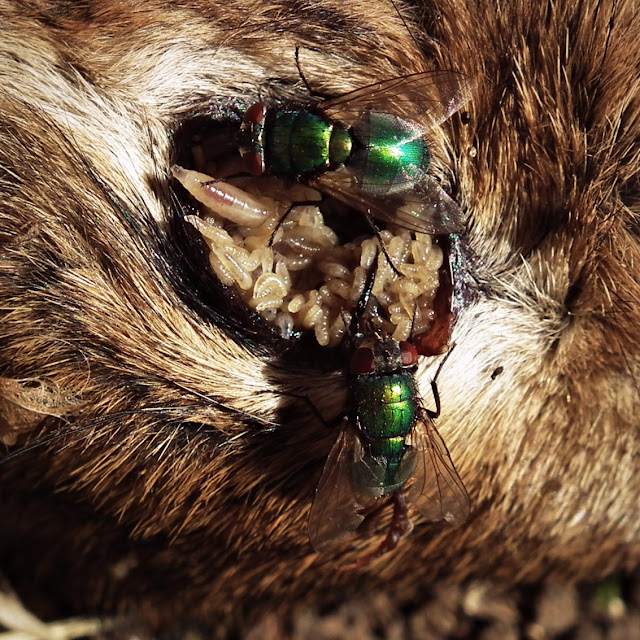 This is a dead rabbit in the churchyard at East Horndon.  From a distance the rabbit looked like it had only recently died. Closer up it was mass of maggots. I had often wondered why dead rabbits and hares are frequently found with no eyes, as though someone had neatly removed them. Seeing this I realised that the answer is that flies lay eggs on the still moist eyes and the hatching maggots eat them. If an animal has died of natural causes and there is no other way into the corpse the eyes probably become the easiest route. Mouth and anus are small and probably clutched shut by rigor mortis and the skin is tough and dry and not an obvious place for a fly to lay its eggs.  The sockets were a seething mass of wriggling maggots and no doubt they were starting to chomp their way into the rest of the body cavity. 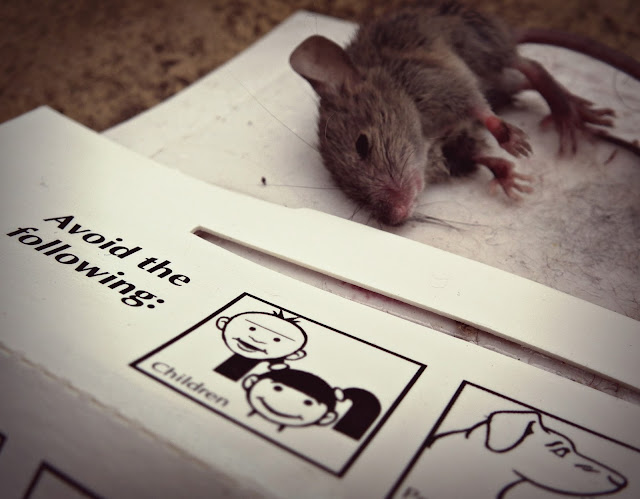 I don’t find mice repugnant the way many people do but, sadly, I realise that you can’t allow them to have the freedom of your house. If they move in you have to move them out. Being stubborn animals who are reluctant to leave that generally means having to kill them. I don’t like poisons because they crawl away and die in agony in nooks and crannies where you can’t get at the corpses and who wants a house that stinks of dead mice? I find glue traps are very effective at catching them but, unless you are cruel and throw them in the bin still alive, you have to kill them. This photo was taken while the mouse was still alive. Once I had my shot I bashed his head in with a half house brick I keep for mouse killing. Someone I used to work with told me that her dad owned a dry cleaners in Canning Town when she was a kid. He used glue traps for mice and was also reluctant to throw them in the bin alive. So he would careful fold them the traps and then call his kids in and make them dance a jig on them. 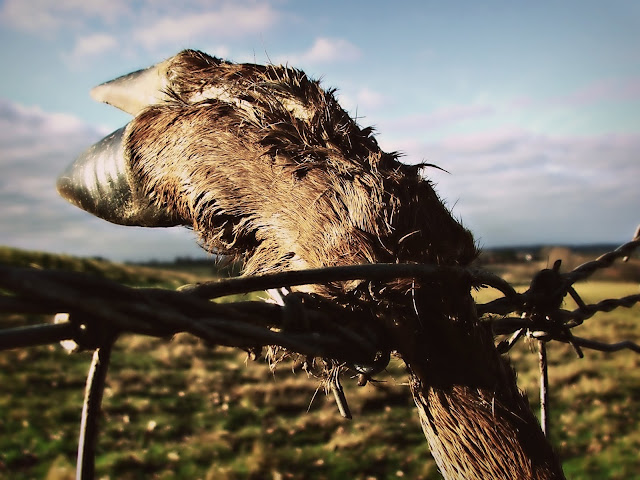 I was on the outskirts of Epping Forest in the grounds of Copped Hall when I came across this. A deer had been trying to leap a barbed wire fence and managed to get one of its hind legs entangled. Efforts to disentangle itself seem to have resulted in it twisting the wires together into a lethal knot. The deer either fatally injured itself in its attempts get free, died of exposure in the cold before Christmas or starved to death when it had eaten all the grass within range. The carcass was fairly whole but there seemed to be little inside the body cavity, something seems to have eaten it. Foxes? I find dead animals much easier to take photos of than live ones, immobility being a big help in setting up a shot.
Posted by David Bingham at 05:35