The final resting place of the great and the good; Hampstead Cemetery, Fortune Green Road, NW6 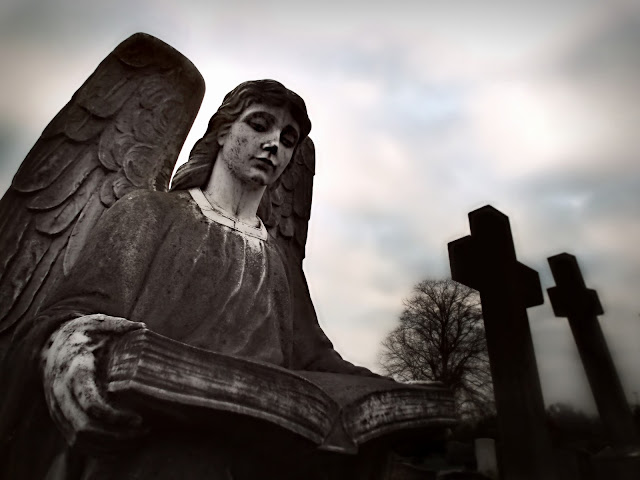 "Ever hear about the aviation pioneer kidnapped (and then worshipped) by cannibals?" Me neither but on the 24 June I will find out because I have booked myself onto the Cemetery Club’s tour of Hampstead Cemetery. I don’t normally go in for guided tours, particularly of cemeteries, as one of the things I most value about them is the chance to get away from the rest of humanity (the living ones at least) and experience a bit of solitude. I am going to make an exception though because I recently saw Cemetery Club founder Sheldon Goodman speak at an event at the University of Greenwich and he was very good.  To get myself in the mood I had a look through the photos I took on my one and only visit to Hampstead on a dull and miserable mid December day back in 2013 to see if I had managed to take anything worth posting.

Hampstead is a 26 acre, late Victorian cemetery, consecrated by the Bishop of London in November 1876, and now run by Islington and Camden Cemetery Services. The Hampstead Burial Board acquired the original 20 acres occupied by the cemetery in 1874 for £7000 when it became clear that the churchyard of St James was almost full and would soon run out of space. The site was surveyed by Sir Joseph Bazalgette and then laid out and planted for £2500 and a further £4843 spent on the building of the lodge, chapels, railings and gate piers. 30 gardeners were originally employed to keep the cemetery looking its best. Despite a further 5 acres of land being acquired in 1901, 60,000 people are interred here and the cemetery is full and no longer open for new burials. The catchment area for the cemetery has always been reasonably affluent and as a consequence there are some very interesting memorials and a relatively high number of notable burials. The Bianchi memorial is the jewel in the crown but the Barritt organ is also justly famous and the Fletcher memorial at the back of the chapels is quite spectacular. Notable burials include Kate Greenaway the illustrator, Henry Irving the actor, Joseph Lister the pioneer of antiseptic surgery and Marie Lloyd the music hall star.

Looking through the newspaper archives to see if there were any interesting stories about the cemetery and  there were the usual crop of suicides, sudden deaths and grave robbings but also, in the Ballymena Observer of Friday 09 May 1913, an ‘exciting incident’ (according to the paper) at the cemetery gates when a bulldog attacked one of the horses drawing a hearse. As the funeral procession was about to turn into the cemetery the dog leapt at the horse “and seizing it by the leg brought it heavily to the ground. In its struggles to free itself the horse pulled down its fellow, and for some time the confusion was such that all efforts to get the bulldog were unavailing. A young woman to whom the latter belonged eventually managed to grip its collar, but it was only after the animal had been stunned with a heavy piece of wood that his jaws could be prized apart and the horse released.” The horse was badly injured and no doubt the bulldog nursed a headache for a day or two after being walloped with a log.

Cemeteries are a favoured spot for suicides and Hampstead is no exception.  The cemetery was less than a decade old when it had its first suicide. The Globe of 19 February 1884 reported on the inquest held at the Reading Room of the Hampstead Workhouse into the death of Alfred Pierpoint Chambers, 89 years old of Clapham Road. His body had been found on the previous Thursday morning by one of the grave diggers on the grave of his wife; the jury heard evidence that he had been seriously affected by her death. The post mortem revealed that Alfred’s quick, but undoubtedly painful, death was the result of taking Potassium Cyanide. The jury’s verdict was suicide whilst of unsound mind. Alfred was buried with his wife.  The following year another inquest was held at the workhouse on another cemetery suicide. The deceased was a 39 year old, Henry Butterworth, a chemist on Tottenham Court Road. Henry had left for work on the Thursday morning but then his wife received a telegram from him saying that he had gone to Hampstead “to see our Fred”, this being the name of their only child who had died three or four years before. Worried about his state of mind – he had been low in recent months and was drinking rather more than was good for him – Mrs Butterworth contacted the Police. Later that afternoon a policeman called at the house to break the melancholy news that her husband had been found dead on the grave of their child. The post mortem revealed that Henry had taken a fatal dose of Prussic Acid, another form of cyanide. Verdict – committed suicide whilst of unsound mind.

And then in December 1892 yet another inquest looked into the death of Edward Cornelius Scanes, a tinplate worker of 77 North Street, Marylebone. His son told the jury that “owing to his wife's health and mind not being very good his father had been upset of late, and it had been noticed that he was low and desponding. He had on several occasions disappeared for some days. On Monday he went away, and on Wednesday witness heard his father had been found dead on a grave at Hampstead Cemetery.” Robert Dickens, a labourer, testified that he had been walking through the cemetery when he saw Edward lying across a grave and “on going to him found that he was dead, and noticed that he had shot himself in the chest, while a revolver was lying near his right side.” The police constable who had been summoned to the scene found three letters near the grave; the coroner read one of them out to the court ''From dad — Good-bye, Will. Good-bye, wife. Dear mother, good-bye. My watch is for my son. Please, wife, not to follow my body to the grave. Good- bye. My poor head is very bad." The jury returned a verdict of temporary insanity.  (Morning Post - Saturday 24 December 1892). 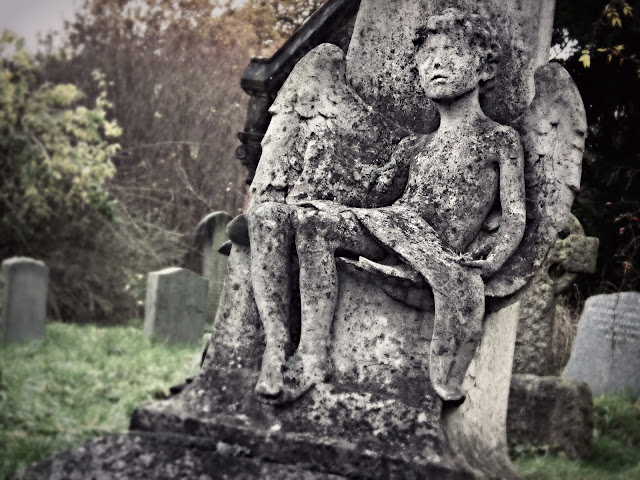 Death in the cemetery was not just the result of suicide. 60 year old Margaret Alice Forbes of Palace Garden Terrace, Kensington collapsed whilst visiting her father’s grave in May 1934 and died before she could be taken to hospital. In 1901 61 year old Robert McLean, a “tall, stalwart man” who was a constable of the Metropolitan Police and had been a member of the Royal Irish Constabulary  was employed by the cemetery on Saturdays  “for the preservation of order and the protection the graves.”  He was found dead by colleagues after suffering an apoplectic seizure.  Another cemetery employee, 54 year old general labourer John Henry Smith, died in 1940 not at work but at his home in Selig Avenue, just off the Edgware Road, along with his wife, both dying of injuries to their throats and chest. Their 22 year old daughter had injuries to her throat and wrists – presumably she had been arguing with her father and he became physical, murdered him and her mother.

Grave robberies? Herbert Walter Watson, 47, was charged with stealing a bronze crucifix from the cemetery in June 1922 and fined 40 shillings. Detective Parfield of the Metropolitan Police told the court that when he had searched Watson’s room it contained a large number of figures of Christ, wreaths and crosses for which the defendant had no other explanation than “he suffered from a nervous complaint and could not account for what he had done, and had no remembrance of entering the cemetery.” William Alexander Cochrane was not so lucky when he appeared at Hampstead Police Court in 1927. Cochrane was the superintendent of the cemetery with 35 years service when he was dismissed for embezzling two sums of money from Hampstead Borough Council, £5 2 shillings on one occasion and 15 shillings on a second. The court sentenced him to 3 months and 6 months for the counts of fraud, both sentences to run consecutively. In recent years the cemetery has been plagued by thieves who steal irreplaceable brass memorials to melt them down for scrap metal. A beautiful bronze figure by Sir William Gascombe John on his wife’s tomb was stolen from Hampstead in 2001 but later recovered. It was removed to East Finchley Cemetery for safe keeping but despite being kept under lock and key in an outbuilding was stolen again in 2006. It remains missing and has most likely been smelted. In 2011 the Bianchi grave was targeted with the cast iron gate going missing first and then the wrought iron railings. The following year cemetery management stepped up security measures including dog patrols and closing time sweeps of the cemetery to check gangs of metal thieves weren't hiding away waiting for it to shut before helping themselves to more memorials. The more recent crash in scrap metal prices has probably done more to preserve the cemetery's security than any of the other measures taken. 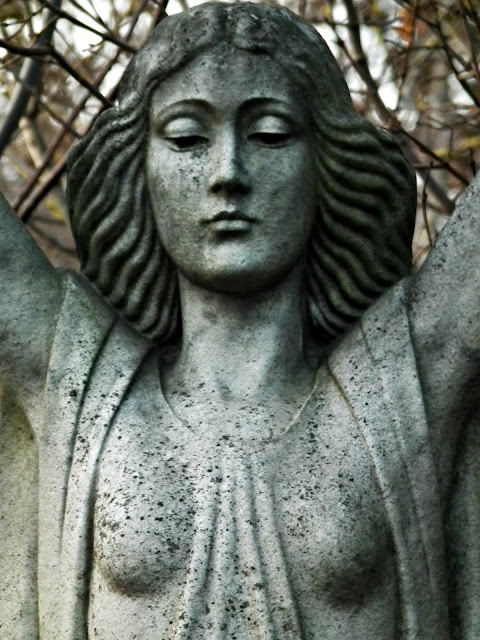