On January 2 this year 90 year old John Berger died at his home in Antony in the southern suburbs of Paris. He was born in 1926 in Stoke Newington during the annual pyrotechnics of November 5th. His father Stanley never fully recovered from the trauma of serving for four years as a Major in an infantry regiment on the Western front during the Great War. He must have hated the noise of Brocks fireworks shattering the quiet autumnal evenings; no matter how muted the explosions must have seemed in comparison to the artillery bombardments it must have reminded him of the war. Stanley was the son of a Hungarian émigré merchant from Trieste; Miriam Branson his mother, was the daughter of a brewery drayman from Bermondsey,  who became a vegetarian, a pacifist and a suffragette.  After the war Stanley tried, and failed, at various business ventures until he set up a very early version of a management consultancy called the Institute of Cost and Works Accountants which turned into an unexpected success and allowed the family to move from Croydon (where they had settled after Stoke Newington) to what passes in East London as a leafy suburb in Highams Park. Miriam ostensibly gave up radical politics when she married but almost certainly influenced  her son’s political development; John was declaring himself an Anarchist by the age of 15 and, once that phase had passed, became a lifelong Marxist.

He left boarding school in Oxford at 16 and returned to London to study at the Chelsea school of Art where one of his tutors was Henry Moore (whose work he later called a ‘meaningless mess’).  In 1944, at the age of 18 he was called up; after refusing a commission in the Oxfordshire and Buckinghamshire Light Infantry, and as a result probably being viewed as unsound, his two years in the army were spent far away from any front line at a Belfast Training Depot in Ballykelly, where despite his reluctance to assume authority he still ended up becoming a lance-corporal. After his stint in the military he enrolled at the Central School of Art and Design in Southampton Row. Despite his determination to make a living as a painter he had to make ends meet by teaching drawing at St Mary’s Teacher Training College in Strawberry Hill, Twickenham. When a friend unexpectedly offered him a spot on a BBC World Service programme talking about art this led to him writing on the same subject for the New Statesman. He published a first novel in 1958 and went on to write over 60 books including 10 novels (one of which, ‘G’ won the Booker Prize in 1972 – Berger famously gave half the £5000 prize money to the Black Panthers after a delivering an acceptance speech in which he denounced the 130 year history of the Booker group in the Caribbean), four plays, five screenplays, two books of poetry and 48 books categorised by Wikipedia as belonging to the genre ‘other’.  The uncategorisable nature of his writing is one of its delights. He is most famous of course, for the television programme and book ‘Ways of Seeing’ in which, under the influence of Walter Benjamin, his opening salvo was “Seeing comes before words. The child looks and recognizes before it can speak. But there is also another sense in which seeing comes before words. It is seeing which establishes our place in the surrounding world; we explain that world with words, but word can never undo the fact that we are surrounded by it. The relation between what we see and what we know is never settled.”

In his later years Berger said he was haunted by the dead.  In an interview in the New Statesmen in 2015 he said “The past is very present to me and has been for a very long time. I first became aware of this quite intensely when I was a teenager, because of the First World War. You see, I think that the dead are with us. What I’m talking about now is a very ancient part of human awareness. It may even be what defines the human – although it [was] largely forgotten in the second half of the 20th century. The dead are not abandoned. They are kept near physically. They are a presence. What you think you’re looking at on that long road to the past is actually beside you where you stand.” Nowhere did Berger make his feelings about the dead clearer than in his wonderful 2005 book “Here Is Where We Meet”, a series of short pieces exploring memory and loss, transporting the past into the present, and mingling the living with the dead. For Berger, a long time exile living in France since the early 1960’s, London, his hometown, is one of those long lost dead, only to be recaptured in memory or imagination. The stories are set all over Europe, Portugal, Spain, Poland, France but each place evokes the past of his childhood and youth in London, in Croydon, Islington, and Highams Park where a river in Easter Europe evokes the river Ching that ran at the bottom of the Berger’s suburban garden.

In the first story ‘Lisboa’, the narrator, called John, is sitting in the  Praça do Príncipe Real where a Lusitanian cypress whose branches “have been trained to grow outwards, horizontally, so that they form a gigantic, impenetrable, very low umbrella with a diameter of twenty metres. One hundred people could easily shelter under it.”  He notices “an old woman with an umbrella ... sitting very still on one of the park benches. She had that kind of stillness that draws attention to itself. Sitting there on the park bench, she was determined to be noticed. ...Abruptly...she got to her feet, turned and, using her umbrella like a walking stick, came towards me. I recognised her walk long before I could see her face. The walk of someone already looking forward to arriving and sitting down. It was mother.”  The ghost (if that is what she is) of Berger’s mother takes to appearing at unexpected moments as her 80 year old son explores the Portuguese capital.  Her voice rejuvenates so that it is the voice of her 17 year self that talks to John. His mother had no connection to Portugal so John wonders why she has chosen Lisbon to appear in; "perhaps Lisboa is a special stopover for the dead," he thinks, "perhaps here the dead show themselves off more than in any other city." His mother has a different theory, it is the trams;

“The trams in the centre of Lisbon are very different from the red double-decker ones that used to run in Croydon; they are as cramped as small fishing boats and they are a lemon yellow. The drivers, as they negotiate the steep, one-way streets, and nose their way round blind jetties, give the impression of hauling in ropes and holding rudders rather than turning wheels and operating levers. Yet despite the sudden descents, the lurches, the choppiness, the passengers, mostly elderly, remain contemplative and calm—as if they were still sitting in their living rooms or visiting a neighbour. And indeed, in places, the trams with their open windows, sway so close to these rooms that it would be easy to reach out and touch a birdcage hanging from a balcony and with a little push set it swinging.”

John takes the number 28 tram to Prazeres the “old cemetery where the mausoleums have front doors with window panes through which you can look at the abodes of the departed. Many are furnished with low tables, a chair, bunks with bedspreads, photographs, statues of the Madonna, cushions. One has a pair of dancing shoes on a rug. Another has a bicycle and a fishing rod leaning against the wall facing the bunk with a small coffin on it.” He spots his mother in the street, flattening herself against a shop front to let the tram past but miraculously boarding it at the next stop; they visit the fish market. John’s memories obtrude, visiting the cinema with his mother to see Marx brothers films or the day she came home with all her teeth removed or the unanswered question of why she never read any of his books. Their last meeting is on the arches of the Aqueduto das Aguas Livres, a vertiginous 60 metres above the Alcântara valley.

‘Lisboa’ is my favourite piece in the book, perhaps because I know the city well, but the other stories are equally as good. In Madrid the narrator finds himself recalling in vivid detail the sad schoolmaster who taught him to write and how to catch a ball, in Krakow he meets Ken, another influential teacher who introduced him to books and sex (no hint here that the young ‘John’ was remotely traumatised by the teacher’s forbidden interest in his body), in Geneva Berger meets his (living) daughter Katya and they pay a visit to the grave of Jorge Luis Borges, in Islington he visits a friend from college who might remember the name of a girl John grew close to during the war, and at a wedding in Poland by the banks of the river Szum he recalls his childhood on the banks of the river Ching in Highams Park. As always the prose is impeccable, studded with arresting images (‘Art, it would seem, is born like a foal who walks straight away’ – on the Cro Magnon rock paintings), nuggets of wisdom (‘desire is brief – a few hours or a lifetime, both are brief. Desire is brief because it occurs in defiance of the permanent. It challenges time in a fight to the death’), or unexpected observations (‘travelling alone between Kalisz and Kielce a hundred and fifty years ago. Between the two names there would always have been a third – the name of your horse.’) Despite his prolific output John Berger’s writing was never less than interesting and at his best he could produce astounding work. This is a wonderful book. 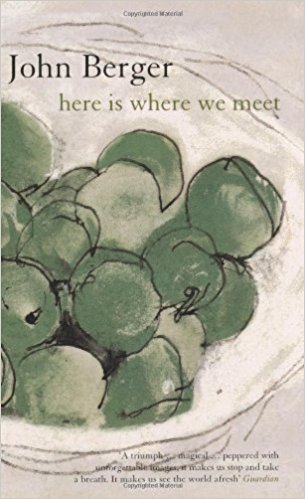