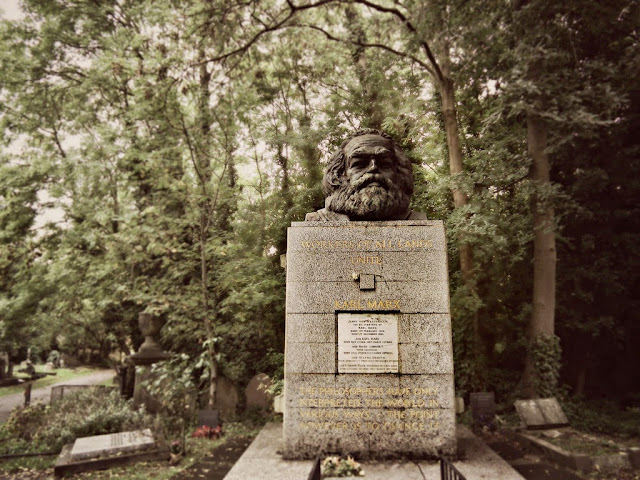 “On the 14th of March, at a quarter to three in the afternoon, the greatest living thinker ceased to think. He had been left alone for scarcely two minutes, and when we came back we found him in his armchair, peacefully gone to sleep, but forever.”
Friedrich Engels


On 17 March 1883, three days after his death, the funeral cortege of the 'best hated and calumniated man of his times' wound its way up from the Marx family home on Maitland Park Road in Kentish Town to Highgate cemetery where the dead philosopher was to be buried with his wife Jenny, who had died two years before. The funeral of one of the most renowned men who has ever lived was famously attended by a mere eleven mourners; his daughters Eleanor and Laura, his two son-in-law’s Charles Longuet and Paul Lafargue, Engels (of course, who also organised and paid for it as well as delivering  the celebrated oration) and a number of socialist colleagues and admirers. The leader of the German Social-Democratic party made a speech in German, Longuet said a few words in French, two telegrams from workers parties in France and Spain were read out and Engels made his speech. And that was it, the sum total of the exequies. The funeral party made its way back to Kentish Town and the gravediggers heaped earth onto the coffin. A few days later a stone mason would have come and added Marx’s name to Jenny Marx’s simple headstone. A week after Marx’s funeral the family was back at the grave to bury his five year old grandson Harry Longuet.


The authorities may well have been heartened by the poor turn out for the funeral; it would have been easy to assume that Marxism was a spent force even before the man himself had died.  On the anniversary of his death however 5000 people (the official estimate) took part in a demonstration organised by the Communistic Working Men’s Club (London). The plan was to march from Tottenham Court Road to Highgate Cemetery where addresses in German, French and English were to be made over Marx’s grave. The directors of the cemetery objected to the rally being held there and the procession, accompanied by a marching band, was forced to convene on a plot of waste ground next to the cemetery where the protestors peacefully listened to the various speeches. The grave gradually became a place of pilgrimage for socialists and communists of every stripe. In 1903 Lenin led a solemn delegation of Bolsheviks, who were attending a pre-revolutionary conference in London, to the grave. No doubt there were more speeches.

The numbers of visitors and the veneration in which they held Marx both increased over the years. The mean appearance of the grave started to shock many. At the 1923 Socialist Annual Conference Charles McLean prefaced a dull report to the hall with an account of a trip he had taken to see the grave at Highgate. “He had some difficulty in finding It” reported the Burnley News “it was only after an hour's search that he was able to stand at the foot of the grave.” He deplored the poverty stricken character of the memorial “an old withered wreath, which appeared to have been lying there for years, and an old flower-pot with a scarlet geranium in bloom, were all that commemorated the memory of that great figure…..some day, he felt, there would be international pilgrimages to Highgate Cemetery—just as there were pilgrimages to Mecca by the Moslems. He hoped he would live see the day when the memory of Karl Marx would have greater meaning.” The Soviets were appalled. If the British wouldn’t look after Marx, they would. By the end of the 1920’s The Soviet Government were applying pressure to HM's Government to allow them permission to exhume Marx and remove him to Moscow where the plan was to lie him in state next to Lenin in Red Square. To bolster their application they had even tracked down 115 descendants of Marx’s in East Germany who had signed a petition supporting the removal of their famous ancestor from the capitalist west. The pressure was resisted and the request refused.
In the greatest secrecy possible one cold night in November 1954 five grave diggers met at the cemetery gates at midnight and after erecting a canvas screen around the burial plot and  firing up their oil lamps they started the grim work of exhuming the four coffins from the Marx plot (as well as Marx, Jenny and their grandson Harry, the faithful family servant Helena Demuth had also been buried there, apparently at the insistence of Jenny Marx herself). The four coffins were gingerly carried to a newly excavated grave on a site next to the main path where a cedar tree had been felled to make way for it. It was two years before the new memorial was unveiled by Harry Pollitt, General Secretary of the Communist Party of Great Britain. A massive sculpted head of the man himself, made by Laurence Bradshaw, stands on a 12 foot high granite plinth with gold lettering.

It was probably the more humble aspect of Marx’s old grave (and the fact that it was hard to find) that saved it from the unwanted attentions of those who violently disagreed with his politics. In total contrast the provoking new memorial was almost an incitement. Right wing vandals have spent the last 60 years clambering over the graveyard walls in the dead of night to daub swastikas and slogans (including “I love Eichmann”) over the slumbering philosopher. In 1970 person or persons unknown tried to blow the monument up. The sophisticated plan involved sawing off Karl’s nose and then emptying bolts, fireworks and a mixture of weedkiller and sugar into the hollow head. The plot was foiled when many hours of sawing revealed that the nose was solid and therefore no easy route into the empty space inside the brain cavity. The bombers had to detonate their device on the ground next to the memorial. They managed to cause £600 worth of damage but the hacksaw had done more to deface the bust than their bomb. Since the end of the cold war things had quietened down but in 2011 another unwanted amateur paint job drew the ire of leading left winger Tony Benn and the chairwoman of the Highgate Society, Catherine Budgett-Meakin.
Posted by David Bingham at 09:39