It is never too late to become a hero (or heroine); Betsi Cadwaladyr (Elizabeth Davies) 1789 - 1860, Abney Park Cemetery 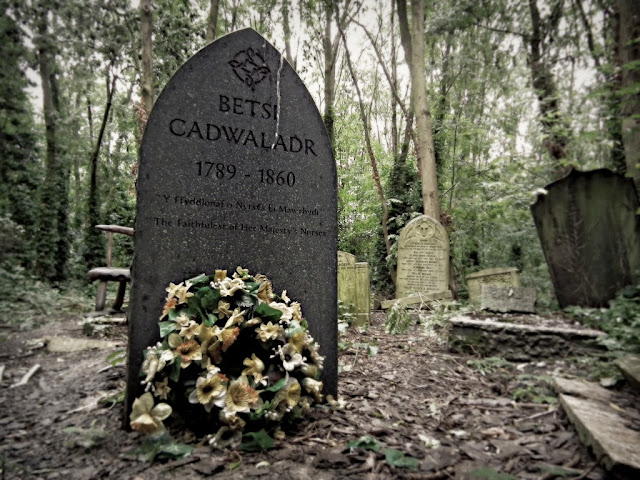 The penniless and obscure Betsi Cadwaladr was buried in 1860 in Abney Park Cemetery, either laid above, below, or sandwiched between, three complete strangers in a pauper’s grave dug deep enough to take four cheap coffins. There were probably not many mourners at her funeral and no marker or memorial was erected over the burial spot.  The headstone now over her grave is new, put up in 2012 by the Royal College of Nursing and a Welsh Health Board that had adopted her name and proclaimed Betsi  a Welsh national heroine. Not everyone was pleased to see the obscure Betsi Cadwaladr, or Elizabeth Davies as she was also known, launched into posthumous celebrity. In Wales there were dark mutterings accusing the former nurse of having worked as a prostitute in the Liverpool Docks; in January 2012 the Welsh Daily Post felt obliged to defend her honour against her detractors and calumniators, retorting that there was no evidence that she had ever sold herself on the streets of Merseyside.


There isn’t much hard evidence about most of Betsi’s life. We know she was born in the tiny village of Bala in Merionethshire, Wales, just one of 16 children of the Methodist preacher Dafydd Cadwaladr. Her poor exhausted mother died when she was 5 and Betsi ended up working as a maid to a local family. At the age of 14, yearning for wider horizons she climbed out of a bedroom window and walked to Chester. Everything we know about Betsi from this point in her life until she went to the Crimea to work as a nurse for Florence Nightingale, we know from a highly coloured and highly suspect autobiography Betsi later wrote with the help of the Celtic bardess, Ysgafell (otherwise known as Jane Williams), and published in 1857. Betsi spent most of her working life in service in households in Chester, Liverpool and London. In Liverpool she changed her name to Elizabeth Davies because, she claimed, the English struggled to pronounce Cadwaladr. Her Liverpool employers took her all over the continent; she saw the celebrated Mrs Siddons act in Edinburgh, visited Vigo, Saragossa, Seville, Granada and Madrid in Spain, in Paris she saw Louis XVIII ‘come into the city’, was in Belgium at the time of Waterloo, saw Napoleon in Vienna, Vesuvius in Naples and was disappointed by Rome. She returned to Liverpool to become secretly engaged to Captain Thomas Harris of the Perseverance who was drowned two days before the wedding when his ship went down at Black Rock in a thick fog with the loss of all hands except for a ship’s boy (odd that such a disaster rated not a single mention in the newspapers of the time).

In 1820 she worked as nanny to the family of Captain S. and voyaged with them on the Iris to the West Indies. The following year she took up employment as a servant to Captain John Foreman and his wife and travelled with them on their ship the Denmark Hill.  Betsi made an eventful voyage to Van Dieman’s land with the Foremans and their 180 passengers, including a terrible storm in the Bay of Biscay, another storm near the Cape of Good Hope which stripped the ship of three of its masts, the rescue of the 430 crew and passengers of the Thetis which had sunk after being struck by lightning, detours to Madras and Calcutta where she watched open mouthed as living babies were thrown into the Ganges, a visit (inadvertent) to an opium den and a sighting of the Emperor in China, stays in Australia and New Zealand, witnessing an earthquake in Peru and encountering rattlesnakes in Chile.


Eventually she returned to London where she took up a post with Mr G., a lawyer of Birchin Lane. It was while she was in this household that she supposedly met the Kembles, Charles Kemble the actor being an old school friend of the lawyer. Betsi was taken up with the theatricals that took place in the house, though as a servant she was never allowed to join in. One day when she thought she was alone  (it is worth pointing out that this appears to have taken place in the mid 1830’s when Betsi would have been well into her forties) she picked up a poker and brandishing it like a sword began to declaim a lengthy speech from Hamlet. Charles Kemble caught her in the game and  said that he had not seen anyone with such a capacity for tragic acting since his “poor sister” (Mrs Siddons of course) and offered Betsi £50 a night to act for him.


As well as all this Betsi had at least 20 proposals of marriage, including two from Mr Barbosa of Sydney who had sent messages that “he would never marry anyone unless he could marry me.” Existing portraits give no hint of the alluring woman she must surely have once been to attract so much attention from the many bachelors she encountered in the course of her life and travels. She was also left a fortune in the will of another employer, Mr H. In fact Mr H. left his entire fortune to Betsi apart from a house left to his sister; all his household furniture, “many thousands in money, [….] several houses in F___ Street, […] an estate in Wiltshire, […] a farm in Hertfordshire, […]several farms at H_____, and other property.” All this was left to her with the strict injunction not to let his relations have anything at all to do with his affairs. Betsi felt this was not right and told Mr H.’s sister. In short order Betsi found herself deprived of her inheritance worth £4000 a year. But she shrugged the setback off philosophically and applied to work as nurse in Guy’s Hospital, a career change that was eventually to take her to the Crimea…..

“…as a result of reading one of William Howard Russell’s newspaper accounts from the Crimean War of the suffering of the soldiers, she volunteered in 1854 for nursing service in the Crimea. ..... She joined a party of nurses and ‘Sisters of Mercy’ under a Miss Stanley and eventually reached Scutari. This was the main British Hospital and was under the control of Florence Nightingale. Strong-willed Betsy did not like Florence Nightingale and was angry at being made to mend old shirts and sort rotting linen instead of being allowed at the centre of the action, the Crimean peninsular. She therefore left for the hospital at Balaclava and immediately set to work to treat the infested wounds of the soldiers. She nursed the men for six weeks before being put in charge of the special diet kitchen. Being an excellent cook she made sure that the soldiers had good food produced from the best ingredients. However, overwork and ill health meant that she was forced to return to Britain, leaving with a recommendation from Florence Nightingale for a government pension. However, her comments on affairs in the Crimea are extremely scathing and she had little good to say about Florence Nightingale.”