'Say what a Wife should be and She was that'; The Great Churchyard, Bury St. Edmunds 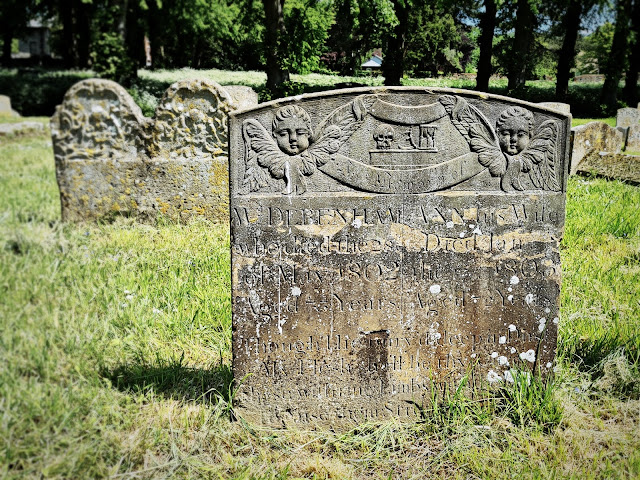 Committed taphophile that I am, when I visited Bury St. Edmunds in Suffolk the sight I was most keen to see was John Baret’s famous cadaver tomb in St Mary’s church.  Baret was a wealthy merchant who died in 1467; his monument was already in the church waiting for him at his funeral as it had been completed 4 years earlier to his own detailed specification. The design is unusual with the shrouded and emaciated cadaver taking centre stage on top of the tomb; most English cadaver tombs show the skeleton or cadaver beneath an effigy of the deceased as he was in life. Alas Covid 19 restrictions meant St Mary’s was closed except for Sunday services even though across the great churchyard the former St James, now the Cathedral, was open and allowing visitors. The churchyard took the edge off my disappointment; it is large, it is old (founded as a burial site in the early 12th century) and it still contains 1200 memorials many of them from the late 18th and early 19th century. The part containing most of the headstones has been allowed to revert back to nature and it was hard to see them in the waist high cow parsley that now covers them. I missed many of the best ones (I really should do my research before I visit) but the ones I did see were impressive. And it was a beautiful day, after a month of almost daily rain and temperatures that struggled to get into the low teens the sun came out in a perfect blue sky and the thermometer hit 20C, spring at last. 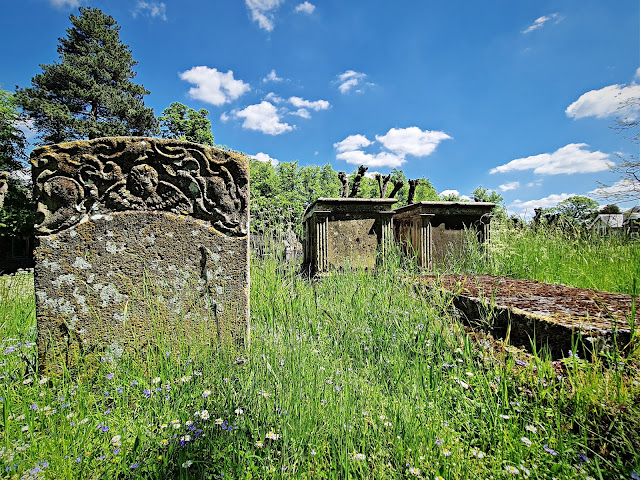 Turning into the churchyard (of Bury Cathedral), which is a beautiful place, you may see the shapeless ruin of the charnel-chapel, a good view of the north side of St. Mary's with the Notyngham porch, and a fine old house of 1730, once the "Clopton Asylum," now devoted to Church uses. In this churchyard it was that on New Year's Day of 1722 Arundel Coke, barrister, invited his brother-in-law Edward Crispe to take a stroll after supper; and had a man waiting with a bill-hook, who fell upon Crispe and hacked him and left him for dead.

Coke went back to his house and said that Crispe would be in shortly, and spoke more truly than he thought, for soon afterwards Crispe did crawl in covered with blood. He was mended up, and Coke and his accomplice Woodburne were tried under the Coventry Act for slitting Crispe's nose. Coke's defence was that he did not intend to slit Crispe's nose, but to kill him; and was insistent to know whether the nose could be said to be slit within the meaning of the statute, when the edge of it was not cut through. Lord Chief Justice Sir Peter King was of opinion that it was duly slit, and Coke was hanged.

M.R. James - Suffolk and Norfolk - A Perambulation of the Two Counties (1930)

The attempted murder of barrister Edward Crispe is the most famous incident that took place in the churchyard. Crispe lived in the churchyard with his wife; his assailants were Arundell Coke his brother-in-law and fellow barrister and a hired assassin; a local thug called John Woodburn. The Whitehall Evening Post of January 18 1722 described the accusation against Coke;

Mr Crispe has charged him with enticing him out of his House, where he and his Wife had been at Supper, into the Church Yard, hard by, on pretence of visiting one Mrs Monk, against whose House Mr. Coke forced him up the Wall and held him while he was knock'd down by a Man, who came up upon a whistle given by Mr. Coke, who bid him strike, which he did with a Hedge bill, or Hook, such as they crop Trees with. One Woodburn a Labourer, a Man of an infamous Character for a common Thief, was suspected to be the Person that committed this barbarous butcherly Act.

Crispe’s injuries were horrific; they were described at Coke’s trial by Sturgeon the surgeon, who had attended him on the night of the attack;

Mr. Sturgeon the Surgeon deposed, that being sent for, came to Mr. Crispe at Coke's, about 11, found him wretchedly cut in seven Places; first from the Right ear thro' the cheek to the Upper lip, just under the nose whereby his Teeth were laid bare, the Jaw-bone damaged, and his Cheek hanging down to his shoulder.  Another on the double Chin, a very deep wound, from the extremity of one Jaw-bone to another. It will be tedious to describe the other wounds, only that of the nose because it was the Gift of the indictment. It was not downwards, nor quite overward; for the ridge of the Nose was not touch'd. Only on the Right side of the Nose, where the Nostril begins to stand out, it was cut through, so one might see into the Nostril ; but neither Bone nor Gristle was cut or dannified.  The Wounds not healed were all opened and shown to the Court and Jury.

Coke and Woodburn were prosecuted under the Coventry Act against malicious maiming with intent to mutilate. Their defence, ingenious but fatally flawed, was that they were not guilty because their intention had been to murder Crispe rather than mutilate him. They were found guilty and were the only two men ever to be executed under the act. 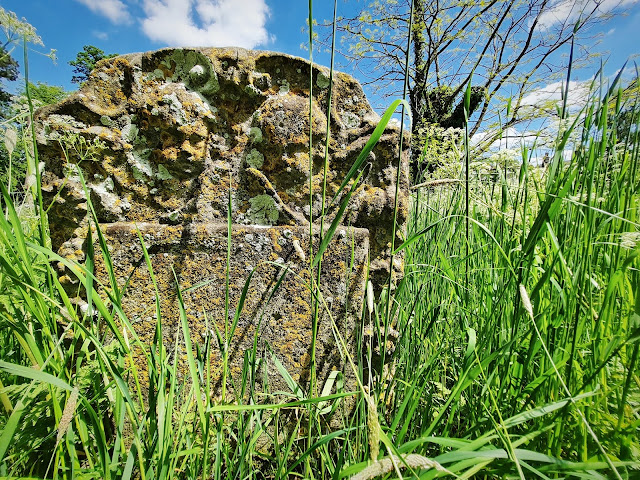 As we walked through the churchyard in the evening, we found ourselves in the company of a hooded figure who swore and screamed, not at us apparently, but at some voice only audible to himself. With no boundary walls or fences the churchyard has long been a place of resort for the citizens of Bury with no better place to go. A concerned citizen wrote to the Bury and Norwich Post in August 1882;

THE CHURCHYARD at BURY ST. EDMUND'S. Sir,— lt is rather a painful contrast to pass from the interior of either of the beautifully restored Churches of St. Mary or St. James, where the wants of the living worshippers are so well cared for, into the adjacent Churchyard, where the neglected forefathers of the town sleep. The Churchyard seems a mere play- ground for children, and the graves and tomb- stones are a lounging- place, if not worse, for idle men and women. Various remedies suggest themselves; the several plots of the Churchyard could, at no great cost, be enclosed with iron railings; or a proper recreation ground could be provided for the youth of Bury. It would surely be better to apply to the Bishop for permission to make the Churchyard into a public garden for the use of the town, than to see it as it is sadly and shamefully desecrated, whilst pretending still to be hallowed ground. In common, I doubt not, with many others, it would be a pleasure to be allowed to help forward a project which would conduce to the com fort of the living and the honour of the dead, and I venture to press the subject in your columns, because I can sign myself, Your obedient servant, A NATIVE OF BURY ST. EDMUND'S. 11th August, 1882

There were further complaints in the newspaper and in 1886 a leader commented that attempts to deal with the behaviour of the ‘idle men and women’ of the town who used the churchyard had been given up by the council a few years previously because the problems were ‘insurmountable’. “Since then,” the journal said “the evil has certainly grown less obnoxious; perhaps we might say it has not increased. To this end one or two things have contributed, notably the opposition offered to the licensing of the Six Bells, and the action of the Church in transforming that property to its present laudable use. But the snake is only scotched: it is not killed, and that, for the honour of Bury, is what is required. There are those in the town, doubtless, who would favour a scheme of inclosure, and to that it may be necessary to resort. So much opposition would be aroused by this, however, that it is just as well to see if there is not some less heroic method. We believe there is, and have no hesitation in mentioning it. Make it a matter of police, and the abuse can be stopped in a fortnight. Let the magistrates show by two or three sharp convictions that they are determined to keep the churchyard free from the characters who resort to it, and the evil will sink to very small proportions.” 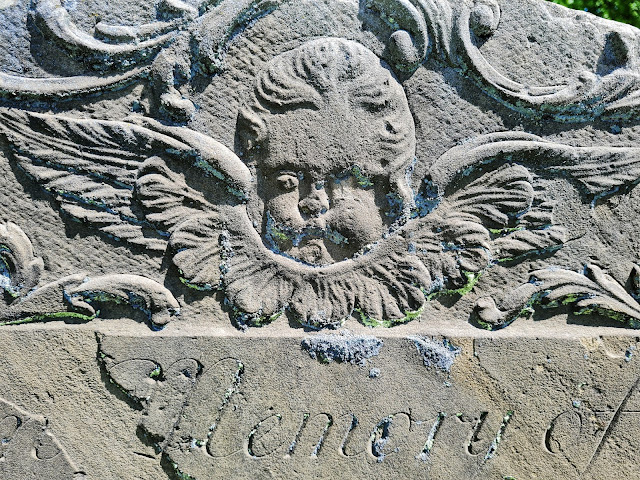 The great churchyard is noted for the quality of its epitaphs, most of which are sadly now illegible, wind, rain and frost having taken their toll on the headstones. A memorial tablet on the external wall of St Mary’s reads:

The churchyard contains the remains of a 13th century charnel house (once used to store the bones of the disinterred dead, moved to make space for fresh burials) which is now covered in memorial tablets. The most famous belongs to a young girl killed by lightning; 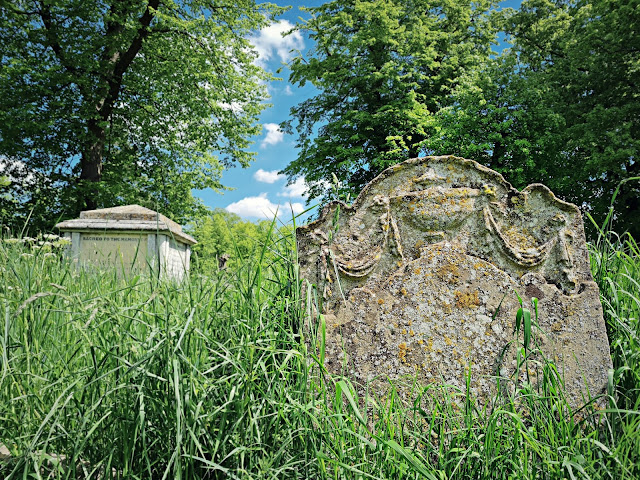 Here lies the remains of L. Gedge, Printer.
Like a worn-out character, he has returned to the Founder,
Hoping that he will be re-cast in a better and
more perfect mould. 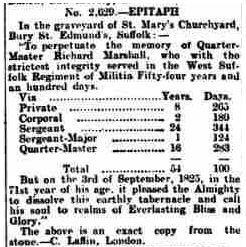 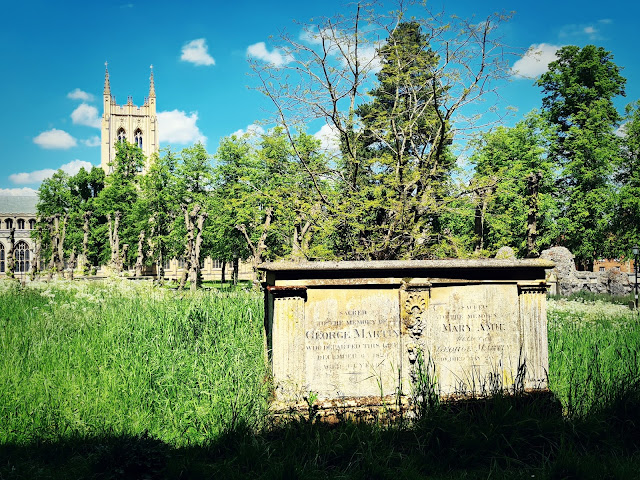 The Public Ledger and Daily Advertiser of Tuesday 25 December 1821 reveals this possibly apocryphal epitaph from the great churchyard;

The following Epitaph appears on a stone in the church-yard Bury St. Edmund's:— Here lies Jane Kitchen, who when her glass was spent She kick’t up her heels, and away she went.

I’m sceptical because on Saturday 19 January 1861 a correspondent to The Suffolk Chronicle or Weekly General Advertiser & County Express attributed a very similar epitaph to one Joan Butcher:

To the Editor of the Suffolk Chronicle, Mr. Editor, —You had some peculiar epitaphs in a recent number. I send herewith some equally peculiar:— Formerly in the Churchyard at Bury St. Edmund's. Here lies Joan Butcher, who, when her breath was spent, Kicked up her heels and away she went.

By 1883 Jane Kitchen or Joan Butcher had become Deborah Dent, and her epitaph was being reported in various newspapers including the St. Andrews Gazette and Fifeshire News on 17 February: A churchyard near Bury St Edmunds has the following couplet : Here lie, the body of Deborah Dent, She kicked up her heel. and away she went.

Burial records for the great churchyard list none of the three heel kickers as having been buried there. 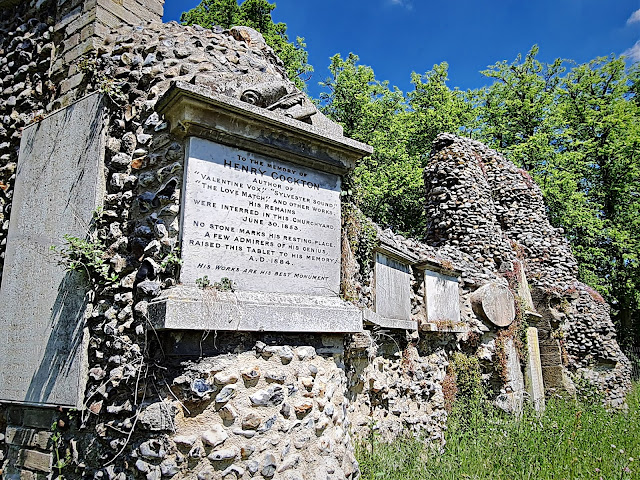 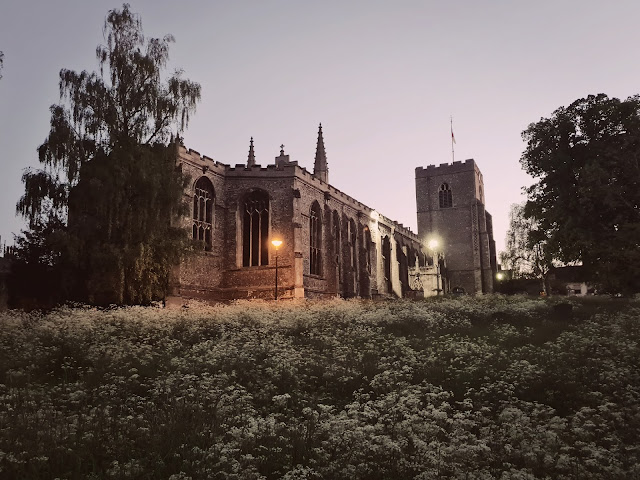