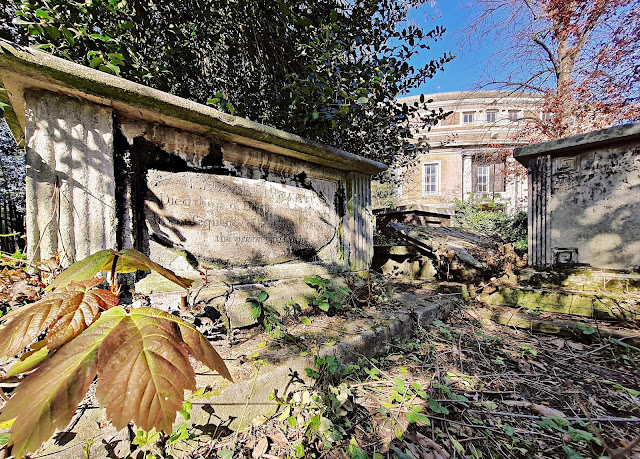 The most remarkable tomb in the church yard is that of the late Alderman Pickett's family. It was erected by the alderman in memory of his father and mother: it commemorates also the melancholy and untimely fate of his daughter Elizabeth, who died Dec 11 1781 “in consequence of her clothes taking fire the preceding evening”. The inscription adds “Reader if ever you should witness such an afflicting scene, recollect that the only method to extinguish the flame is to stifle it by an immediate covering.” Alderman Pickett, who is known to the public as the projector and promoter of the plan for widening the streets to the west of Temple bar, was buried in the family vault at Stoke Newington Dec 24th 1796.

Although I have written before about St Mary’s in Stoke Newington I did not come across the story of the death of Elizabeth Pickett (or Piggot as she is recorded in the burial register) until I read about it in Jean Sprackland’s excellent “These Silent Mansions”. When I found myself in Hackney a couple of weeks ago because of work I could not resist paying a quick visit to the churchyard to search out the grave (which for once I found without too much difficulty). The Salisbury and Winchester Journal of 17 December 1781 gives a full account of Elizabeth’s horrific death;

On Monday night, a Miss Pickett, daughter of Mr. Pickett, Ludgate-hill, was standing by the fire, a spark flew unobserved upon her apron, which almost in an instant set it in a blaze, and communicated to her gown, handkerchief, and cap, with the most alarming rapidity. Unhappily there was no person in the room at the time but Mr. Pickett, who, for a few moments, was bereft of all sense and motion, in this situation the unfortunate young lady flew to him for relief, and at length roused from a situation no words can describe, he struggled (at the imminent hazard of his life) to stifle the flames, and save his child; the fire was extinguished with much difficulty , although several people, who were in the house, alarmed at the noise, had come to their assistance. The unfortunate young lady was immediately carried to her bed, where she remained for twelve hours in the most excruciating torture, and then expired.

Elizabeth’s father was Alderman William Pickett, a successful goldsmith who became Lord Mayor of London in 1789. As Daniel Lyson’s noted in 1811 the Alderman was best remembered for his scheme to improve communication between Westminster and the City by removing Temple Bar and widening the Strand. He died in 1796 and joined Elizabeth in the vault beneath the chest tomb. An encomium in the Monthly Magazine for December 1796 states that the tomb was erected by the Alderman “on the melancholy death of his daughter Elizabeth and also in memory of five other children viz Thomas, Thomas, Anne, Edward and George who died in their infancy.” The Magazine says that on the North side on the tomb is the epitaph for Elizabeth;

So unaffected, so compos’d a mind
So firm, yet soft, so strong, yet so refin’d
Heav’n, as pure gold, by flaming tortures tried:
The angel bore them, but the mortal died

After losing five children in infancy and watched his 23-year-old daughter burn alive perhaps Alderman Pickett’s death was hastened by the final straw of the news of his remaining son’s death earlier in 1796. An inscription on the tomb reads:  Lieutenant William PICKETT, in the Honb East India Company’s Service was slain by Pirates on board the TRITON in the Bay of Bengal on 29th June 1796, aged 36 years. The date of death is not correct as newspapers were reporting on the capture of the Triton by pirates and the death of several of her crew as early as the 4th June. Lieutenant Pickett was an army man and may have been returning to India after a period of sick leave in England. Most accounts say the attack on the Triton took place on the 10th February.  The Kentish Weekly Post or Canterbury Journal of Tuesday 26 July 1796 describes how the Triton fell into the hands of French privateers;

CAPTURE or the TRITON. We have been favoured with a Gazette from the island of Mauritius in which is stated at length the particualrs respecting the capture of the Triton , from the declaration of the captain of the Modeste, French privateer, upon oath, before the Assembly at the Isle of France.

“The Captain of the Modeste, of 18 guns, cruising near the Braces in January and February last, had taken several prizes laden with rice, &c among which were three pilot schooners, one of which they armed, and -cruized in company until the beginning of February, when the Triton coming from Madras, was supposed to be an American ship, conducting to Calcutta by one of the pilots.

The Modeste supposing her to one of the large country ships, hoisted American colours, and the schooner English; under this deception they stood towards the Triton, with a determination to board her from the schooner, with 17 or 18 picked men from the Modeste; she ran along-side,' lashed her bowsprit to the Triton's fore-chains, and boarded with all her men, without meeting the least refinance; the Triton not perceiving that they were French until they were actually on deck.

Capt. Burnyeate, instead of ordering all hands upon deck, commanded them to take to their guns below. At this instant the Frenchmen cut away all the port ropes, and a skirmish immediately commenced upon deck. We shall not wound the feelings of our readers repeating the unfortunate confluences that attended it.

The French Captain speaks highly of Lieut. Pickett, who defended himself to the very last moment with great gallantry, in one the pantries on the quarter deck, when he was at length killed by a ball from a pistol. As soon as the pirates had complete possession of the deck, the people below, supposing the French to more in number than they were, surrendered themselves prisoners and were secured in irons to the number of one hundred and-fifty. The privateer lost one killed, and one was slightly wounded.”

The Modeste sailed for Mauritius with her prize in something of a hurry as they had not realised, until it was too late, that they had boarded an English man of war.  Fearing a pursuit by the navy and the inevitable hanging that would follow being captured they took another English ship the following day, the Harriet, ransomed her (in other words made the Captain hand over all valuables on board) and transferred the 150 British prisoners on board. When Charles Pippon the fourth mate of the Triton finally arrived in London in July, he immediately reported to India House to give his account of the affair. The newspapers reported that “to the determined bravery, and gallant, though unsuccessful resistance of Lieutenant Pickett he gives the most warm and decided eulogium – this spirited officer had killed one of the pirates, and wounded another, when a ball from a pistol put an end to his existence.” 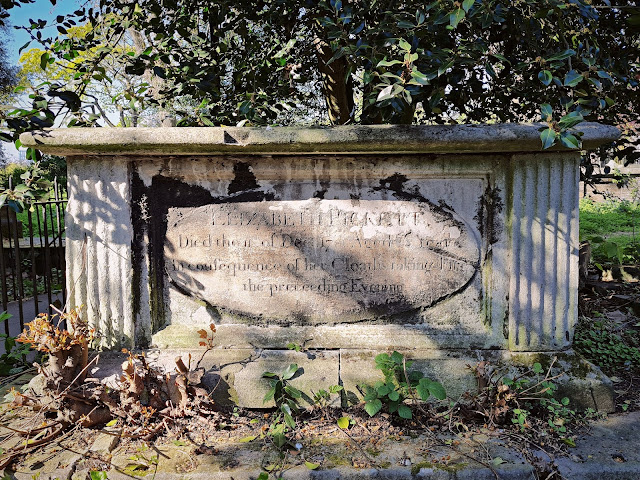