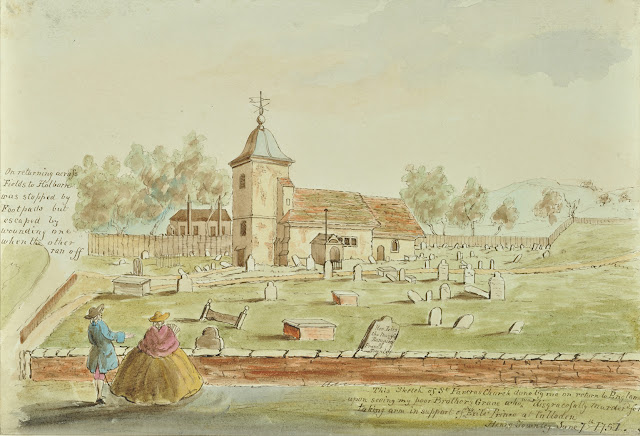 I came across this bucolic view of Old St Pancras church, with the old west tower and lead cupola, in the London Picture Archive. Dated June 7th 1756 the watercolour shows a periwigged gentleman in a blue frockcoat, pink breeches and felt round hat and a woman with voluminous yellow shirts and matching wide brimmed bonnet who fans herself as they take in the rustic view of the church from the South West, enclosed by a low wall and surrounded by trees, with the hills of Hornsey and Haringey in the distance. Even at this early date most of the headstones in the churchyard incline several degrees from the vertical and many look almost at the point of toppling over. Only one epitaph is visible, the unlikely sounding ‘Here lies the mangled remains of Francis Townley’. The artist, Henry Townley, had an eventful day out; an annotation at the side of the picture says “On returning across the fields to Holborn I was stopped by footpads but escaped by wounding one when the other ran off.” Henry was clearly not a man to be trifled with. At the bottom of the picture, he explains that “this sketch of St. Pancras church done by me on return to England upon seeing my poor Brothers Grave who was disgracefully murdered for taking arm in support of his exiled Prince at Culloden.” The mangled remains Colonel Francis Towneley were buried at St Pancras on 31 July 1746 the day after he had been hung, drawn and quartered along with 8 other Jacobite rebels at Kennington. As his bowels had been drawn and burnt whilst he was still alive and his head was removed to a spike on Temple Bar there would have been relatively little of him to inter in the churchyard. I wondered if this is why the parish burial register notes that his relatives were only charged a ½ fee for the vault to be opened; a discount applied by a considerate sexton because the deceased’s mortal remains were incomplete? Further examination of the register brought further examples of half fees to light, so perhaps not.

Francis Towneley was born in 1709 at Towneley Hall in Burnley, the fifth son of staunch Catholics Charles and Ursula Towneley, His uncle Richard had joined the Jacobite army at Preston in 1715 and had been taken prisoner when the town surrendered. When he was put on trial a local jury acquitted him, revolted by the news of Colonel Oxburgh’s brutal execution at Tyburn. At the age of 18 Francis went to France and accepted a commission in the French army.  According to Walter Thornberry he served the king of France “for fifteen years, being at the siege of Philipsburg, and close to the Duke of Berwick when that general's head was shot off.” He returned to England in 1740 and joined the rebellion of Bonnie Prince Charlie in 1745, accepting a commission as a Colonel in the Manchester Regiment. Francis was foul mouthed, “his fashion of hard swearing called forth an impromptu rebuke from one of the townsmen” according to Albert Nicolson in the DNB. He was also a dandy; at the retreat from Derby he rode a bay horse, had a white cockade in his hat and wore a plaid sash. When the Jacobite army fled to Scotland Towneley and the 114 men of the Manchester Regiment remained at Carlisle with 200 Scottish troops to somehow impede the progress of the Duke of Cumberland and the Redcoat army. Colonel John Hamilton was left in charge and surrendered the garrison almost as soon as the town came under siege.

Towneley and the other Jacobites went on trial in London on 13 July 1746. Inevitably they were all convicted and the officers condemned to death for high treason. The execution took place on 30 July at Kennington in front of a crowd of thousands. This account appeared in the Derby Mercury on 01 August:

At the Gallows they were not attended by any Minister, either of the Protestant or Catholick Religion. All the Assistance they had in their last Moments was from Mr. Morgan, who read to them Prayers and other pious Meditations, out of a Book of Devotion to which they all seemed very attentive, and behaved with a great deal of Seriousness. When they had finished their Devotions every one of them took some written Papers out of the Book which Morgan had in his Hand, and threw them amongst the Mob, The Contents of the Papers were, that they died in a just Cause; that they did not repent of what they had done, and doubted not but their Deaths would be revenged; with several other treasonable Expressions. They were then tied up to the Gallows, and in about five Minutes the Executioner cut down the Body of Mr. Townley, and laid it on a Stage for the Purpose. The Body being stripped, and laid at Length, having some Signs of Life in it, the Executioner struck it several Blows on the Breast, then cut off his Head, took out his Bowels, and flung them into the Fire near the Gallows. The next he cut down was Counsellor Morgan, which he laid on the Stage, and served in the fame manner; and so, of the rest, till he had finished the whole Execution. Dawson was the last; and when the Executioner had thrown his Bowels and Heart into the Fire, the Spectators gave three loud Huzzas, and at the same time crying out, God bless King GEORGE, and all the Royal Family.

According to Thornberry in front of the huzzaing crowd of Hanoverian loyalists a “monster — a fighting-man of the day, named Buckhorse — is said to have actually eaten a piece of Towneley's flesh, to show his loyalty”. The fiancée of one of the other men executed, James Dawson, was reputedly so traumatised by seeing her lover executed that as he was disembowelled, she cried out "My dear, I follow thee — I follow thee! Lord God, receive our souls, I pray Thee!" and died on the spot. Low farce followed high tragedy that day at Kennington – the hangman and his assistant had so many heads to juggle with that the crowd lost track of which belonged to who and began to lay bets on which was Colonel Towneley’s. Apart from the Colonel the decapitated bodies were sent for burial at the Foundling Hospital; the heads were covered in pitch and Towneley and Fletcher’s were sent to Temple Bar to be impaled on spikes. The rest were despatched to the north to be displayed in Manchester and Carlisle. On August 15th Horace Walpole, wrote to a friend telling him about an excursion into the city where he had "passed under the new heads on Temple Bar, where people make a trade of letting spy-glasses at a halfpenny a look."  On 20 January 1766 a man was arrested by the watch according to the Gentleman’s Magazine; “between three and four in the morning a person was observed discharging musket balls from a steel cross bow at the two remaining heads upon Tempie Bar.  Upon searching him above fifty musket balls were found in his pock wrapt up in a paper with this motto Eripuit ille vitam.” Thornbury says “on being questioned by the puzzled magistrate, he affected a disorder in his senses, and craftily declared that the patriotic reason for his eccentric conduct was his strong attachment to the present Government, and that he thought it not sufficient that a traitor should merely suffer death; that this provoked his indignation, and it had been his constant practice for three nights past to amuse himself in the same manner.”

The headless trunk of the gallant Colonel Towneley, a Lancashire gentleman of long descent, who commanded the Manchester regiment the Pretender’s service, was buried in old St. Pancras churchyard. The Colonel’s head was, I have heard, until very lately, preserved in a glass case in the drawing-room of London mansion, the property of a lineal descendant of the ill-fated Jacobite gentleman who was slaughtered at Kennington. I think that this interesting relic has since received reverent interment.

The two heads remained upon Temple Bar until the early 1770’s when first one and then, a few days later, the other were worked off their spikes by a particularly brisk wind and dropped to the ground. The Towneley family obtained possession of one of the heads, the one presumably that they judged to belong to Francis. Katharine Grant, a lineal descendent, wrote in the Guardian in January 2014 (and in many other places and at many other times) about the fate of the ancestral head;

Pitch being an efficient preservative, and making allowances for weather and birds, Frank was in pretty good nick. Such good nick that in due course he was taken back to the patriarchal home, Towneley Hall, Burnley, and stuck behind the panelling in the family chapel, where he remained until central heating precipitated relocation. Resettled in a basket, and loosely shrouded by a napkin, he moved to the sideboard in the dining room to be passed round with the port. Perhaps he proved unpopular with guests, for he didn't last on the sideboard. In the end he was popped into a hatbox and returned to London, to Drummonds Bank in Trafalgar Square. It wasn't until after the second world war that he travelled north again, still in his hatbox. By that time, Towneley Hall had been sold to the Burnley Corporation, so my great-grandmother received him at Dyneley, the agent's house, to which the family had removed, and from there he was buried in St Peter's church along with other relations.