To hatch a crow, a black rainbow.... cemetery wildlife 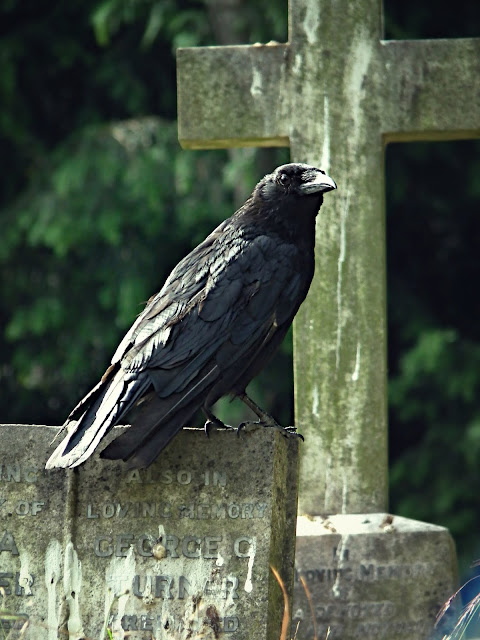 For places dedicated to the dead cemeteries are surprisingly full of life. This is particularly true of the neglected ones which are reverting back to nature, which in England is probably the majority of them. My principal interest in cemeteries is the monuments so there are times when I find the return of untrammelled nature a bit of curse (try finding an out of the way memorial without a machete in the rampant undergrowth of Abney Park or Nunhead) but generally speaking I get a bit of a thrill when I disturb a fox or startle a deer and I always enjoy the company of the crows and the parakeets who are more or less constant companions in all London cemeteries these days. I don’t go out of my way to photograph cemetery wildlife but if I am circling a grave, camera in hand, looking for a good angle and happen to spot an example of the local fauna it isn’t much effort to click the shutter.

My favourite cemetery animal is Corvus corone, the carrion crow, cunning survivalists, scavengers, nest thieves, habitual cemetery dwellers who would happily consume the dead if they were given the chance but make do with worms, grubs, beetles, discarded garbage and the chicks of other birds if they can’t. I love their walk, half way between a waddle and a strut, like a corpulent parson. I love their stylish colouring; everything in one shade, starless and bible black. I photographed the one above in Brompton Cemetery. 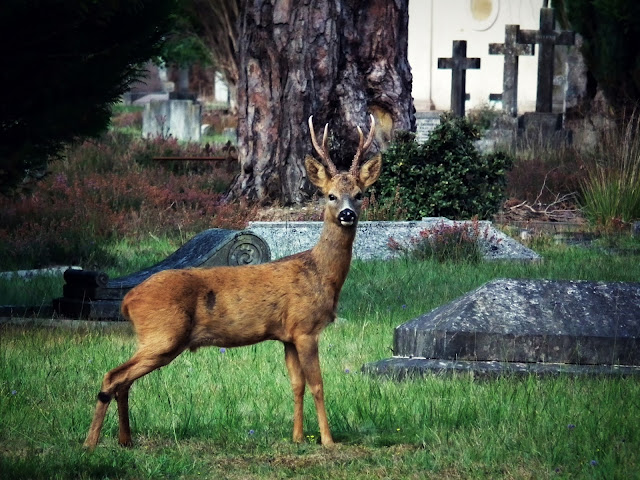 On my first ever visit to Brookwood Cemetery I spent almost as much time deer stalking as looking at the graves. I spotted a Roe deer when I was sitting in the sun eating lunch. He allowed me close enough to take a photo and kept appearing amongst the graves as I spent the afternoon wandering the almost deserted cemetery. I started to follow and take more photos and the sunny September afternoon whiled itself away very pleasantly as I tried to get a decent photo of my quarry. You don’t see deer often in London cemeteries but in other parts of the country they are common and bold enough to have become a pest because they can’t resist snacking on funeral flowers. 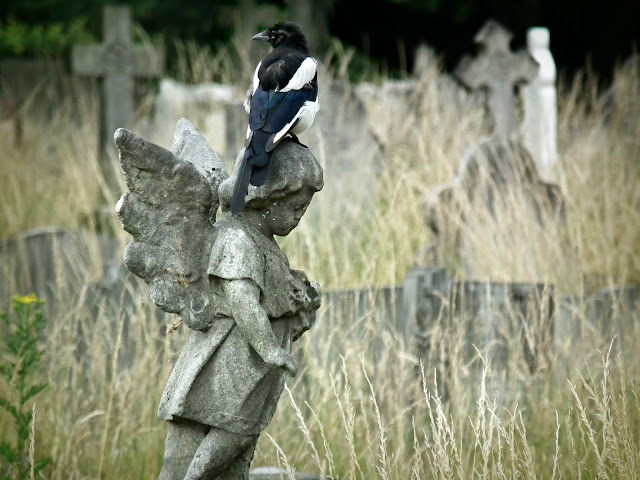 A magpie (Pica pica) photographed at the City of London Cemetery in Aldersbrook. Brueghel the Elder’s last painting was Die Elster auf dem Galgen, the magpie on the gallows; on his deathbed he instructed his wife to destroy several of his paintings but told her to keep this one. Magpies were famed as gossips and it was proverbial that gossip led to hangings. What message Brueghel was trying to give his wife isn’t clear, except perhaps to her. In England the number of magpies seen is a crude method of divining the future and was first recorded around 1780 in a note in John Brand's Observations on Popular Antiquities:

One for sorrow,
Two for mirth,
Three for a funeral
And four for birth 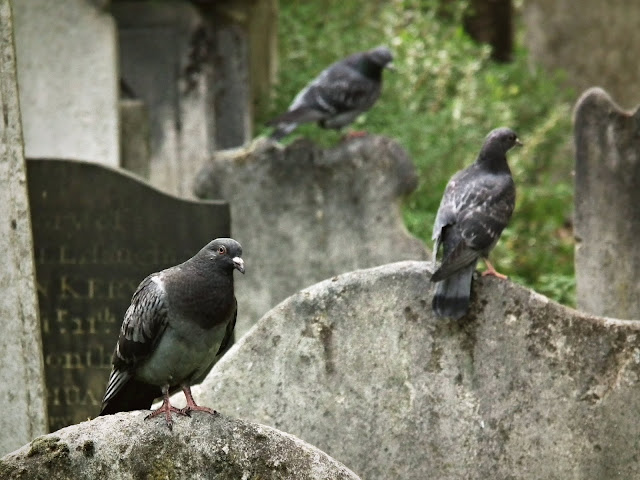 Feral pigeons (Columba livia domestica) photographed in Bunhill Fields. How any animal so apparently stupid could become so successful is a mystery. Like the brown rat, the cockroach and the head louse these pests exist in perfect symbiosis with that other rampantly over-successful species, Homo Sapiens. Cooing pigeons are a constant of city life and are common in cemeteries. They seem to prefer the less overgrown ones as anything resembling a natural habitat can prove a little challenging for them. 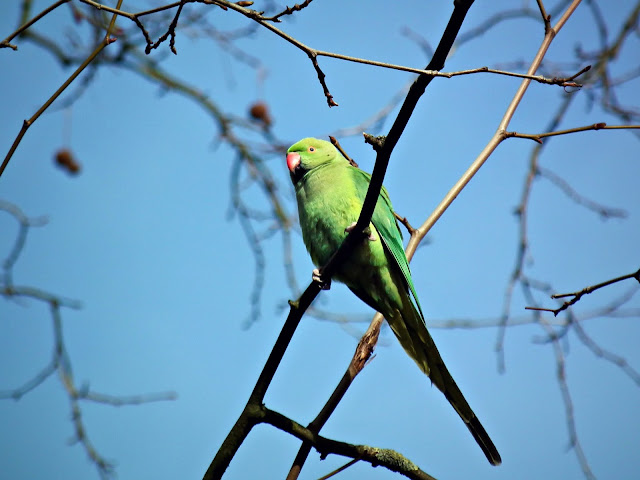 I photographed this example of Psittacula krameria, the rose-ringed or ring-necked parakeet in Chingford Cemetery in February. Flocks of bright green parakeets are now a relatively common sight all over London and like of all people of good taste they love cemeteries. I’ve seen them in Kensal Green (they roost there in huge numbers), Margarvine Cemetery in Hammersmith, Abney Park in Hackney, Hither Green Cemetery in Lewisham and probably several more that I can’t remember off the top of my head. Oft repeated urban myths abound in how the capital came to have its rapidly expanding parrot population; they escaped from the set of the African Queen at Ealing Studios in 1951, they are all descended from a breeding pair released by a stoned Jimi Hendrix in Carnaby Street in the 1960’s, they escaped from a pet shop in Sunbury-on Thames in 1970, they escaped from aviaries damaged by the great storm of 1987, or they were accidentally released by Boy George and George Michael during a drunken row at  a flat they shared in Brockley in the 1980’s or by burglars unwittingly opening the cage of an aviary in George Michael’s house in Hampstead in the 90’s. Maybe all of these rumours are true or maybe they escaped en masse elsewhere or perhaps they simply made a bid for freedom in their ones and twos over the last half century and all met up in the local graveyard and made babies. But there are a lot of them now and global warming and exotic migrants of all stripes are gradually turning London into a tropical city. 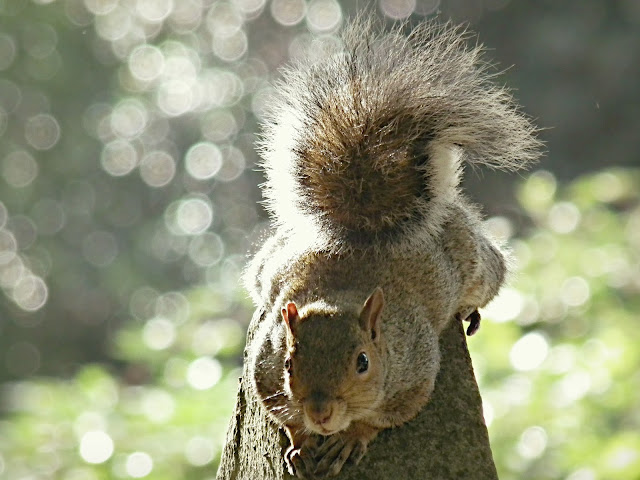 The common grey squirrel (Sciurus carolinensis photographed above in Brompton Cemetery) is another migrant, from the United States. It is commonly denounced for being responsible for the decline of the diminutive and infinitely more attractive native red squirrel but as the last people to see a Sciurus vulgaris in the vicinity of London were probably the Romans, in truth it was moving into an empty niche when it occupied the parks and cemeteries of the great wen. A prolific breeder and minor pest it has never become le succès de la cuisine here that it has elsewhere and which might help to restrain the burgeoning population. If anyone fancies trying it The Wild Meat Company have a delicious sounding recipe for squirrel with chorizo stew, slow-cooked with onions, tomatoes, garlic, butter beans, chilli and smoked paprika.
Posted by David Bingham at 04:45