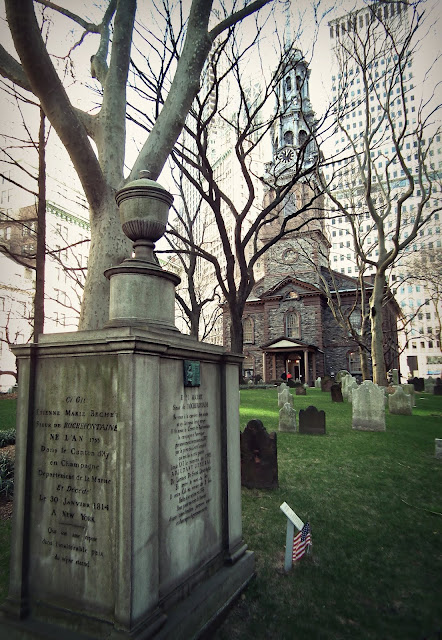 An English gentleman, Mr. John Lambert, who visited New York in 1807, when the entire city lay below Canal Street, was severely critical in regard to the churchyards on Broadway. In his diary, after speaking of Trinity Church, and St. Paul's as "both handsome structures," he added: "The adjoining churchyards, which occupy a large space of ground, railed in from the street, and crowded with tomb-stones, are far from being agreeable spectacles in such a populous city.” The population of New York in that year, as he gives it, was 83,530, and in our more modern eyes would betoken rather an overgrown village than a metropolis.  In still another part of his journal, Mr Lambert returns again to the assault on the churchyards, and insists that they are "unsightly exhibitions." “One would think,” he says, "there was a scarcity of land in America to see such large pieces of ground in one of the finest streets of New York occupied by the dead. The continual sight of such a crowd of white and brown tombstones and monuments as is exhibited in the Broadway must tend very much to depress the spirits.” 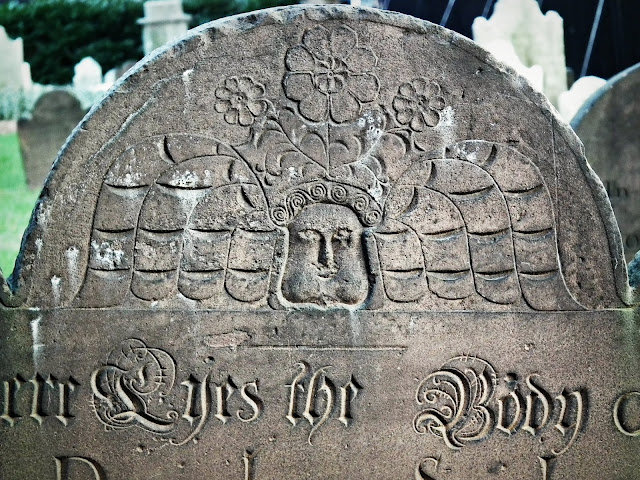 It looks out of place, a 250 year old English Georgian church and its neat little churchyard nestled beneath the soaring skyscrapers of Lower Manhattan, just across the road from the World Trade Centre.  It was built in 1766 as a chapel for ease for Trinity Church on Wall Street, on land donated by Queen Anne that stood on what were then the banks of the Hudson. Architect Thomas McBean based his design on St Martin-in-the Fields but the Manhattan mica-schist and brownstone quoins give the English architecture a distinctly new world flavour. Land reclamation has pushed the waterfront back half a mile since the chapel was built and it now stands smack in the middle of Lower Manhattan, almost equidistant between Brooklyn Bridge on the eastern shore and the North Cove yacht harbour on the western. It has led a charmed life, surviving the Great Fire of New York in 1776 (parishioners formed a bucket chain to bring water from the river up to the building) and the destruction of the Twin Towers on September 11. 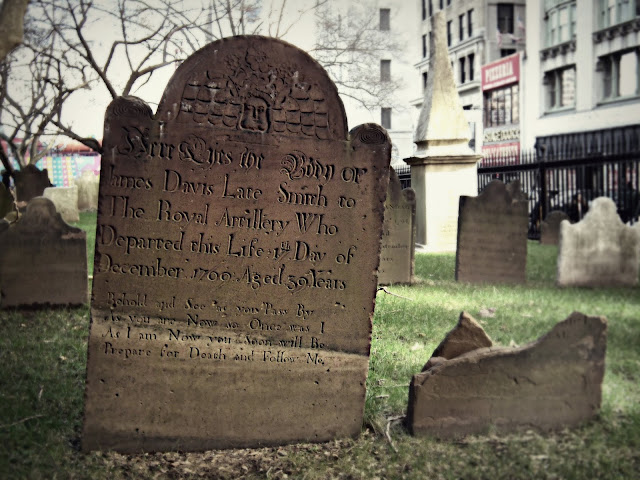 John Flavel Mines, born in Paris in 1835 was a preacher who entered the Union army as a chaplain to a Maine regiment in 1861 during the civil war of independence and was captured by the confederates when he stayed behind on the battlefield at Manassas to succour the wounded. He published a book of verse, ‘Heroes of the Last Lustre’, in 1858 and in later life became a newspaperman who wrote prose sketches under the name Felix Oldboy and a book ‘A Tour Around New York.’ He died in 1891 and was buried in Cypress Hill Cemetery in Brooklyn. Some previously published sketches about the churchyards of Lower Manhattan were published posthumously in 1893 as ‘Walks In Our Churchyards’. Mines’ writing is still lively and accessible; his graveyard book is short and still readable but not always accurate. Many of the graves he mentions in St Paul’s churchyard are still easily found;

Near the west entrance is a stone to the memory of James Davis, "late Smith in the Royal Artillery, who died in December, 1769, aged 30 years”  and nearby it is a still older and less legible slab which commemorates John Jones and perpetuates this poetry that evidently came from his wife's hand:
O most cruel sudden Death
Thus did take her husband's breath,
But the Lord he thought it best

Headstones have perhaps been cleaned since Mines examined them in the 1880’s. It is now quite easy to read that John Jones (son of John Jones) died on December 15 1768 and was a child aged 4 years, 4 months and 2 days. The epitaph which Mines identified as being written by Jones wife actually reads: 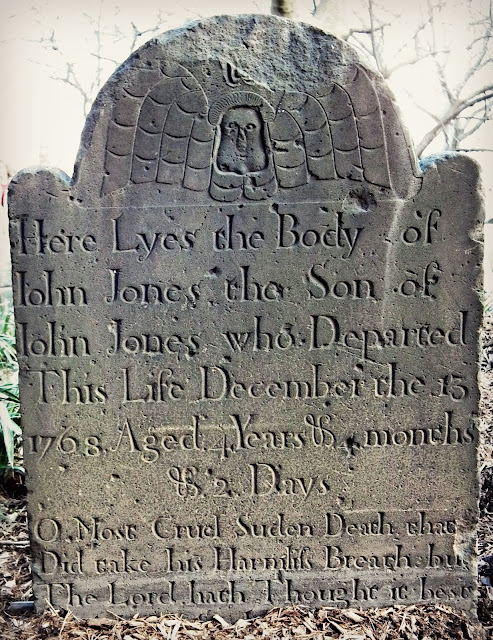 Most of the headstones from the mid eighteenth century are decorated with the distinctive stylised winged cherubs that are known as soul effigies. These distinctively American grave icons bear distinct affinities with similar stylised iconography in certain areas of England but the fashion for them continued for longer in the US and stonemasons developed them in distinctly American ways including those fleshy, heavy jowls, the web like wings and the flower motifs. Again as in England, the willow and urn was a common 19th century motif but the very typical example seen below is different to the treatment it would receive on English headstones.

Impressive obelisk and column memorials stand at the Broadway end of the churchyard, both commemorating Irish patriots, members of the United Irishmen, firm friends in life but who are both buried elsewhere. On the south side of the church is the obelisk of Thomas Addis Emmet, who was arrested and imprisoned by the English for plotting the failed Irish rebellion of 1798. After his release from prison in Scotland he fled to Brussels and later France before emigrating to the United States where he became a successful lawyer and eventually Attorney General of New York State. When he died in 1827 he was initially buried in St Mark's-in-the-Bowery Churchyard in the East Village.  In 1922, at the request of his grandson, he was exhumed and reinterred in Glasnevin Cemetery in Dublin. On the north side is the column memorial of Dr. William James MacNeven, the Father of American Chemistry, who came to the United States in 1805 after failing to convince Napoleon to send French troops to help liberate Ireland. As a Catholic he had not been able to study in Ireland and he received his higher education in Prague and his medical degree in Vienna. In New York he joined the faculty of the College of Physician and Surgeons initially as professor of midwifery before becoming professor of chemistry in 1810. He died in 1841 and was buried on the Riker Farm in the Astoria section of Queens, NY. 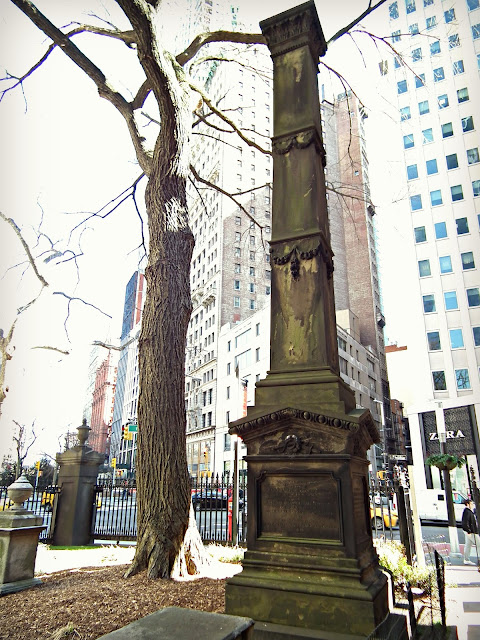 Notable burials in the churchyard include George Frederick Cooke the actor who was famous in London and New York. His most acclaimed role was Richard III and he was the great rival of Charles Kemble. He was a notorious sot and his excessive alcohol intake eventually began to erode his talent. Disgruntled with repeated savaging at the hands of the London press he took himself off to tour America in 1810. He never made it home, dying of cirrhosis in the Mechanic’s Hall in Manhattan in 1812. His monument in the churchyard was erected by Edmund Keen during his American tour in 1821.According to John Joseph Knight in the 1887 edition of the Dictionary of National Biography whilst arranging for Cooke to be reburied Keen “abstracted one of the toe bones, which he kept as a relic, compelling all visitors to worship it until Mrs. Kean, in disgust, threw it away.” An even odder story is that Cooke’ head was removed during an autopsy and his skull kept by Dr John Francis who later wrote the book ‘Old New York’. Francis claimed to have loaned the skull to be used as Yorick during a benefit performance of Hamlet. Stories say Cooke’s headless ghost still roams the churchyard on moonless nights. 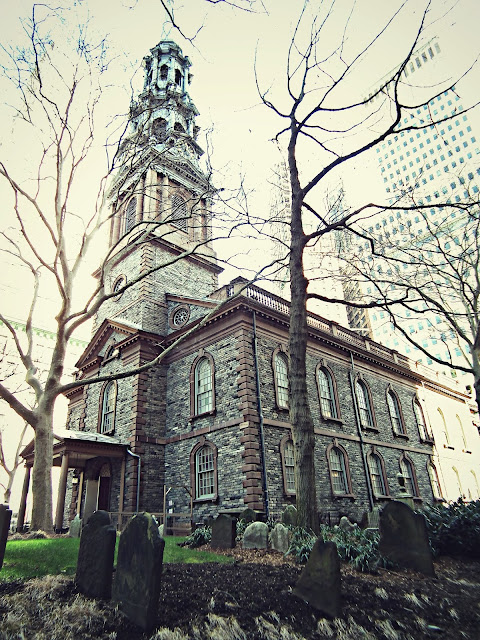