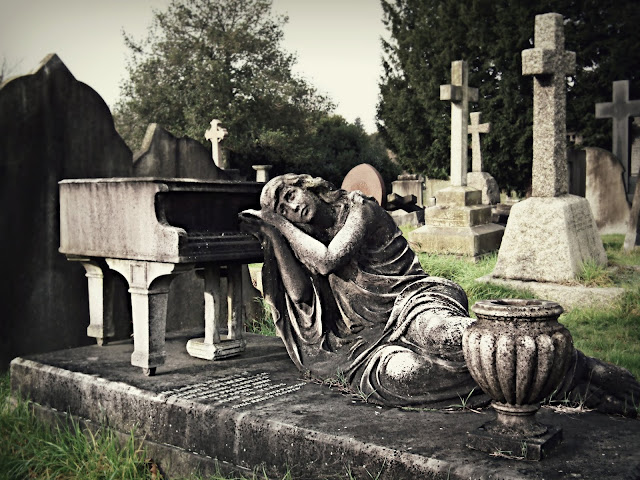 “City of London Cemetery…..mostly obelisks and angels on pedestals provide the principal accents. An eccentricity is the memorial to Gladys SpencerW1931 with piano and reclining figure”
Pevsner Architectural Guides: Buildings of England - London East (2005)

It is the City of London Cemetery’s best known memorial; apart from William Haywood’s mausoleum it the only one considered worthy of mention in Pevsner even if that is only as an ‘eccentricity’. It is much photographed and much loved as it strikes a rare note of individuality in a vast cemetery (200 acres) of 150,000 burials. I didn’t think to check for a  mason’s mark but the memorial was almost certainly the work of one of the local east end firms who generally specialised in turning out standard angels by the ton but could occasionally surprise when given the opportunity to produce something more original. Compared to cemeteries in Italy, France, Spain, Germany or any other continental country, even the best known English memorials are generally not of high artistic merit. There is often something homespun, almost amateurish, about them and this is certainly true of the Spencer memorial. 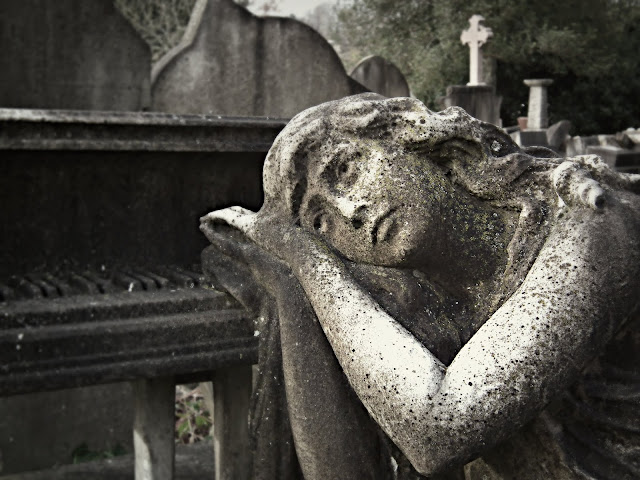 The epitaph reads “In Loving Memory of Gladys Spencer LLCM.  My darling Gladeyes who passed away 6th April 1931 Aged 34 years. The gardener hath plucked a still rarer flower”. LLCM is a Licentiate of the London College of Music. The last line about the gardener isn’t a quote though may have been influenced by Wordsworth (“Pluck that rose, it moves my liking,” Said she, lifting up her veil; “Pluck it for me, gentle gardener, - Ere it wither and grow pale.”) In the official guide to the cemetery Gladys is described as the ‘piano lady’ who was “a young and dance teacher who worked at the Classical Academy of Music and Dancing in Rixon (sic) Road, Manor Park. Gladys was also well known for her local charity work and many were saddened by her death at the early age of 34 years on Easter Monday 1931.” 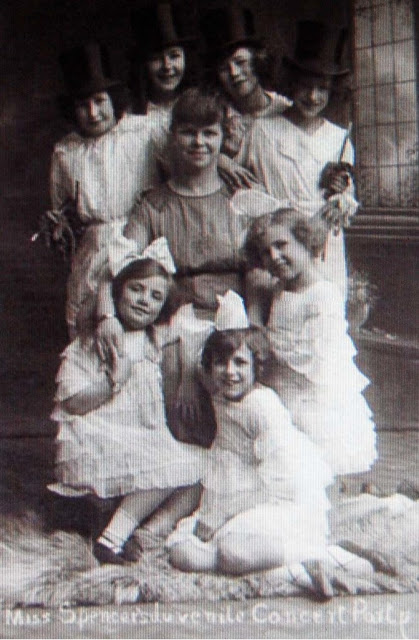 Gladys was born in 1897 in either Ilford or Romford (her parents gave different responses on the census returns for 1901 and 1911). By the time of the 1901 census she was living with her father Henry (who gave his profession as printer compositor) and her mother Louisa in Douglas Road, Hornchurch;. By 1911 the family had moved to 172 Sixth Avenue, Manor Park and Gladys had two younger brothers Herbert and Henry. Henry senior had advanced in his career to the point of being a paper bag manufacturer but he later switched jobs and became a market gardener and ‘experimental plant breeder’ out in Billericay. By the time of her death Gladys had only moved a few dozen yards down Sixth Avenue, from 173 to 122.  In the 1920’s unmarried Gladys was working at the Classical Academy of Music and Dancing in Rixen Road as a dance teacher but also making money with her dance troupe Spencer’s Celebrated Dancers. Perhaps some of her dancer’s were sourced from amongst her pupils but she also advertised extensively in The Stage, the newspaper for professional entertainers of every stripe and hue. These classified adverts give some clues about the professional fortunes of Miss Spencer’s performers: “Spencers celebrated dancers - high kickers, splits or acrobats. This week East Ham Palace next week Putney Hippodrome,” runs a typical one. They also appeared at Great Yarmouth at the Regent Theatre in 1927, given equal billing with Alex McGill and Gwen Vaughan ‘the cheerful chatterers with a piano, in original comedy duets.’ These were more innocent times; in our more cynical age it is hard not to feel there is something slightly disreputable about advertising for girls who can do high kicks, cartwheels and splits or in a 1931 advert, “wanted Pretty Juveniles also Bigger Girls for Rev and Panto Immed. Vacs. Gladys Spencer, Rixen Road, Manor Park, nearest station East Ham”. A single surviving photo from the 20’s shows Gladys surrounded by her concert party pretty juveniles in white frills and lace with an outsized ribbon in their hair and her Bigger Girls in top hats.

Gladys died of pneumonia on Easter Monday, 6 April 1931. Her death may not have been entirely unexpected – she certainly left a will and very few unmarried people of 34 would bother going to the trouble of making a last will and testament unless they were seriously ill. Despite her relatively young age she managed to leave an estate valued at £1459 and 15 shillings; quite an impressive small fortune for the early 1930’s. Those high kicks and cartwheels clearly made money. Her executor was one Walter Ambrose Woodrow, a chemist who was just four years older than Gladys. Were they just good friends? Was Walter the one who christened her Gladeyes? 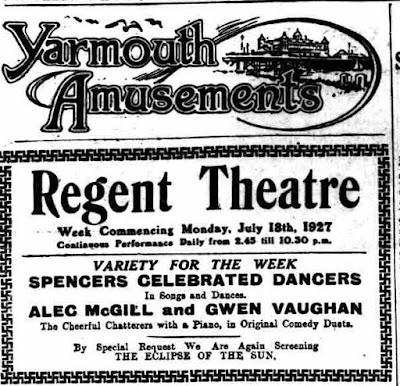 Walter was born in 1893 St Marylebone/Regents Park, was living in Bromley with his parents in 1901 and had moved to 47 North Street in Plaistow by the time of the 1911 census where he gave his occupation as ‘chemist working in oil manufactory’. He was living as a lodger in the house of 69 year old widow Venus Gidley (now there is an evocative name). Venus had two daughters, both older than the 18 year old Walter. 21 year old Ethel May Gidley worked as a tobacco moulder; the older, more worldly young woman whose mother was Venus seems to have won Walter’s heart. The pair were married in 1914 and moved to their own house at 8 Berkeley Road in Manor Park. Walter became the Head of the laboratory of the Anglo American Oil Company (later known as Esso) but doesn’t seem to have been able to hang on to his marriage. Ethel not only left Walter, she moved to the USA. The couple were never divorced and Walter never remarried. Did he become close to Gladys after the separation from his wife? If so her death must have been a terrible blow. He died in 1957 in Polegate, Surrey leaving an estate of £1347 11s 1d; 46 years in the oil business and he seems to have made much less than Gladys did in a much shorter time out of teaching piano and supplying celebrated dancers to the theatres of London and the South East. 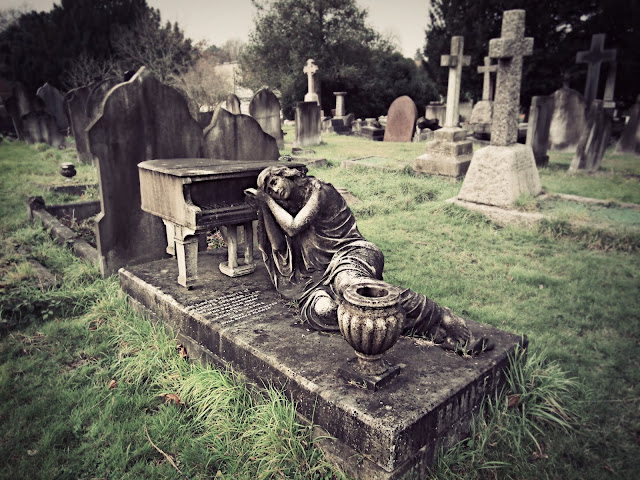