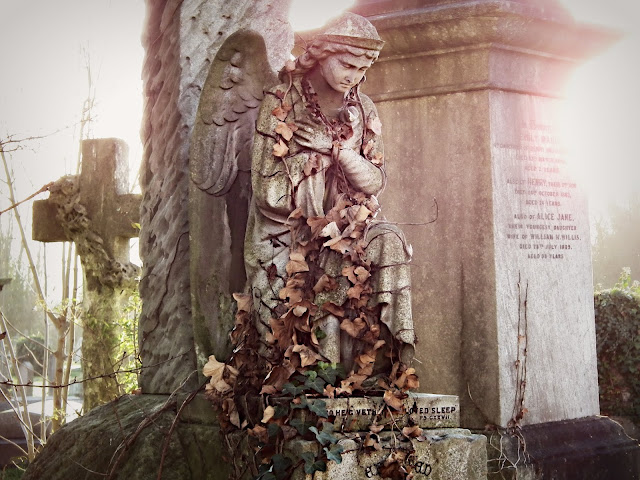 Unlike Ebenezer my employer allows us to put down our quills, stopper the ink wells, switch off our laptops and knock off work early on Christmas Eve. Instead of heading back home into the bosom of my family I normally, if the weather is halfway decent, head off to a cemetery instead. It’s a traditional thing to do at Christmas after all, ask Dickens; Ebenezer visited one with the ghost of Christmas Yet to Come and found the experience transformative. When I worked in Vauxhall Brompton Cemetery was my preferred spot but now I work in Kings Cross Kensal Green is just a few stops away via the Metropolitan and Bakerloo lines. You can’t loiter for hours on a December afternoon just a few days after the winter solstice, the sun sets at just before 4.00 and the cemeteries close their gates at 4.30.


The cemetery was busier than I had ever seen it before on a weekday.  Christmas is the closest we get to having a day of the dead in the UK.  Many people feel the urge to visit departed relatives, even if they have ignored them all year.  Many cemeteries, including Kensal Green, even open on Christmas Day and Boxing Day, though generally only in the mornings. There was a steady stream of visitors, generally arriving by car, almost always clutching some floral tribute and never staying more than 10 or 15 minutes.  I noticed a middle aged man and a couple of young women lurking in the gloom behind John St John Long’s tomb on Central Avenue where Harold Pinter’s grave is to be found. Pinter died of cancer ten years previously to the day, 24 December 2008 and his visitors could have been relatives, friends or admirers. After standing in respectful silence for a few minutes they left, picking their way through the mud and puddles, in the direction of the exit. As the sun began to set the other visitors gradually melted away leaving me in the company of the crows.  I stood watching a half dozen of them bounding across the turf, pausing  from occasionally to cock their heads from side to side, minutely examining the ground first with one eye then the other, in the perpetual pursuit of something edible. When I left the crows a fox crossed the path in front of me, turning its head momentarily to glance in my direction before disappearing into a thicket of gravestones. In the Scotsman of December 1945 a reader recalled spotting a deer here in the closing months of the war, near to the Robert Owen monument. The cemetery authorities apparently knew about the deer and assumed it was a stray from a park; nowadays the nearest deer would be in Richmond Park which is quite a distance for a deer to stray. In the bare trees some increasingly loud squawking began to drown out the cawing of the crows and marked the presence of something far more exotic than a deer. With the sun halfway below the horizon the trees were already in shadow and it was hard to make out any details of the dozens of birds screeching in the leafless branches. But then another wave of them arrived, flying above the crown of the trees and high enough for their vermilion beaks and coral green plumage to catch the dying sunlight; ring necked parakeets. At dusk in autumn and winter these avian invaders from the Indian subcontinent gather in large flocks, known as ‘pandemoniums’, to roost together in noisy conviviality. These roosts can be up to a thousand birds strong but the one in the cemetery wasn’t as large as that. There were easily a couple of hundred though, arriving in waves 30 seconds to a minute apart, each new group of arrivals setting off more ear splitting screeching.  A breeding colony of Psittacula krameri were first reported in Surrey in the 1960’s and since then their range and density has spread to include almost the whole of London. The London population is supposedly increasing by 30% a year and they are so common now in fact that they are often referred to as ‘posh pigeons’. They love cemeteries; I’ve spotted them in Lewisham, Abney Park in Hackney, and the City of London Cemetery in Ilford as well as Kensal Green. But I’d never seen quite so many together in one place or been subjected to so many of them making their raucous racket at the same time.