Below is a post I originally wrote almost five years ago when construction work on the HS2 high speed rail link was just starting. This morning I opened my copy of the Times (the online version of course, I can’t remember the last time I handled a real newspaper) to see the headline HS2 takes bones of explorer Matthew Flinders on an adventure and read that the team from MOLA (Museum of London Archaeology) working on what was the old burial ground of St James, Hampstead Road had, against all the odds, actually succeeding in locating the mortal remains of Captain Matthew Flinders thanks to his funeral director having the foresight to secure an almost incorruptible lead coffin plate bearing his name to the lid of his coffin. The discovery was actually made on the 15th January but a news black out appears to have been maintained for the last nine days to ensure that its eventual release comes at a time when it will have maximum impact – the eve of Australia Day. Virtually every news outlet in the UK and Australia seems to have picked up on the story. At the time of my original post rumour had it that Flinders was probably buried beneath Platform 15 of Euston Station but unfortunately this turns out not to have been the case. The human remains gathered by the archaeologists from the 40,000 burials at St James will all be reinterred in consecrated ground; whether any special provision is made for Captain Flinders has not yet been made clear. Perhaps he will end up in Westminster Abbey?


Ernest Scott in his 1914 ‘Life of Captain Matthew Flinders R.N.’ (from which I took almost all the details below of Flinders’ death) mentions that “Flinders died at 14 London Street, Fitzroy Square, and was buried in the graveyard of St. James's, Hampstead Road, which was a burial ground for St. James's, Piccadilly. No man now knows exactly where his bones were laid. (The vicar of St. James's, Piccadilly, who examined the burial register in response to an enquiry by Mr. George Gordon McCrae, of Melbourne, in 1912, states that the entry was made, by a clerical error, in the name of Captain Matthew Flanders, aged 40.)”. The burial register for St James is now on line courtesy of the London Metropolitan Archive and as you can see below the vicar was quite correct, Flinders surname is recorded as Flanders.

According to the Australian press today (28.02.14) Network Rail management have been engaged in “high level talks” to discuss what they will do in the event that construction work at Euston on the the HS2 high speed rail link accidentally exhumes anyone originally interred in St James burial ground.  They are especially worried if the exhumation is of Captain Matthew Flinders of the Royal Navy who was buried there in 1814. The possibility of some JCB accidentally digging up the explorers bones comes on the 200 anniversary of his death and at a time when a statue of him will be erected on the mezzanine floor of the new station concourse.


Flinders is not well known in England. In Australia he is a national hero with almost a hundred memorials to commemorate him and his achievements. In the UK there is just one memorial to him, a relatively recent statue erected in his home town of Donington in Lincolnshire. As a boy he read ‘Robinson Crusoe’ and conceived a desire to run away to sea which he put into practice by joining the Royal Navy at the age of 15. He served under Captain Bligh on the second Breadfruit expedition (the one after the Bounty). He made several voyages to Australia and the quality of his surveys brought him to the attention to the gentlemen of the Royal Society, particularly Sir Joseph Banks. In 1801 Flinders was given command of HMS Investigator. Over the next two years he circumnavigated Australia exploring and surveying almost the entire coastline. By the time the expedition was over and Flinders had returned to Sydney on June 9 1803, his ship was a virtual wreck and was judged to be unseaworthy and condemned.  He tried to return home on HMS Porpoise but the ship was wrecked on the Great Barrier Reef and he had to return to Sydney in the ships cutter. His next attempt to get home in a 29 ton schooner the Cumberland was even more disastrous. The boat was in such poor condition that he had to stop in Mauritius for repairs. The island was controlled by the French who had been at war with the British since May. The Governor of the island immediately arrested Flinders and requested instructions from France about what to do with the British captain.  He was not released until 1810, spending 6 and a half years on Mauritius.


When he finally returned to England he was in poor health. He spent the next few years writing an account of  his last expedition “A Voyage to Terra Australis.” The proofs of his book were brought to him on his deathbed but he was already unconscious and never saw them. He died at home, 14 London Street, Fitzroy Square on the 19th July 1814 at the age of 40. His wife was at his bedside and his two year old daughter and a family friend in the next room. His wife had laid the proofs of his book on the bed so that he could touch them and shortly before he died he started back into consciousness for a few seconds and called out hoarsely for “my papers” before falling back into his pillow and dying. A friend who wrote an account of his death has different last words, supposedly muttered to a doctor who was attending him; “but it grows late boys, let us dismiss…” He was buried in the burial ground of St James, Hampstead Road, a chapel of ease for St James, Piccadilly. The site of grave quickly became lost, even to the family. His daughter later wrote that her Aunt Tyler had gone looking for “his grave, but found the churchyard remodelled, and quantities of tombstones and graves with their contents had been carted away as rubbish, among them that of my unfortunate father, thus pursued by disaster after death as in life.” What caused such chaos in the churchyard is not known. Further burials were forbidden by the Metropolitan Interment Act of 1853 and the burial ground was closed. In 1883 an acre of the churchyard was sold to the London and North Western Railway for £8000 for the Euston Station extension. The rest was initially lad out as gardens and then later turned into a car park for the nearby Temperance Hospital. The 1791 burial chapel eventually became a parish church in it’s own right but by 1954 the number of parishioners had fallen to an extent that forced the church authorities to unite the parish with that of St Pancras. The church was closed and demolished in 1964. 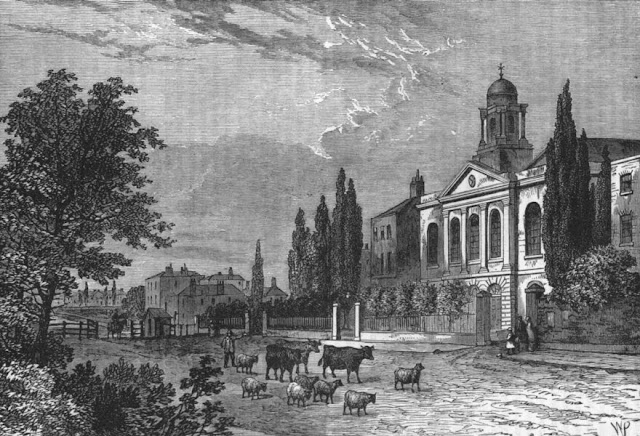 St James and the tollgate, Hampstead Road
Posted by David Bingham at 10:13