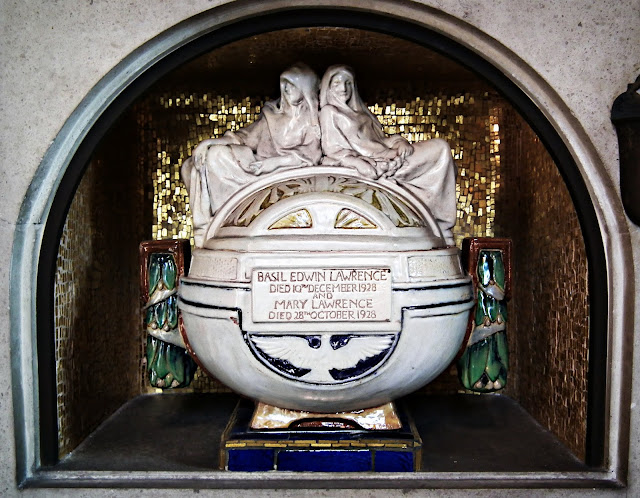 We don’t know where 32 year old barrister Basil Edwin Lawrence and his wife Mary were planning to go on the morning of 24 March 1886 but we do know that they must have left their house at 13 Woodchurch Road, NW6 at about 9.40am and walked down Priory Road towards Belsize Road or West End Lane towards Kilburn High Road. They were heading towards Kilburn & Maida Vale Station (now Kilburn High Road), a 10 minute walk away from their suburban villa and very convenient for getting Basil to his chambers on Chancery Lane. At almost exactly the same time 25 year old Julia Marks, who lived at 18 Birchington Road, just 3 or 4 minutes walk away from the station was also leaving her house to catch a train, though she had no intention of travelling anywhere.
Julia Marks had passed the morning uneventfully, having breakfast with her husband Charles at home, chatting about her plans for the day (she told that she was going to Willesden to see about the character of some servants she was thinking of employing), arranging to meet later at her mothers and seeing him off to his office at 8.30. Half an hour later she asked her housemaid Maggie Robinson to help her put up a curtain hook in the drawing room. At 9.30 she was giving her new cook,  Ellen Steinhans, instructions on what to prepare for her and the children’s lunches and what to do for the rest of the day. Neither her husband nor her domestics noticed anything out of the ordinary in her demeanour or had any inkling of what she was about to do.
After putting on her coat and hat Julia Marks walked to Kilburn Station and onto the platform. She did not buy a ticket. She wanted to catch a train, the 9.57 from Broad Street, but wasn’t going to travel. Frederick Carter, a porter at the station, noticed her as he crossed the line to meet the incoming train from Broad Street. She walked down the slope at the end of the platform, just where it passes under the Priory Road Bridge, and knelt down by the side of the tracks. Basil and Mary Lawrence had also arrived at the station by this time and were standing on the opposite platform, waiting to catch a train into London. Frederick Carter couldn’t quite believe what he was seeing, he thought Julia might have stumbled. Basil Lawrence on the other hand was very clear about what Julia was doing. He saw her kneel by the tracks and gently place her head, as though she were laying it on a pillow, on the cold steel rail of the track. Hoping Mary hadn’t noticed he shooed her into the waiting room, deliberately putting himself into his wife’s line of vision, so that she couldn’t see what was about to happen. He could not bring himself to turn around as he listened with horror to the sound of the incoming locomotive pulling into the station. The train driver, an ashen faced John Colver, climbed down from the engine and told Frederick Carter the porter that he had run over a woman. Carter fetched the station master who had been watching it all from further along the platform. He said that the engine guard had caught the woman’s head and dragged her body along, under the platform. When the station staff finally managed to pull her out she was still alive but she died shortly thereafter. Her head and face did not seem badly injured but her right arm and hand had been crushed by the train wheel.  The police and medical aid were both summoned and both arrived at the same time, in the shape of Inspector Edward Ettridge of the S division of the Metropolitan Police and Dr Muller of Oxford Road. They supervised the transfer of the body to the ticket office and whilst Dr Muller examined the body Inspector Ettridge looked through her black leather purse and found some form of identity. Before lunchtime her husband had been called from his office by the police and told that his wife was dead. 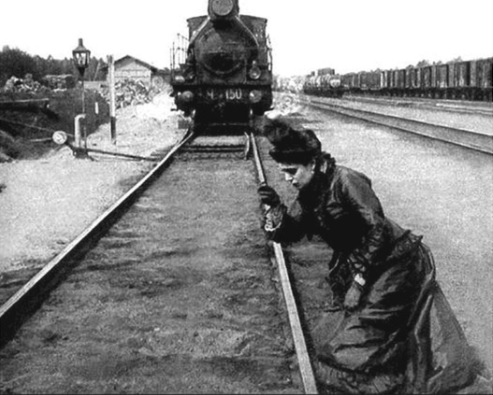 An inquest was held on the following Friday, at the Priory Tavern, not much more than a hundred yards away from the site of the accident. The coroner was Danford Thomas, who later chaired the inquests into the murders of William Whiteley and Dora Crippen.  Charles Simeon Marks, “who was sworn on the Old Testament and with his bead covered” said the Kilburn Times, was the first witness. He told the inquest about breakfasting with his wife for the last time two days before and insisted “ he had no reason to think that she had placed herself in a position of danger, and had never heard that she had expressed herself as being likely to do away with herself.” No one it seemed had the least notion as to way Julia Marks had killed herself or chosen to do away with herself in the manner of Anna Karenina. The book certainly had no influence, unless Julia read Russian; the book had been published in 1878 but the first English translation didn’t appear until 1889. Her doctor, Dr P Kirkpatrick Picard of Abbey Road, told the coroner that Julia Marks had been his patient for four years. He had been asked to make a home call to see her in mid February but had found nothing wrong with her other than her being anaemic and slightly forgetful. He insisted that there was no sign of melancholia when she saw her, just the opposite in fact, she took a bright view of things. Under questioning from the coroner he conceded that anaemics “there was an altered condition of the blood, which often affected the brain, and might produce a confusion of mind in which the patient might momentarily do something without knowing at all what she was about.” He further speculated that “it was possible, in her condition, that she might have become fascinated by the approaching train...”  The verdict of the inquest jury was “hat deceased did die from the mortal effect of injuries received by being run over by a passing train at Kilburn Station, and that the said death was occasioned by deceased placing herself in front of the said train, at the time being of unsound mind and suffering from anaemia.”
We don’t know what effect witnessing the death of Julia marks had on Basil Edwin Lawrence. We know that it didn’t put him off the railways. In later life he followed his father into the position of director on the Nottingham and Grantham Railway and Canal Company. He is best known today for writing a “History of the Laws affecting the Property of Married Women in England”, an essay which won the Yorke Prize when he was at Cambridge and which was published in an expanded version in 1884. He was born at 46 Chalcot Villas in Hampstead in 1853. His father was Edwin Henry Lawrence, the great nephew of the Regency portrait painter Sir Thomas Lawrence, a successful stockbroker and collector and patron of the arts. Basil studied at Trinity College Cambridge, married Mary Lyndon at St Paul’s church in Hampstead in 1873 and became a practicing barrister, specialising in what is probably the most mundane branch of the legal profession, conveyancing. Mary and Basil had three children, Dorothy, Arthur and Bryan. He died at Cookham, Berkshire in December 1929, just two months after Mary, who had died in October. He left an estate valued at £64.882 and amongst his bequests were £5 for each year of service to John Chastell his chauffeur and John Pleasants his gardener and £3 for each year of service to Lily Fletcher, parlour maid  and Frederick White, gardener. Basil and Mary were both cremated at Golders Green and the rather beautiful urn which holds both their ashes stands in a niche in the columbarium. 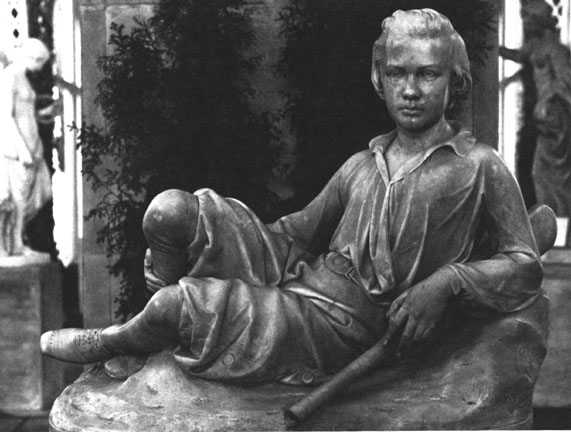 The City of London School stands by the side of the Thames, close to St Pauls and next to the Unilever building. In the entrance hall is a statue of a boy cricketer by Joseph Durham called ‘Waiting for his innings.’ In the will of Edwin Henry Lawrence, Basil’s father, is a paragraph which reads “I bequeath to the National Gallery the Marble Statue by Joseph Durham A.R.A. of a Cricketer "waiting for his inning" being a life sized Statue done by him of my son Basil Edwin Lawrence and I request that this inscription may be incised on the edge or rim of the Statue "Basil Edwin Lawrence Trinity College, Cambridge M.A. L.L.D. presented by his Father Edwin H. Lawrence F.S.A." and I request that my son will obtain and add a plain Granite or Marble Stand for the said Statue."  For reasons unknown the statue of Basil as a 12 year old never made it to the National Gallery but was granted  a home by the City of London School.
Posted by David Bingham at 09:18