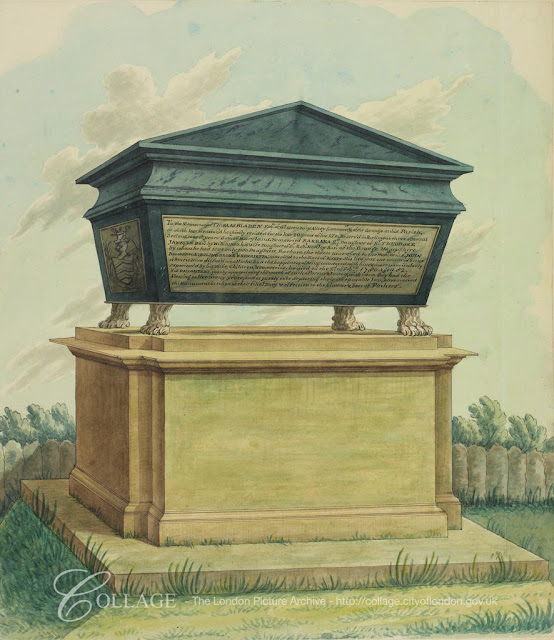 According to David Ian Chapman’s “The Grange” published by the Leyton and Leytonstone Historical Society, Sir Thomas Bladen’s tomb stood just off the main path in the churchyard of St Mary’s, Leyton, just behind the alms houses.  This substantial tomb with a black stone sarcophagus, possibly basalt or granite, resting on four lions paws (coade stone?) and mounted on a pedestal, has completely disappeared. Not a trace of it remains. When it disappeared, no one knows. It was certainly still around in 1894 when the Reverend John Kennedy wrote his ‘History of the Parish of Leyton’ and mentioned it and luckily around 1820 someone pained a water colour of it which is now in the Wakefield Collection at the London Metropolitan Archive.
Sir Thomas Bladen was born in Annapolis, Maryland, on the 23rd February 1698, the son of William Bladen, originally from Yorkshire who had settled in the new world in 1690. William became fabulously wealthy and sent his eldest son back to England to be educated in 1712. When William died in 1718 Thomas inherited 16,000 acres of land and 26 slaves, which he immediately sold off. He probably engaged in trade (his uncle was a director of the Royal African Company) and in 1727 he became a member of parliament for Steyning. He married Barbara Janssen at St Stephen Walbrook in the City of London in 1731 and was by then wealthy enough to buy the Glastonbury Abbey estate from the Duke of Devonshire for a cool £12,700. In 1743 he returned to Maryland as the Governor of the province, appointed by Lord Baltimore (who just happened to be his brother in law). His governorship lasted just four years because the colonists found him “tactless and quarrelsome”. He is best remembered for introducing ice cream (in particular strawberry ice cream) to the colony, serving it at state functions, and for Bladen’s Folly, a palatial governor’s residence which was started in 1744 with a grant of £4000. When Sir Thomas ran out of money to complete the project he returned to the Maryland Assembly to request additional funds. They took great pleasure in refusing the request and censuring him for his extravagance. The almost completed mansion stood empty for the next 50 years, becoming derelict and only being saved when it was gifted to the newly founded college of St John’s who restored and extended the building which today stands as the centrepiece of their Annapolis campus.


Sir Thomas returned to England in 1747 and from the mid 1750’s lived at his Leyton mansion, the Grange, dying quietly in 1780 and being buried in the churchyard of St Mary’s.
Posted by David Bingham at 10:30