'The Worm at the Core; On the Role of Death in Life' Sheldon Solomon, Jeff Greenberg & Tom Pyszczynski (Penguin £9.99) 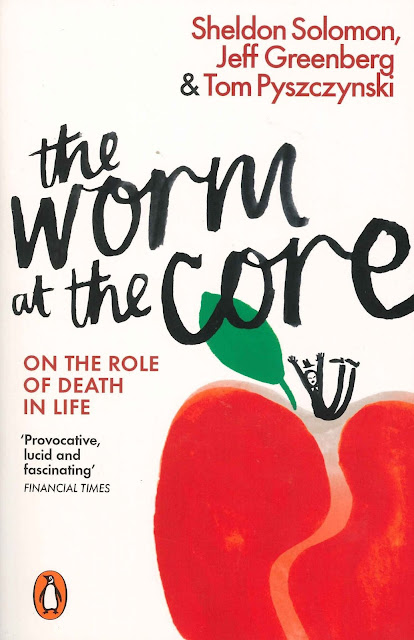 And yesterday I saw you kissing tiny flowers,
But all that lives is born to die
And so I say to you that nothing really matters,
And all you do is stand and cry
Led Zeppelin ‘That’s the way’

‘Live every day as though it will be your last,’ always struck me as an absurd piece of advice. If today was your last day of life would you bother going to work? Pay the mortgage or the gas bill? Clean the house? Feed the kids? Change your underpants? Or would you spend the day getting drunk, having sex, revenging yourself on your enemies (without fear of the consequences) or blubbing inconsolably about your imminent demise? All that 'live for the moment' stuff is just nonsense - if we took it seriously we would find ourselves jobless, divorced and broke in a matter of days. If everybody lived for the moment civilisation would fall down around our ears within a week.  The only way we, humanity, can bring stability and predictability to our world is by contriving to ignore the fact that we are going to die and carrying on as though we are going to live, if not for ever, then at least for a century or two.  American psychologists Jeff Greenberg, Sheldon Solomon, and Tom Pyszczynski are fascinated by the human ability to stare death in the face and simply not see it, though they seem, on the whole, to think that our capacity to ignore our inevitable demise is rather a bad thing and something we should strive to get over.

The three psychologists shared a common passion for Ernest Becker the American social anthropologist who, when dying of colon cancer, had observed that most other people seemed blithely unaware that one day their precarious existence would be snuffed out by death. He theorised that society, civilisation, is an elaborate defence mechanism to shield us from the devastating knowledge that we are mortal. Only by pretending that we live forever are we able to get up in the morning and face the day. Becker’s views were not so different the Greek philosopher Epicurus who had come to similar conclusions two thousand years ago, so there is nothing new in these ideas. Greenberg, Solomon and Pyszczynski have spent their careers building on the notions of Epicurus and Becker and have come up with a scientifically testable hypothesis they call ‘Terror Management Theory’ which states the basic psychological conflict between our instinct for self preservation and our knowledge of the inevitability of death results in a state of terror which is then managed by embracing cultural values that provide life with enduring meaning and value.  The sudden revelation that ‘all that lives is born to die’ threatened our burgeoning consciousness and even the survival of the species:
The awareness of death arose as a byproduct of early humans' burgeoning self-awareness, and it would have undermined consciousness as a viable form of mental organization—hurling our terrified and demoralized ancestors into the psychological abyss and onto the evolutionary scrap heap of extinct lifeforms— in the absence of simultaneous adaptations to transcend death. But our ancestors ingeniously conspired to “Just Say No” to reality by creating a supernatural universe that afforded a sense of control over life and death, enabling them to bound over the “yawning chasm” and cross the cognitive Rubicon that triggered humankind’s evolutionary explosion.

Having posited an awareness of death as an early feature of developing human consciousness the authors discuss how social and cultural norms protect us from the full implications of that knowledge. They cite research which shows that judges were prompted to set a bail figure nine times higher for an alleged prostitute after being made to think about their own deaths.  Even subtle reminders about death make us more likely to be patriotic – in one study Germans interviewed in front of a shop showed no particular preference for things German, but those interviewed in front of a cemetery preferred German food, German cars, and even German holidays to foreign alternatives. As well as making us more judgemental towards those who do not share our values and more patriotic the authors argue that “over the course of human history, the terror of death has guided the development of art, religion, language, economics and science. It raised the pyramids in Egypt and razed the Twin Towers in New York.”

This is an interesting and readable book. I don’t have any argument with the contention that our mortality underpins every aspect of our existence or dispute that humans are very good at ignoring the prospect of their own demise. It also seems self evident that the fear of death plays a significant part in religion and that art, at least for the artist, represents an opportunity for a type of ersatz immortality if their work proves popular enough. All this seems self evident and not particularly contentious. The authors go much further than this though and see the repressed fear of death as being the driving force behind much of our psychology and our social and cultural life. Death looms as large in their view of human motivation as sex does to orthodox Freudians, and for the same reasons is, in the final analysis, not completely convincing.