The Man who would be Cheops Part One; Thomas Willson and the Pyramid of Death

One of the consequences of Napoleon’s invasion of the Ottoman Empire in 1798 was a wave of Egyptomania sweeping across Europe during the first two decades of the 19th century. Alongside his 40,000 troops Bonaparte took 167 savants with him to the land of the Pharaohs; engineers and artists, geologists, chemists, and mathematicians as well as philologists and antiquarians, who collectively formed the Institut d'Égypte, dedicated to studying the cradle of civilisation, Ancient Egypt.  Back in France, from 1809 until 1829, the Institut painstakingly produced and published under Napoleon’s patronage the nine folios of text and ten volumes of plates of the monumental ‘Description de l'Égypte’, fuelling the craze for all things Egyptian. In architecture the Egyptian revival look poised, for a while at least, to challenge the hegemony of neo-classicism. Gothic revival may have eventually became the prevailing taste of the Victorian age but the architecture of the Egyptian revival, with its fascination for mortuary culture, found its niche in the newly formed garden cemeteries of England’s major cities.  ﻿


Some of the greatest monuments of the Egyptian revival never made it beyond the planning stage. In 1815 a veteran of the Napoleonic wars, Sir Frederick William Trench MP, proposed building a pyramid to commemorate victory over the French.  His suggestion was for a 380 foot tall, 22 step ziggurat (one step for each year of the war and taller than St Paul’s) to be sited at the top end of Pall Mall where Trafalgar Square now stands. Sir Frederick’s pyramid scheme would, he calculated, provide employment for demobilised British troops for at least 10 years at a cost of just £1 million to the British taxpayer. No one took the proposal for a giant pyramid seriously and Sir Frederick eventually gave up on the idea, instead throwing his time and energy into pursuing a scheme to build a giant quay along the north bank of the Thames. But something about Pyramids appealed to the Zeitgeist and in the architect Thomas Willson’s proposal for the metropolitan sepulchre on Primrose Hill, a gigantic pyramid to be built to store up to five million corpses, it also happened to dovetail with the heated contemporary debate about what to do about London’s overcrowded and noxious churchyards. The 1828 edition of The London Literary Gazette and Journal of Belles Lettres, Arts, & Sciences dubbed Willson’s proposal the ‘pyramid of death’:


Another remarkable design is “the project of a pyramidal metropolitan sepulchre By Thomas Willson Architect. The edifice is to consist of brick work to be faced with square blocks of granite. The base of it would, according to the project, occupy an area of 40 acres (about as large as Russell Square) the length of the ground line being 1200 feet. The height of it is intended to be 1500 feet, (nearly four times the height of St Paul's). The projector has published a prospectus of the work, which will be found annexed to the painting exhibited in the gallery”. This monstrous piece of folly, the object of which is to have generations rotting in one vast pyramid of Death, instead of being quietly mingled with their parent earth and forgotten, is perhaps the most ridiculous of the schemes broached in our scheming age. The desire to accomplish that which every wise and philosophical mind must wish not to have accomplished is indeed worthy of a professor of that art or science Architecture, which is at so low an ebb in this country, as to stand at the bottom of the whole list.
Willson’s proposal required no public funding; it was in fact ‘practical, economical and remunerative’ and would, he believed cost, £2,583,552 to build but make a profit of £10,764,800 once the sepulchre was completely filled (which he estimated would take about 125 years, at a rate of 40,000 interments a year). Freehold vaults, “which are to closed up and sealed for ever when interment lakes place, with stone tablets on the face, explanatory of name, place, age, &c.”, were to cost between £100 and £500, depending on the size and location, and there would be a steady income stream from vaults leased to the various parishes of London. The gigantic structure would hold 215,219 vaults on 94 stories, accessed by sloping ramps and hydraulic powered lifts and would cover 18 acres of Primrose Hill but hold as many bodies as a 1000 acre cemetery.   His clever design would, Willson wrote “go far towards completing the glory of London.” It isn’t clear if the 1500 foot height of the Metropolitan Sepulchre included the 200 feet elevation of Primrose Hill or not. Either way the brooding bulk of the Sepulchre, at almost 460 metres tall, would have dominated the London skyline; the obelisk at the summit of the pyramid would have been at twice the height of Canary Wharf and 250 metres higher than the Shard. Being almost as wide at the base at it was tall it would have hung over the capital like a manmade mountain, blocking out sunlight for long periods of the day to huge swathes of north London. One of the main concerns about the scheme was that the weight of the millions of tons of bricks and granite used would crush Primrose Hill. 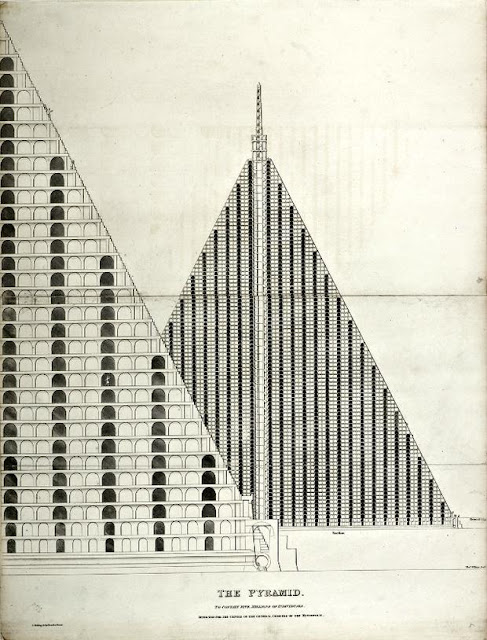 Willson first proposed his scheme in 1824 when it caught the attention of barrister George Frederick Carden, the garden cemetery pioneer, who was beginning to take an interest in burial reform.  Carden was intrigued but not convinced and Willson was enrolled into the burgeoning burial reform movement.  He became one of the early members of Carden’s General Cemetery Company and attended the historic meetings held in the Freemason’s Tavern in June and July 1830, chaired by Andrew Spottiswoode MP. After Carden had opened the meeting by outlining his vision for a London garden cemetery along the lines of Père Lachaise, open to all denominations and all religions, Willson was the first person to respond. According to the Oxford Journal of 10 July 1830, “Mr. Wilson (sic) coincided generally in the sentiments expressed by the last speaker, but he did not think the plan of Pere-la-Chaise suitable for a general cemetery in this country. He had a plan by which he should be able to make 50 or 100 acres of land as available for the purpose of burial as 1,000 could be by any other method.”

Perhaps spurred on by the momentum around the General Cemetery Company Willson published his plans in 1830 under the title “The Pyramid, a general metropolitan cemetery to be erected in the vicinity of Primrose Hill” including drawings of his proposed designs.  The publication attracted the attention of another notable figure in the burgeoning cemetery movement, John Claudius Loudon, whose correspondence with the Editor of the Morning Advertiser was published in the newspaper on 19 January 1830. As with other members of the cemetery movement, Loudon applauded Willson’s desire to abolish burials in churchyards but objected to the pyramid proposal “first, because I think the risk of mephitic exhalations would be greatly increased; secondly, because the expenses of burial of the poor would be greatly increased by such agglomeration of corruption; and, thirdly, and in this perhaps I am peculiar, because I hate the idea of interment in a vault, or in any way which prevents the body from speedily returning to its primitive elements, and becoming useful by entering into new combinations—vegetable, mineral, or even animal, in aquatic burial.” He also had an geometrical objection to the proposed form of the metropolitan sepulchre; “a pyramid recalls to me an age of darkness and superstition; and not being guilty of what Mr. Bentham calls, ancestor worship, and thinking that in this country there is by far too great a veneration for antiquity in things mental as well material, I prefer looking forward.” After encouraging Willson to “push his scheme as far it will go, by which, at least, public attention will be called to the subject,” he went on to make an alternative proposal, a garden cemetery, to be built on 500 acres of the cheapest land available within a 50 mile radius of London, somewhere like Bagshot Heath he suggests. That the dead be conveyed there by public hearse which “ought to leave London every other day, at a certain hour” though “a rail-road and steam loco-motive engine might in time be employed in this business, for poorer classes —and the rich, or those who ride when alive in private carriages, might bury by private hearses.” This sounds remarkably prescient of Brookwood Cemetery, which is a mere 6 or 7 miles from Bagshot Heath.

Willson assiduously followed Loudon’s suggestion to ‘push his scheme as far as it would go’ as we will see later, but despite 30 years of unstinting effort on his part and the lure of the potential millions to be made in burial fees no one really took the Metropolitan Sepulchre proposal seriously. In time memory of the scheme survived only as a paragraph in scholarly histories of the burial reform movement and as footnotes in accounts of the architecture of the English Egyptian Revival. But in the last six or seven years interest in the ‘pyramid of death’ has revived and dozens of websites have given posting space to an account based very heavily on the London Literary Gazette article of 1828 and it frequently features in lists such as ‘The landmark buildings that never were’ (BBC News 24 Jul 2012) and ‘The TopTen: Unrealised and unfinished buildings’ (The Independent 09 May 2015). The graphic artist Laura Haines completed her project ‘Metropolitan Sepulchre: ACounterfactual History of London’ in 2016, imagining what Willson’s pyramid would be like today if it had actually been built; the answer, of course, is that it would be a tourist attraction.
In 2012 Radio 4 broadcast ‘A Pyramid For Primrose Hill’, Jonathan Glancey’s look at the Metropolitan sepulchre, the Egyptian Revival and the cemetery movement (still available on BBC iplayer). One of Glancey’s  interviewees was Ralph Hyde former librarian of the Guildhall Library. As they leaf through a copy of Willson’s plans Glancey asks do we know much about Thomas Willson? “Not very much,” says Hyde, “he was born about 1780, and he went to the Royal Academy schools, and he was given some prizes, so he started off as a serious architect by the sound of it. He did various schemes for national monuments, victory monuments, but none of them seem to have been built. But in the 1820's he came up with this idea for a pyramid for London….” And there, in less than a hundred words, we have the sum total of virtually all the biographical data available on Willson. No one seemed to know anything about him; his pyramid may be one of London’s favourite unbuilt buildings but the man himself was a total mystery. I could not believe that anyone in the public eye for an outré proposition like the Metropolitan Sepulchre could really leave no trace in the records. There had to be something, somewhere. And so I started to work through birth, death and marriage records, census returns, newspaper archives and even the records of the Cape Colony in South Africa and eventually started to piece together a biographical outline of the man who would be Cheops.

See also posts on Willson's adventures in South Africa in Part Two and his later years in Part Three
Posted by David Bingham at 01:37