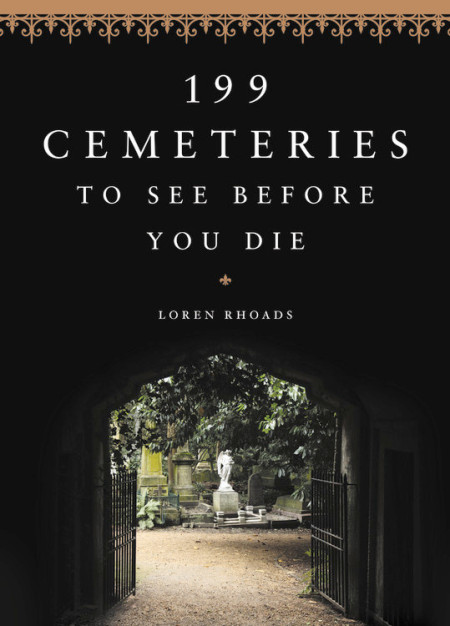 A bucket list of cemeteries? It doesn’t sound like a potential bestseller but Hachette imprint Black Dog Books has lavished enormous care on the production of ‘199 Cemeteries To See Before You Die’ launching it at the start of the Christmas market publishing season, apparently confident that they have a sure fire stocking filler on their hands.  The title is great but why 199? There must be an arcane art to choosing the number of items to include on lists of this sort. No one is actually going to do, visit, read, see (or whatever) everything on a bucket list so overinclusion seems to be an accepted part of the process. 1001 is apparently a customary number for rock albums and Arabian nights. 100 seems to be appropriate for  anything expensive (like visiting exotic places) so 200 sounds about right for cemeteries which amongst all their other multifarious merits are pretty cheap places to visit, with no entrance fee (generally speaking,  though there are some dishonourable exceptions, Highgate) gift shops, or overpriced on site catering.

Loren Rhoads was the publishers inspired choice to write the book and is probably uniquely qualified for the job. Loren is a San Francisco based writer and taphophile who acquired her graveyard fixation during an enforced stopover in London with her husband in 1991. Browsing in WH Smith’s in Victoria Station she came across a copy of Highgate Cemetery; Victorian Valhalla featuring John Gay’s celebrated photos of the cemetery. On the last day of the unexpected break they abandoned plans to visit the Tower of London and set off for Highgate instead and so, as she later wrote “on a bitterly cold January day during the first Gulf War, Highgate Cemetery was where our cemetery adventures began. Since then, we’ve visited graveyards from San Francisco to Singapore, Prague to Paris, and all across the USA.” Loren’s impressive list of publications include ‘Death’s Garden: Relationships with Cemeteries’ and ‘Wish You Were Here: Adventures in Cemetery Travel’, she is a regular contributor to a variety of magazines and for a decade edited the cult magazine Morbid Curiosity which dedicated itself to true first person accounts by ordinary Americans of life’s edgier moments. She currently edits the blog Cemetery Travel.

Before we go any further, in the interests of transparency, I need own up to having written a post on Loren’s blog about the cemitério do Alto de São João in Lisbon. This led to Loren including the said cemetery in 199 Cemeteries and a request from the publisher to use one of my photos of it in the book. It can be found on page 145, reproduced the size of a commemorative postage stamp (one of the few serious editorial mistakes by the team which assembled the book, I can’t help feeling). For the publication rights to my picture I received $100 US (and yet to be paid if anyone from Black Dog is reading this) and a free copy of the book.  I also get mentioned on the Special Thanks page as someone who expanded Loren’s list of cemeteries to be included. Having said all this nothing which follows is remotely influenced by my very small and tangential involvement in the project.

This is a book aimed at the American market and so 100 of the 199 cemeteries featured are in the States or Canada and the rest of the world is represented mainly by places where Americans are likely to travel with Europe getting the lion’s share of the non US attention (62 of the remaining 99) and Africa and Australia barely getting a look in. Most of the burial places listed are cemeteries but there are a small number of churches and archaeological sites in the non US sections including Westminster Abbey, Sutton Hoo, the Pyramids and the Valley of the Kings, Petra and the beehive tomb in Mycenae. The cemetery movement in the US has almost as venerable a history as its European counterpart (Mount Auburn in Cambridge, Massachusetts opened a couple of years before Kensal Green and was an influence on the design of Abney Park) and there is a glorious variety to its burial places that is probably unrivalled anywhere else in the world. There are pioneer and cowboy graveyards in the western states, large Victorian garden cemeteries in the eastern, French inspired Saint Louis and Metrairie in New Orleans, Spanish colonial and Hollywood glamour in California, there is even, uniquely, an undersea cemetery at the Neptune Memorial Reef in Key Biscayne, Florida. The book features every cemetery you would expect it to, Highgate, Brookwood, Pere Lachaise, Poblenou, Recoleta, San Michele in Isola, the Jewish Cemetery in Prague, Staglieno, Mount Auburn, Forest Hills but also many that you will never have heard of – the Merry Cemetery in Romania anyone?

Loren’s book is full of fascinating insights into the places we create to house our dead. She doesn’t have much space to describe her chosen burial places but manages to produce lucid sketches in 200 or so words that evoke their history and ambience. At the very least she manages to whet the appetite to find out more which is probably the most you can hope to achieve in a whirlwind tour like this. 199 Cemeteries is a handsome volume, beautifully illustrated with at least one photo of each cemetery featured. It is well set out, easy to read, pleasing on the eye and like little Jack Horner’s pie, impossible to thumb through without pulling out a plum. If you know anyone with even a mild case of taphophilia 199 Cemeteries would make a great Christmas stocking filler.