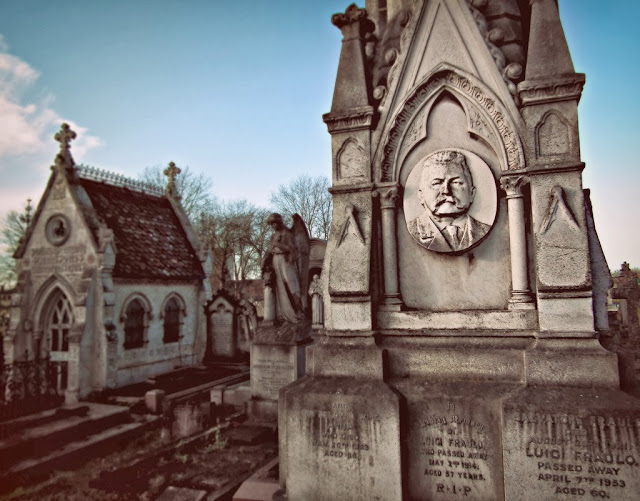 British imperial servants serving in the distant scattered territories of the empire must have been avid for even the most trivial scraps of gossip about life back in London. News that merited only cursory mention or at most a few lines in the British newspapers might find itself extensively reported in the Straits Times of Singapore or the Hawera & Normanby Star of New Zealand.  The death of Luigi Fraulo, honorifically either King of Clerkenwell’s Little Italy or the King of Ice Cream, depending on which newspaper you read, was an example of the sort of story which seemed to interest the consumers of news in the provinces or the colonies more than your genuine jaded Londoner.  The capital’s newspapers confined to a one line notice of his death and a brief paragraph on his interment, noting that the “funeral took place this afternoon of Luigi Fraulo, the Italian ice-cream king. The cortege passed along Oxford-street, and the hearse was entirely covered with flowers. Between forty and fifty carriages followed containing compatriots of the deceased.” The Straits Times on the other hand published what amounted to a full obituary.

According to the Straits Times Luigi was from Ravello in southern Italy and was 21 when he emigrated to London. He arrived in Clerkenwell with a single £10 note (the proceeds of selling his Italian wine business) and died at the age of 57 leaving an estate valued at over £15,000. His £10 note was used to hire himself a barrow and set himself up as an ice cream man. He was a good salesman and his carefully husbanded profits were enough to eventually allow him to launch a new business as a supplier of raw materials to the ice cream producers. Opportunities to expand were limited however by an expensive crucial ingredient – ice. In those pre-refrigeration days ice had to be imported from Scandinavia and the ice business was controlled by a cartel of ice merchants who kept supplies limited and prices high. Luigi had enough capital to risk chartering a ship and importing ice on his own account. Initially his customers were his compatriots in the gelato business but as he seriously undercut his competitor’s prices he soon found himself importing vast quantities of ice from Norway and supplying the hotel and club trade. He became wealthy and influential and, according to the Straits Times, something of a padrone to the London Italian community: “a good number of the tradesmen in ‘Little Italy’ owed their start in business to him. Every compatriot in trouble or difficulty appealed to him and never in vain. He was always ready with sound advice and practical aid. He acted as arbitrator in family and business disputes, he transacted the legal business of ‘Little Italy,’ he helped everyone, and the neighbourhood is nearly inconsolable in its loss.”

If the Straits Times is correct and he was 21 when he emigrated then he arrived in England around 1878. He appears in the 1881 census living at 28 Eyre Street Hill in the household of Panteleone Manzi, general merchant, along with his brother Salvatore. By the time of the 1891 census, when he was 33, he was head of household and recently married to Annie, who was 10 years younger than him, and they already had their first child Salvatore. Luigi’s mother Eugene was living with them along with Salvatore and a couple of cousins who helped out in the business. The family were living at 8 Eyre Street Hill, the Clerkenwell Street that is a continuation of Leather Lane on the far side of the Clerkenwell Road; Luigi was still living here when he died in 1914. Luigi went on to have 9 children; Salvatore, Alfonso, Luigi, Maria, Pantaleoni, Anna, Rosario, Margherita and Giuseppina. Luigi’s brother Salvatore seems to have been his constant companion, never married and always lived with him at Eyre Street Hill.

The image of Salvatore as a respectable father and family man is slightly tarnished when you look at the way he is reflected in the stories published in the London newspapers during his lifetime. In August 1887 the Islington Gazette, under the headline ‘ITALIANS IN DISPUTE’ reported that the 31 year old Luigi found himself in Clerkenwell County Court being sued for £8 8s by one Eugenie Borro of Fleet Row , Eyre Street Hill. Borro was an employee of Luigi’s who claimed he was owed the money as back pay. He claimed to have left his employment in Luigi’s business and gone to Paris but had come back at his boss’s request and under the inducement of an increase in his wages to £1 10s a week.  Luigi denied begging Borro to come back to his old job or offering him an increase in wages. He told Judge Eddis that in fact he taken him on again out of compassion and had been forced to sack him when he refused to do his work. The Judge awarded £4 to Borro, reflecting his old rate of pay, but deducting 12 shillings that Luigi had lent him. In  February 1892 Luigi found himself in the dock for a crime assured to outrage English sensibilities – maltreatment of a horse. The Islington Gazette once again:

A VETERINARIAN SEVERELY CENSURED. At the Guildhail Police Court, Baseliga Amonda, 31, Eyre Street Hill, Clerkenwell, carman, was charged with cruelly working horse while lame. —Luigi Fraulo, provision merchant, of the same address, was brought up for causing the horse to be so worked —Mr. Savournin, veterinary surgeon, stated that the sores on the animal were very bad, and had not been attended to. —Mr. J. Baxter, M.R.C.V.S., was called for the defence, and stated that the horse was fit to work in its present condition.—Alderman Renals: I know something about horses; but I never hear d such a statement from a veterinary surgeon. I shall fine you, Amonda, 40s for taking the horse out, and the owner £5 and costs, or a month, and if comes here again will assuredly go to prison. I wish to say that, as long as I sit on this bench, I hope I shall not hear such evidence as one veterinary surgeon has given. It is a disgrace to the profession.

In January 1894 21 year Giovanni Agabba appeared at the Old Bailey accused of feloniously wounding Brassi Lutschia with intent to do him grievous bodily harm. Luigi, who wasn’t even called as a witness, was mentioned frequently during the trial. Agabba was accused of slashing Lutschia across the arm with a razor during a quarrel involving up to 15 drunk people outside Mr Prole’s shop on Eyre Street Hill. Almost all of the Italian witnesses, and the defendant, had to have their evidence interpreted for the court.  Many of the witnesses said Lutschia was a ’bad character’  and seemed to sympathetic to the young razor wielding hooligan on trial. Lutschia, who was an ice cream vendor, had a hard time in the witness box despite being the injured party.  Although the questions he was responding to are not given in the official record of the trial it is quite clear from Lutschia’s answers what the defending barrister was trying to imply about his character and his relationship with Luigi: “I do not carry a knife or a razor—the razor which the prisoner used was not taken out of my pocket—I have never been accused of stabbing a man—I have got no money, and never paid any to settle out of Court three charges of stabbing—my friends have only paid money for me once when I was accused of stabbing, and I was charged innocently—I was bound over to keep the peace for six months—Fraulo, who was with me before it began, has not paid money to prevent my being prosecuted—he is at his house now—it is not true that the prisoner's brother and I were quarrelling and fighting with knives.” Sadly Luigi did not appear as a witness. Agabba was found guilty by the jury but with a recommendation for mercy to the judge. He was given three months hard labour.

Luigi was back in court in May 1901 but this time he was the plaintiff. The Islington Gazette, loudly proclaiming ITALIANS SEEK LITIGATION, reported that he was suing Thomas Falco, a boot maker of Clerkenwell Close, for £23 9s owed for rent and provisions supplied since 1891. Falco counterclaimed for £34 saying that Luigi owed him 30 shillings a week for 6 years for repairing horse harnesses. Falco called a large number of witnesses (all of whom required interpreters) to back his story. Luigi called one William Downs, a saddler and harness maker, (and who presumably did not require an interpreter to give his evidence) to testify that he had been carrying out harness repairs on behalf of the plaintiff since 1890. The judge was not impressed  by Falco’s witnesses and found for Luigi, ordering Falco to pay £1 a month until the dent was cleared.

Luigi’s final brush with the law came in February 1909 and was reported in the Evening Standard. Bedesta Toguolini boot and shoe maker of Mount Pleasant, Clerkenwell sued Luigi for £50 damages for alleged breach of covenant for quiet enjoyment of his rented premises. The paper explained that:

Mrs. Tuguolini and her husband were formerly tenants of a house in Mount  Pleasant, of which the defendant was the landlord. When the premises adjoining were let as a club they could never get any sleep Saturday and Sunday nights. Piano playing and dancing went on till six o’clock in the morning. Gambling was also carried on there and the witness spoke to other causes of complaint. Screams of ‘murder’ were sometimes to be heard, and on one occasion after a row the witness picked  up the razor produced.  Another witness said that on Sunday afternoons the people attending the club used to amuse themselves in the yard. It seemed to be an over flow meeting (laughter). The dancing was downstairs and the upstairs room was Monte Carlo. A police-sergeant’s evidence showed that there was a considerable amount of drunkenness amongst the girls frequenting the club as well as among the men.

Luigi denied that any ‘disgraceful behaviour’ went on at the club but the judge was having none of it. Neither was he having any nonsense about a £50 claim for damages – he awarded the plaintiff £15 from which he deducted Luigi’s £10 counter claim for rent arrears. The Tuguolini’s probably didn’t blow their £5 compensation down at the Italian social club. 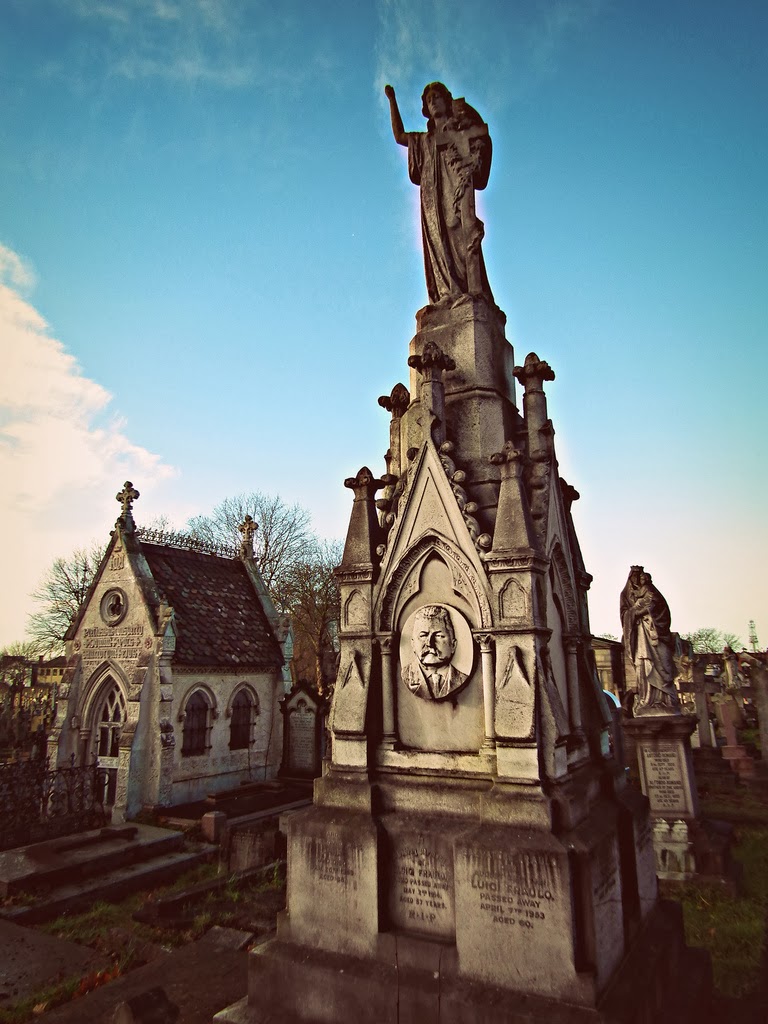