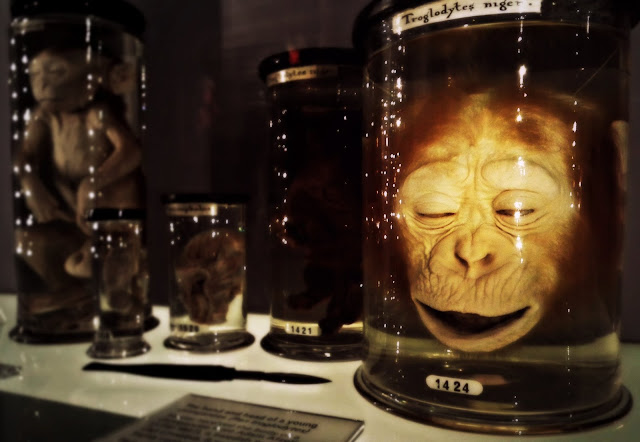 I didn’t see the ‘Strictly No Photography’ signs until I was half way around the Hunterian Museum. Honest. Until I spotted the sign I had been blatantly clicking away, making no effort to disguise the camera or what I was doing. Despite the CCTV cameras everywhere no one approached me to tell me to stop. Later, when I went to pay for a book I’d bought, a bank of CCTV camera monitors were right next to the desk where the sole member of staff was sitting. She hadn’t noticed me because she was looking at shoes on the internet. I didn’t take any more pictures once I’d seen the sign but I couldn’t bring myself to delete the ones I’d already taken.


The museum is based around the original collection of anatomical specimens collected by 18th Century surgeon John Hunter and is housed at the Royal College of Surgeons in Lincoln’s Inn Fields. It’s one of London’s quirkier museums and well worth a visit.

A decapitated chimpanzee youngster is one of the more disturbing exhibits in a Museum full of anatomical freaks and grotesquery. As well as the mutilated, maimed and diseased body parts that fill hundreds of glass jars there are numerous teratological specimens (mutants) as well including two headed puppies and kittens. There is a hugely enlarged hydrocephalic skull (see below), half of Charles Babbage’s brain in a pickle jar (that’s what you get for inventing the computer), the skeleton of a giant, and miscellaneous tumours and deformities affecting every conceivable body part. One cabinet is filled with sliced and chopped penises, treated with as much ceremony as a butcher would treat a pork sausage or a length of chorizo or bratwurst. They are flayed open to display the inner workings, suffering from strange growths, cankers and carbuncles or horribly distended foreskins, or foreskins so tight that they stopped the circulation at the tip. They were ripped, slashed and slit and preserved for posterity whilst their poor owners wander around missing their closest friend in the whole world. It was quite possibly the most ghastly thing I have ever seen. 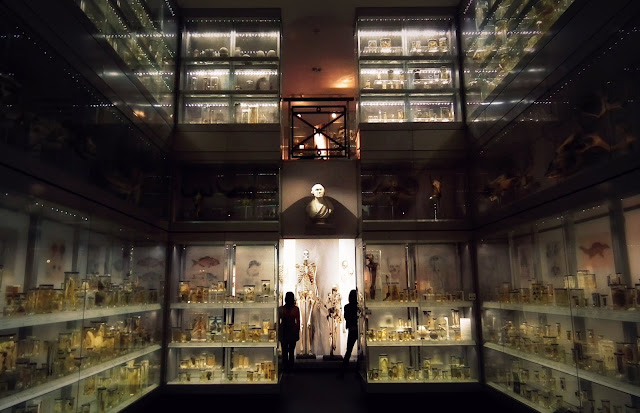 The tall skeleton (7’7” or 2.31metres) in the cabinet beneath the bust of John Hunter belonged to Charles Byrne, the Irish Giant, who died of grief and gin at the age of 22 after his pocket was picked of his £700 life savings when he was out boozing on the London streets. £700 was a lot of money in 1783 and Byrne had amassed his small fortune exhibiting himself in freak shows. Several noted collectors of anatomical curiosities had shown an interest in acquiring his body during his lifetime but Byrne was horrified at the thought of being butchered and displayed after his death. He left instructions that he was to be buried at sea in a lead coffin. Hunter bribed one of Byrnes associates £500 to get the body for him. At an overnight stop on the way to the coast the Byrne was removed from the coffin and dispatched back to Hunter in London whilst the empty casket was filled with rocks to imitate the weight of the dead man. 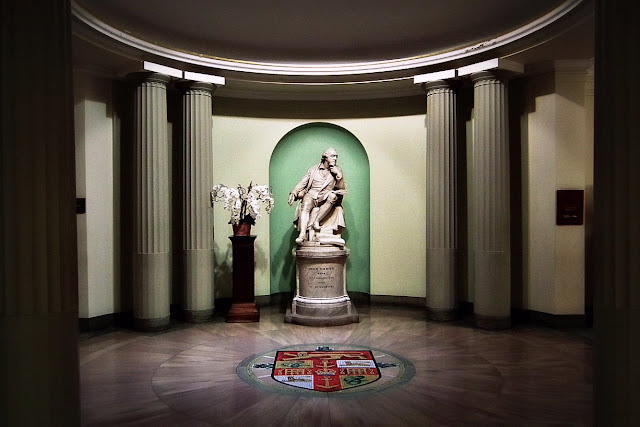 John Hunter (1728 to 1793)  was a pioneering surgeon and scientist in the days before anaesthesia or antiseptics. He was born in Scotland and was originally a cabinet maker until he followed his elder brother William to London. William was an anatomist and John joined him as an assistant in dissections. After studying medicine he became an army surgeon  and also worked at St Georges Hospital. There is a bust of him in Leicester Square which marks the site of his house where he arranged his collection of 14,000 anatomical preparations (animals and plants as well as human) into a teaching museum. He also had a menagerie at Earls Court. 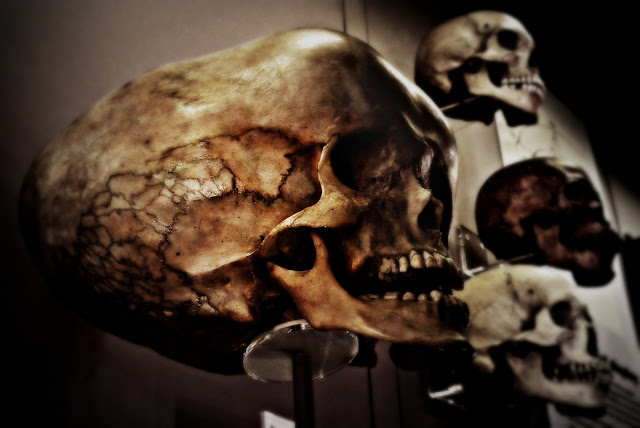 The Waddington quintuplets were born in 1789 in Lower Darwin near Blackburn in Lancashire. They were born prematurely to a 21 year old woman attended by a Dr Hull. Two of the children were born alive, one was stillborn and two were ‘macerated’ according to Dr Norma Ford Walker of the Department of Zoology in Toronto, by which I assume she means crushed (the two of the left certainly look like they have been crushed). The two live births survived only a very short time. The birth of quintuplets was an unheard of rarity in 1789 (when Dr Walker wrote a paper on the quintuplets in 1950 there had still only been 53 authenticated cases of them, ever…) and Dr Hull despatched the bodies of the foetuses to Dr Hunter in London. He was not allowed to send the placenta; the parents of the children were prepared, presumably for a consideration, to allow the babies themselves to become anatomical specimens. But they drew the line at the placenta which had to be disposed of according to local custom. Dr Walker’s paper “Determination of the Zygosity of the Waddington Quintuplets born in 1789” concludes that the 5 children were monozygotes i.e. all produced from one ovum. 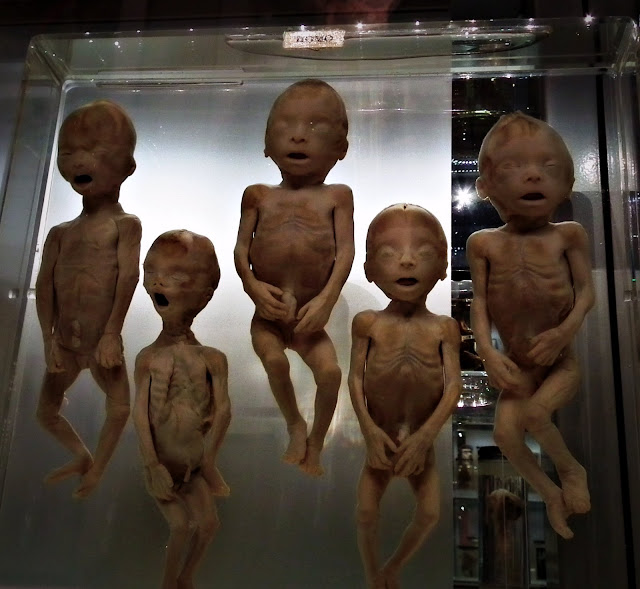 John Hunter’s apprentice, William Clift, took over the role of curator for the collection when the great surgeon died. He was responsible for acquiring the skeleton of Caroline Crachami, otherwise known as the Sicilian Dwarf or the Sicilian Fairy. In the Donations Books he scrupulously kept to record his acquisitions for the museum on Monday the 7th June 1824 he numbered her entry as 1217 and carefully noted “The body of Miss, or Mademoiselle, Crachami, the Sicilain dwarf, who died on Friday last, 4th June. 22½ inches high, weighing, by guess, between five and six pounds. Aged near nine years; born at Palermo (said to be born the day after the Battle of Waterloo, consequently the 19th June 1815-making her, if true, nine years wanting 15 days)”.  The specimen was presented, with almost indecent haste it has to be said (died on Friday, a specimen by Monday) by John Hunter’s brother in law, the surgeon Sir Everard Home.

Artist Eleanor Crook studied Classics at University and was settling into a career in archaeology when one day she decided to make a model of a Greek sculpture in her bedroom. One thing led to another and she soon found herself enrolling at St Martins for an art degree and then, once she had that, studying anatomy and forensic modelling. She was commissioned to create this wax model of the pioneering First World War plastic surgery techniques of Sir Harold Gillies.

Gillies was born in New Zealand and studied medicine at Cambridge. In the First World War he joined the Army Medical Corp and was posted to France where he became interested in reconstructive facial surgery. He persuaded the army to let him open a ward for facial injuries in Aldershot. Such was the demand that he was given an entire hospital within a matter of months, the Queens Hospital in Sidcup. Gillies and his colleagues performed 11,000 operations on 5000 patients during the war. Eleanor Crook told an interviewer  that “there were so many people coming through the hospital that Gillies said it was almost like a lab: if one thing didn’t work they’d try something else on the next patient.” Such was the horrific nature of many of the injuries that despairing patients happily accepted the risks of untried surgical techniques, anything that might help them look more normal. 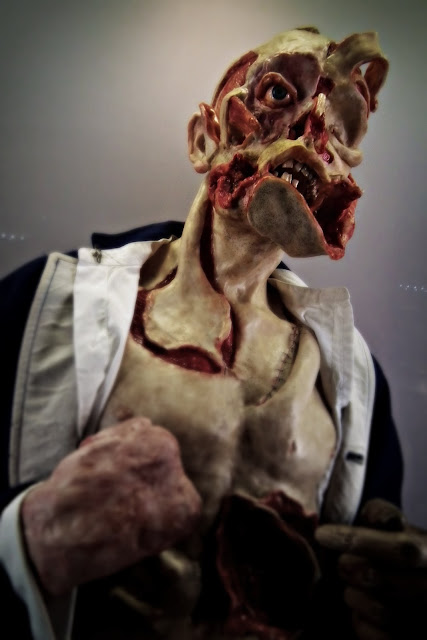 The Museum was heavily damaged by bombs in the Second World War and several prize exhibits were lost including the embalmed corpses of Maria Van Butchell and Miss Johnson.  On 20 May this year the museum closes until 2020 while the Royal College of Surgeons is being renovated. If you have never been there before the next two months are the only chance you are going to get to visit this extraordinary place.
Posted by David Bingham at 10:57