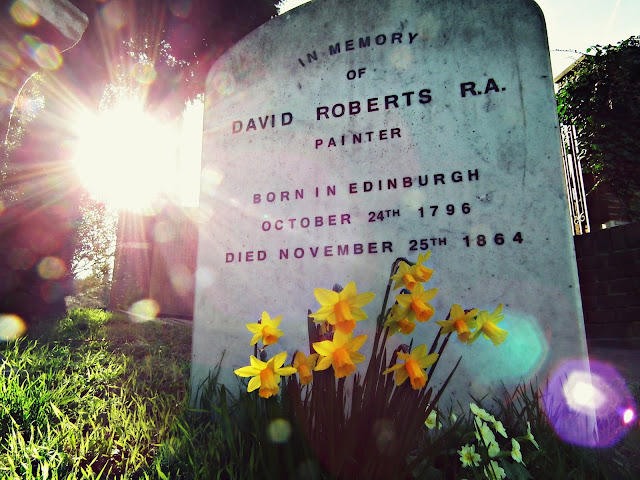 DEATH OF MR. DAVID ROBERTS. On the afternoon of Friday last an elderly gentleman walking in Berners Street fell down in fit of apoplexy. To the people who went to his rescue he was able to utter only two words-Fitzroy Street; he never spoke afterwards, and he died at seven o’clock on the evening of the same day. It was a Royal Academician—David Roberts; kindly, canny Scot, well-to-do, amazingly clever in his own sphere of art, and liked by all who knew him. (Glasgow Saturday Post, and Paisley and Renfrewshire Reformer - Saturday 03 December 1864).
The fatal Friday afternoon stroll would have been a short one. David Roberts had lived at 7 Fitzroy Street since at least the late 1830’s. If he followed the most direct route from his home he would have headed due south into Charlotte Street ambling along for about 350 yards before turning right into Goodge Street, then walked straight on for 150 yards or so before making a lethal left turn into Berners Street  and collapsing somewhere along its couple of hundred yards of pavement. He had walked less than half a mile in total; even for a man in his late sixties it wouldn’t have been a perambulation of more than 10 minutes. The breathlessly croaked words “Fitzroy Street” were the bathetic final utterance, his wholly unremarkable last words. They served their purpose it seems; he was conveyed back to his home by a gaggle of rescuers to die on the dot of 7.00pm.
“Apoplexy: A venerable term for a stroke, a cerebrovascular accident (CVA), often associated with loss of consciousness and paralysis of various parts of the body. The word "apoplexy" comes from the Greek "apoplexia" meaning a seizure, in the sense of being struck down. In Greek "plexe" is "a stroke." The ancients believed that someone suffering a stroke (or any sudden incapacity) had been struck down by the gods.” (medicinenet.com)
“From the late 14th to the late 19th century, apoplexy referred to any sudden death that began with a sudden loss of consciousness, especially one in which the victim died within a matter of seconds after losing consciousness. The word apoplexy was sometimes used to refer to the symptom of sudden loss of consciousness immediately preceding death. Ruptured aortic aneurysms, and even heart attacks and strokes were referred to as apoplexy in the past, because before the advent of medical science there was limited ability to differentiate abnormal conditions and diseased states.” (Wikipedia)


He was born at Stockbridge near Edinburgh on October 24 1796, the son of a shoemaker. His career as a housepainter began at the tender age of 10 when he was apprenticed to Gavin Beugo, a decorator. Along with fellow apprentice and life long friend David Ramsay Hay he studied art in the evenings. As a young man he became a scenery painter for James Bannister’s circus on North College Street in Edinburgh joining them on tour as a stage designer and painter at a salary of 25 shillings a week and occasionally standing in a clown when required. In 1817 he moved to work as assistant stage designer at the Pantheon Theatre. When the theatre failed he was forced back into house painting. When the opportunity arose he returned to the theatre working at the Theatre Royal in Glasgow and Edinburgh, positions which eventually lead to offers of work in London from the Coburg Theatre (now known as the Old Vic), the Theatre Royal in Drury Lane and Covent Garden. Whilst working as a successful stage designer and scene painter he began a parallel career as a fine artist exhibiting a painting of Dryburgh Abbey at the British Institution and contributing two paintings to the first exhibition of the Society of British Artists.


It is a fact to be noted that David Roberts was in art wholly a self-educated man; he received but one week's instruction, when a boy, in the "Trustees' Academy," Edinburgh, where he is said to have made copies of two hands. We believe indeed that very little can be supplied to an artist by any special teaching; but in Roberts's nature there must have been unusual vital force, or he neither could have accomplished the immense quantity of work which we know that he performed, nor have taken the high standing that was so readily accorded to him by his contemporaries. (The Reader. February 1865)
While his career was in the ascendant, his private life was descending into catastrophe. In 1819 whilst working at the Theatre Royal in Edinburgh he had met an actress, Margaret McLachlan, with a fine figure and blond ringlets, who claimed to be the daughter of a gypsy and a highland clan chief. The infatuated pair married on 3rd July 1820 and just under a year later Margaret gave birth to their only child, Christine. He was 24, Margaret was 22. The marriage was not happy, Margaret turned out to be a drinker and secret tippling led eventually to chronic alcoholism. He was mortified by a wife who reeked of port and whisky and after eleven years of marriage the situation became intolerable to him. By now living in London he sent his wife back to Scotland in 1831. By one of those ironies which would be viewed as contrived if it appeared in the pages of a novel, his best friend from his days as an apprentice, David Ramsay Hay, was also married to an alcoholic though he ‘consoled’ himself with a mistress. On the eve of Margaret’s drunken departure for Scotland, he wrote to Hay; “If you do not know our cases are almost parallel. Yours is not as bad as mine, having some consolation. The state of my nerves is such I can scarcely write. But thank God she leaves tomorrow—I hope for ever.”


But the estranged Mrs Roberts still cast a shadow over his life. "I thank God I have had but one grievance, but that one has been a very sad one," he wrote. In 1854, in a bid for an increased allowance, Margaret started legal proceedings against him, which ended in a formal separation. Roberts was angry enough to call her "that brazen-faced monster", yet he seemed also to realise that his own ambitions, which took him so often away from home, may have contributed to his wife's decline. In one letter he writes: "I fear our sorrows are in most instances of our own creating." But after Margaret's death in 1860, he wrote of her to Hay with warmth and sadness. "I confess it, I loved her to the last, and I have every reason to believe she knew it." (TheScotsman 08 July 2006)


The Works of the Late Mr David Roberts. —" The Flaneur," in the Star, writes "The late David Roberts RA left behind him 976 sketches, the originals all his great and best known works. Amongst them are all the celebrated sketches of the Holy Land Pictures, intended to form a gallery of these sketches for public exhibition, as was done in the case of Mulready's sketches. Mr Roberts has also left behind him a remarkable book of sketches, with explanatory notes attached, forming quite a panoramic history of his life. Against the first of these is a memorandum, to the effect that the picture was sent to the Scotch Academy and refused, and that it was then sold to the artist's frame maker — and never paid for.  (Dundee Courier - Wednesday 14 December 1864).
His improved position gave him more leisure for travel, and he visited most of the countries of Europe in search of picturesque subjects, even extending his wanderings so far afield as Egypt and Syria. Towards the close of his life he was content to paint the more familiar beauties of England, and almost the last work on which he was engaged was a series of views on the Thames. He was a very popular artist in his day, though his reputation has now suffered a not undeserved eclipse. (Walter Armstrong, Dictionary of National Biography Vol.48 1885-1900).


He first began to travel in 1824, visiting Normandy and producing a painting of Rouen Cathedral which he sold for 80 guineas. He made further visits to France and the Netherlands during the remaining years of the 1820’s. In 1832, after sending his wife to live in Scotland, he ventured further afield, travelling to Spain and, significantly his first taste of the East, Tangier. After J.M.W. Turner convinced him to give up his work in the theatre and concentrate on landscape painting he resolved to travel to the near east. In August 1838 he set off on a long tour of Egypt, Nubia, the Sinai, the Holy Land, Jordan and Lebanon, recording every step of the way innumerable drawings. When he returned to England he spent seven years producing a series of lavish illustrated books of the scenes of his travels in the orient.
Change is the great monarch the universe; time, the sword of its dominion and empires, like men, are as the dust of its feet. Change ruled over the palaces of Tyre, and sat in the halls its desolation. Where is Gazna once the capital of a mighty empire. Shall we ask the waters the Lake Aspbaltites where they hide the thirteen cities of which Strabo speaks?—or make populous again the city of Veii, which has been a solitude for nineteen hundred years. I have been led into these passing reflections upon contemplating the remarkable "Drawings of the Holy Land, &c, David Roberts, A.R.A.." If any productions of this celebrated painter could have increased our estimation of his genius, certainly the magnificent drawings we have just seen are calculated to do so. The artist has brought to these great and momentous subjects a mind of equal grasp, a nobility of conception, and a vastness of execution absolutely wonderful. It is truly wonderful; it is truly surprising, how, the space of a few inches, he has been able to impress the spectator with a feeling of immensity, with a perfect appreciation the colossal order of the architecture; indeed, the columns, entablatures, pilasters, and inscriptions, seem upon so stupendous a scale, that might almost fancy that we hear the architect, in the golden fame of his triumphs, boastfully-asserting, " Other men build for a day; I build for eternity." Alas! the columns still survive; but they ungratefully conceal the name of their founder. (Yorkshire Gazette - Saturday 24 October 1840)


He was a very happy man. This must have been evident to all who had any acquaintance with him, for his genial temper manifested itself in his face, and his voice, and the mirth of his conversation. He had the enjoyment which belongs to the inclination and habit of industry, without the drawback of the stiffness, and narrowness, and restlessness which too often attend it. In the last autumn of his life, when he was absent from his regular work, and staying at Bonchurch with his daughter and son-in-law and their family, he occupied himself with cleaning and renovating his old sketches, conversing gaily all the while. His health was good; his fame was rising, as appeared by the constantly increasing prices given for his works; he was blessed in family affection, and rich in friends. He was passing into old age as happily as possible when he was struck down by a death which spared him the suffering of illness, infirmity, and decline. On the 25th ult. he went out from his own house in apparent health, and cheerful as usual. As our readers know, he staggered and fell in the street, and died at seven the same evening…. David Roberts, the Royal Academician, will be regretted far and near, and his death recorded as one of the grave losses of a grave year. (London Daily News - Thursday 01 December 1864)