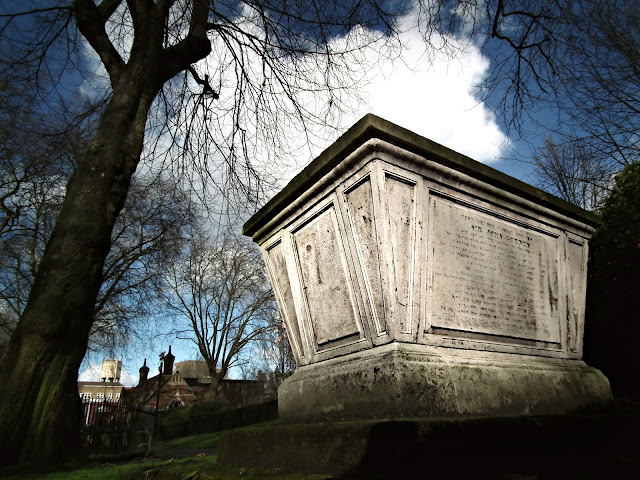 The chest tomb of Sir John Gurney in St Pancras churchyard has its inscription turned towards the hedge which surrounds it, as though somehow ashamed of the identity of its owner. As well it might be, Sir John was the man responsible for the execution of James Pratt and John Smith, the last men hung in the United Kingdom for the crime of sodomy. Sir John was born in Walworth, London in 1768 the son of a parliamentary stenographer. He was a bright boy, educated at St Paul’s School, who was determined to become a lawyer.  His training seems to have been mainly practical, accompanying his father in his duties at court, and he was called to the bar at Inner Temple in 1793. As a barrister he defended Arthur O’Connor on charges of high treason and took part as junior in the state trials of Thomas Hardy, John Horne Tooke, and John Thelwall in 1794 treason trials. He was not a Kings Counsel until 1816 and his greatest moment as a prosecutor was in 1820 when he procured the conviction of two of the Cato Street Conspirators. The Dictionary of National Biography, which does not mention his sentencing of Pratt and Smith, sums up his professional career; “he was a good criminal lawyer, though not deeply learned, and was an independent and acute, but severe and somewhat harsh judge.”

In August 1835 unemployed 32 year old James Pratt, a married man with two young daughters who lived in Deptford, and 34 year old labourer John Smith were caught in flagrante engaging in anal sex in the room of 68 year William Bonill in Southwark. The full wrath of the law fell on the two men who were thunderously charged with the capital offence of sodomy, James Pratt “not having the fear of God before his eyes, nor regarding the order of nature, but being moved and seduced by the instigation of the devil, then and there, to wit, on the same day ..... feloniously, wickedly, diabolically, and against the order of nature, was consenting to and did permit and suffer the said John Smith ....feloniously, wickedly, diabolically, and against the order of nature, to have a venereal affair with him.... and then and there carnally to know him.. and.. to commit and perpetrate the said most detestable, horrid, and abominable crime (among Christians not to be named) called buggery, to the great displeasure of Almighty God, to the great scandal of all human kind... and against the peace of our lord the king, his crown and dignity.” The hapless William Bonill was said to have “feloniously and maliciously did incite, move, procure, counsel, hire, and command the said John Smith and James Pratt the felony aforesaid”; a lesser but still very serious charge.

The trial was held on September 21st with Sir John Gurney the presiding judge. The evidence against the three men was provided by William Bonill’s landlord, George Berkshire and his wife and the policeman who had arrested them at the Berkshire’s instigation. George Berkshire told the court that he lived at 45 George Street, Blackfriars Road where he kept a coal shed and horses for hire. William Bonill had been his lodger for about thirteen months. At four o’clock on the 29th August James Smith came into the shop and inquired after Bonill. Berkshire let him through and Smith went down the passage and opened the private door at the rear of the premises to allow in Pratt who went immediately up the stairs to Bonill’s room with Smith following. Berkshire went out into the backyard where the stable had a loft above it. He told the court that he removed a tile to get a view of Bonill’s room where he saw “Bonill sitting on one side of the window and Smith on the other, looking out of the window and talking together – after a few minutes I saw Pratt come and put himself down on Bonill's knee.... he then rose up, as if pushed by Smith, and placed himself on Smith's knee; and there I saw him for five or six minutes.” Feeling cramped under the eaves peering out of a hole in the tiles Berkshire climbed down and went back inside. He told his wife what he had seen and then went into the back room to have his tea. Five or ten minutes later his flustered wife fetched to look through the keyhole in Bonill’s door where he saw “Pratt laying on his back with his trowsers below his knees, and with his body curled up & his knees were up – Smith was upon him – .. Smith's cloths were below his knees.” He was asked if he had seen any motion. “Yes; the motion of the body, and a great deal of fondness and kissing,” he replied. “I put my shoulder against the door, and burst the catch of the latch from the door, opened it, and saw Pratt and Smith – Pratt said, "Oh, my God, we are caught," or, "caught at last," I will not swear which....he exclaimed very bitterly to me for mercy – they pulled their clothes up as quick as they could, and both fell on their knees, and offered me their purses, and begged hard for me to let them go.” William Bonill was not in the room, he returned shortly afterwards with a jug of ale. “He seemed surprised at seeing me there,” said Berkshire, “and asked what was the matter – I called him an old villain and said, ‘You know what is the matter; you have been practising this in my place for some time past.’” The shocked Bonill tried to calm the situation down and suggested Berkshire join them in a drink. He told them he would not drink in such society and went to the nearest station house to fetch a policeman, Robert Valentine.

Valentine told the court that he had taken the two men into custody and immediately carried out an examination of their linen; “I found the linen of Smith in a very dirty state in front – the back part of his linen was clean,” he testified, “It appeared to me dirt from the fundament.” In contrast Pratt’s linen was clean at the front but the back “was in a very foul state – it appeared a different matter from Smith's, of a sort of slimey, glutinous nature, and rather yellow.” Judge Gurney asked “did it resemble the seed of man?” to which Constable Valentine answered in the affirmative. “Was it in a wet or dry State?” the Judge quizzed the policeman further. “In a wet state,” said Valentine, “it appeared to be recently done.” The three men were not allowed to give evidence in their own defence though six witnesses were called to give evidence as to the good character of James Pratt but it did him no good; the jury found all three men guilty and Judge Gurney sentenced James Pratt and John Smith to death and the 68 year old William Bonill to 14 years transportation.

The only hope for the condemned men lay in the royal prerogative to commute death sentences to lesser sentences of imprisonment our transportation. While they waited the Kings decision they remained at Newgate, separated from the other prisoners for their own protection because of the nature of their offences. Whilst there they were visited by a young reporter, Charles Dickens, who wrote up his visit in a piece entitled “A Visit to Newgate”, published the following year in ‘Sketches by Boz’. The warder who showed Dickens around did not rate the chances of Royal clemency for Pratt and Smith very highly, the “two had nothing to expect from the mercy of the crown; their doom was sealed; no plea could be urged in extenuation of their crime, and they well knew that for them there was no hope in this world. 'The two short ones,' the turnkey whispered, 'were dead men.'” Their anguish was palpable; Dickens reports passing by their room twice and seeing them immobile and apparently frozen in despair in exactly the same positions both times. On Friday 20 November Charles Law, the then holder of the ancient legal office of Recorder of London, made a trip to Brighton to report to the King, William IV, and the Privy Council on all the prisoners who had been capitally convicted at the September and October Sessions of the Central Criminal Court; over 20 cases of men condemned to be executed. After much deliberation His Majesty commuted all the death sentences to transportation except for James Pratt and John Smith, “upon whom the law is left to take its course, and who were ordered for execution” the following week. 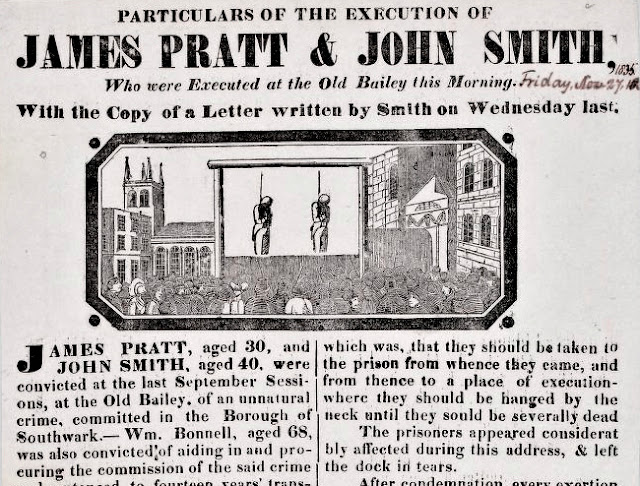 Many newspapers ran reports of the execution of the two men, none of them mentioned the ‘unnameable offence’ for which they were to hang. This is from the Surrey Advertiser of Friday 04 December 1835;

Execution.—On Friday morning, at the usual hour, the sentence of the law was carried into effect upon James Pratt, aged 32 and John Smith, aged 34, who were convicted at the September Sessions of the Central Criminal Court, of a capital offence. The Sheriffs arrived at Newgate about half past seven o'clock, and immediately proceeded to visit the prisoners, whom they found engaged in prayer with the Rev. Mr. Cotton, the Chaplain of the gaol, and Mr. Baker. Both the culprits appeared in a very weak state, and when eight o'clock, the hour of execution, arrived, it was found necessary almost to carry them from their cells to the Press-room. Pratt, especially, appeared dreadfully weak and dejected. While Smith was being pinioned, Pratt appeared to suffer dreadfully. His groans resounded through the prison, and while he was pinioning, repeatedly exclaimed, "Oh, God, this is horrible, this is indeed horrible." He at this time was so weak, that the executioner's assistants found it necessary to hold him in their arms to prevent him from falling to the ground. All the preparations having been completed, the melancholy procession proceeded to the scaffold, and in the room leading from the debtor's door, as it is called, the ceremony of delivering the prisoners to the Sheriffs of Middlesex, was performed by Mr. Cope, the Governor of Newgate. Smith was the first who ascended the scaffold, and immediately afterwards Pratt was also assisted the steps, and placed under the beam. The necessary preparations having been performed, the bolt was drawn, and after a very short struggle the culprits ceased to exist. Pratt was a married man. The other culprit was single. On Thursday night Pratt was visited by a Dissenting Minister, to whom he eventually confessed his guilt.

William Bonill was transported to Australia where he died in Tasmania in 1841 at the age of 74. Baron Gurney died, after a long and distinguished career, at his house in Lincoln’s Inn Fields in 1845 at the age of 77.
Posted by David Bingham at 12:47