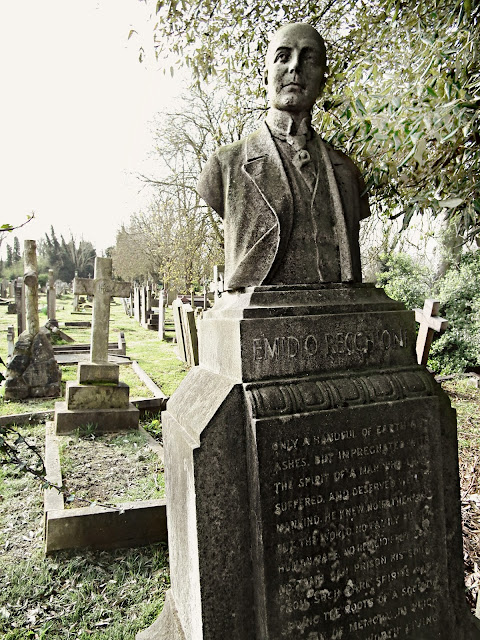 On the 4th June 1932 a pair of bored policemen stopped and searched a 25 year old working man, Angelo Sbardellotto, in the Piazza Venezia in Rome simply because they didn’t like the look of his face. In one of his pockets they found a Swiss passport, a circumstance they found vaguely suspicious. As they continued their search through his other pockets they found first a pistol, further fuelling their mistrust, and then, abolishing suspicion in an instant and replacing it with cast iron certainty, not one but two unexploded bombs.  Sbardellotto was taken to police headquarters where fists, boots and truncheons soon got him to reveal that he was planning to assassinate no less a person than il duce, Mussolini himself, and the names and addresses of his accomplices. During his two day trial, which started on the 11th June and inevitably resulted in a guilty verdict, journalists remarked particularly on his simian appearance, his low forehead and his ‘surly and sinister’ looks. Sentencing was deferred to a Special Tribunal which sat on the 16th June and ordered the death penalty for the failed assassin. At dawn the following day at Bretta Fort in Rome he was shot in the back by a platoon of Militia. His last words before receiving a fusillade between the shoulder blades were ‘Long live Anarchy!’  One of those named in Sbardellotto’s blood spattered confession as soliciting and funding the assassination attempt was a certain Emidio Recchioni, a respectable 68 year old living in London and running an Italian delicatessen at 37 Old Compton Street in Soho.  The Fascist authorities were unable to act against a British passport holding ex patriate but word of Recchioni’s supposed involvement in the Mussolini plot was leaked to the press and on the 11th November the Daily Telegraph printed a story naming him. Further stories followed and in June 1933 an outraged Recchioni sued the Daily Telegraph for libel. The Gloucester Citizen of Tuesday 04 July 1933 tells the full story:

A plot to assassinate Mussolini led to a libel suit against Lord Camrose in the King's Bench Division today. The plaintiff was Mr. Emilio Recchioni, of Old Compton-street, London, W.1, and he sued Lord Camrose, as representing the Daily Telegraph, in respect of certain statements which appeared in that newspaper. Mr. Maurice Healy, K.C., for Mr. Recchioni, said that last year, a man named Sbardelotto was arrested in Rome. He was supposed to have been found lurking with bombs to throw at Signor Mussolini. He was condemned to death and executed. Last November the 11 the Daily Telegraph published a message from its own correspondent in Rome headed “Anti-Fascists in London." It referred to a confession by Sbardelotto and added “according to this the plot matured in Brussels and Paris, while the money (about £35) was provided through the agency of a man named Recchioni, who is said to be a prominent member of a group of anti-Fascists in London." Mr Healey said that the defence was that these statements did not refer to the plaintiff, and that the words did not bear the meaning Mr. Recchioni attached to them.

Not Ashamed To Be Anti-Fascist Mr. Recchioni had lived in this country for many years, and, latterly, had become naturalised. He was managing director of the Italian Produce Co., of Soho, and the Carrara Marble and Granite Company. Mr. Healy said that there would be evidence that Mr. Recchioni's family were the only bearers of that name in London. "The truth is," he added, "that Mr. Recchioni is a strong anti-Fascist, and is not ashamed it." But it was one thing to be an opponent of a particular political party, and quite another thing support it by methods which were against the laws of God and man and were despised by all decent people.

Black Looks The moment the article appeared, Mr. Recchioni began to receive ‘black looks’ from everyone. Things were scrawled on the shutters of his shop, there were insulting remarks, people passing him the street turned their heads away, and when he went to a cinema people turned and said, “What cheek for a man like that to come in here." Business people wrote asking that his accounts should closed, money was sent back from charities to which he had subscribed, and finally the Italian Chamber of Commerce here wrote him for an explanation. Indignant at the treatment he had received Mr. Recchioni resigned from the Chamber, but that did not prevent them from solemnly expelling him from membership.

Obscure Paragraph On June 27. in the Daily Telegraph, an 'obscure paragraph’ appeared to the effect that "Recchioni, whose name was mentioned in connection with the plot against Mussolini, had been excluded from membership of the Italian Colony in London.”  If the libel had appeared in certain journals a great deal of harm might not have been done, but the Daily Telegraph was a serious organ of public opinion, and shunned sensationalism. Yet, as far he was aware, it had not published a single word to correct the mischief.  Mr. J. G. Trapnell, K.C., cross-examining Mr Recchioni : “Have you described the Fascists' methods as ‘Fascist rascality’?” - It is a fact. They are against freedom. I have taken this action against the Daily Telegraph because it is a free paper in a free country, Mr. Recchioni added. No evidence was called for the defence. The jury returned a verdict for Mr. Recchioni, with damages at £1,750.

£1750 was a substantial amount in the 1930’s and the supposedly defamed shopkeeper must have been particularly pleased with the outcome of the trial given that every single word in the article was true. The mild mannered Italian salami seller was not merely a prominent anti fascist, he was a committed anarchist who, contrary to what his counsel had said in court, was perfectly willing to support his cause “by methods which were against the laws of God and man and were despised by all decent people.” Quite why the Daily Telegraph failed to put up any defence remained a mystery until the files on the case in the national archive were opened in the late 1990’s. These revealed that when the Telegraph approached Special Branch for assistance before the case reached court the Home Secretary and the Metropolitan Police Commissioner blocked any attempts to help the newspaper. The fragile coalition National Government was in power and they were concerned about the possible political fallout from revelations that Prime Minister Ramsay MacDonald’s socialist past had involved a potentially embarrassing friendship with an Italian Anarchist. A newspaper search would have given the Telegraph’s barrister something to counter the barefaced lies of Signor Recchioni who was certainly no novice when it came to organising assassination attempts. For example,   the Manchester Courier and Lancashire General Advertiser reported on Tuesday 10 July 1894:

Rome, Monday. It is announced from Ancona that the police have succeeded arresting a well known Anarchist named Recchioni on suspicion of being an accomplice of the man Lega, who made the attempt on the life of Signor Crispi. Two other Anarchists, also believed to be accomplices, are still at liberty.

On June 16th 1894 the Italian Prime Minister had been returning home from lunch on the Via Gregoriani in Rome when 26 year old Paolo Lega had tried to shoot him as he sat his carriage. The pistol misfired and before Lega had time to draw and aim his second pistol the coachman had jumped on him causing a second shot to fire wide. Lega was tried and received a prison sentence of 20 years and 17 days. Recchioni and two others were arrested and tried as accomplices but acquitted on 30th November 1895. Despite the acquittal two days later Recchioni was put under house arrest before being transferred to the prison colony on the Tremiti islands.

Emidio Recchioni was born in Russi, 8 miles southwest of Ravenna in 1864. He had worked on the railways and fallen under the influence of older anarchist colleagues. He became an activist who was regarded by the police as the anarchists “most active and influential propagandist.” He worked on several anarchist newspapers using the pen names of Rastignac and Nemo. He spent several spells in prison and in 1899 he left Italy and moved to London where he worked as a shop assistant, coal merchant and wine seller. In 1909 he opened his famous Italian grocery in Old Compton Street, King Bomba where his clients availed themselves of such exotica as tinned tomatoes, olive oil, salami, parmesan, prosciutto and torrone and later diversified into importing marble and granite from Carrara. The profits from his business enterprises went into financing anarchist activities. He married in 1911 and had two children, Vera and Vero, his son, a friend of George Orwell, later anglicised his name to Vernon Richards and became a well known left wing writer.  The family lived above the delicatessen and the flat above the shop was also the centre of a vigorous anti fascist movement which used a masonic lodge I Druidi as a cover for their activities. These most definitely included violent resistance to the Italian fascists. The fascists responded in kind – following the Daily Telegraph story two thuggish looking fascist foot soldiers appeared at King Bomba and threatened Recchioni with a firing squad a la Sbardellotto. The indomitable old anarchist produced a pistol and promised them a bullet each beneath their Neanderthal brow ridge if they didn’t quit his premises; they quit.

Recchioni was involved in various other attempts to assassinate Mussolini, financing the entry into Italy of a hired assassin to kill the dictator, plotting an attack in Geneva with Camillo Berneri and when that failed coming up with another plan to bomb, by plane, il duce’s villa in Rome. The plots were as ingenious and unsuccessful as the various CIA conspiracies to murder Castro. In 1933 Recchioni developed cancer of the throat and in 1934 he went to Paris to undergo an operation. He died in the operating theatre at the hospital of Neuilly-sur-Seine on the 31st of March. His body was brought back to London by his family. The inscription on his tomb at Kensal Green reads: ‘Only a handful of earth and ashes, but impregnated with the spirit of a man who lived, suffered, and deserved well of mankind. He knew no fatherland but the world, no family but the human race, no religion but love. No tomb can prison his soul. From such rare spirits must spring the roots of a society worthy of memory in which life will be worth living.’ 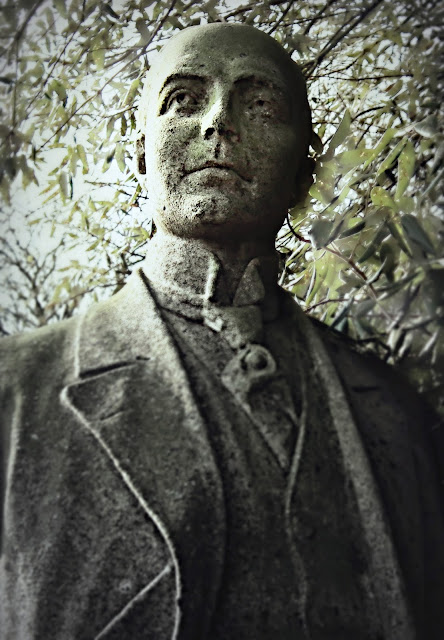