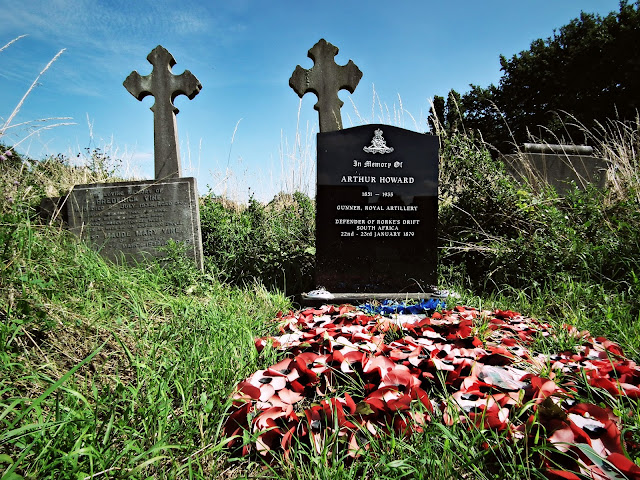 He must have thought that any part he played in the war against the Zulus had long since been forgotten. It certainly would never have occurred to him that he was in any way newsworthy and if he hadn’t been blind the 79 year old Arthur Howard would have been astonished to see a story about himself widely reported in the newspapers. Not least because it was his death on another continent that was making the news and, as far as he was concerned, aged and decrepit he may be but he was still alive and still living at 7 Harton Street in Deptford and was definitely not dead on the other side of the world in Sydney;

A RORKE’S DRIFT HERO. Death of Natal Battle Survivor. SYDNEY, Monday (Reuter).—The death is announced of Mr. Howard, an Englishman aged 74, a survivor of the battle of Rorke’s Drift. Mr. Howard arrived in Australia in 1908. As recently as Friday he complained of an assegai wound received in the fight. In addition to Neuville’s famous picture of the defence of Rorke’s Drift, the Sydney Art Gallery has a picture showing Mr. Howard assisting and carrying a wounded man from a blazing hospital.
Portsmouth Evening News - Monday 10 February 1930

When word got out that Reuters was wrong a reporter from the Daily Mirror turned up at Deptford to interview the old war hero. "I have been living in Kent for 40 years, and never have been to Australia." be said to the reporter. "As you can see, I am quite alive. How the Sydney Art Gallery can have a picture of me leaving the burning hospital shouldering a man I cannot understand. It was as much as I could do to leave the building myself when the Zulus burned it, without carrying anyone. There were only 86 of us. And I cannot think of another Arthur Howard among the number." Arthur charitably assumed that it was a case of mistaken identity but there are a couple of details in the original Reuters’ report, the claim that Arthur had arrived in Australia in 1908 and that he had been complaining of an old Assegai wound as recently as the previous Friday, make it more probable that the news agency had been unwittingly duped by the death of an imposter.  Fake survivors of the heroic action were not uncommon; there were at least three known cases for example of impersonators who claimed to be John Williams, the only survivor of the battle to be awarded a Victoria Cross. A man convicted at Tredegar Court of burglary sought the mercy of the court saying he was the John Williams, the Rorke’s Drift survivor fallen on hard times (but received 14 days hard labour when his deception was discovered). Another man arraigned at Cardiff for theft also claimed to be Williams and said that if convicted he would lose his army pension; the sympathetic magistrate let him off with a caution and the malefactor promptly disappeared causing a minor scandal which the real Williams was obliged to clear up by getting a notice printed in the paper protesting his innocence.  In Australia the ersatz Arthur Howard presumably got away with 22 years of bragging about being one of the hopelessly outnumbered heroic 150 who had seen off 4000 Zulu warriors and had uncountable pints of warm beer bought for him by admiring Aussies after he showed them his appendectomy scar and gave them some cock and bull story about how he thought he had breathed his last when the biggest, toughest and strongest warrior of the whole lot drove his razor sharp assegai up to the hilt into his belly. No one had the faintest idea that he was a lying pommy bastard until his death was reported in the papers and over in Deptford the real Arthur Howard came forward to express his surprise at finding out that he had died in Sydney.
The real Arthur Howard was born in 1851 in Eynsford, Kent, the son of an agricultural worker.  When he left the village school he worked on local farms eventually becoming a groom. At the age of 20 he decided to enlist and joined the Royal Regiment of Artillery at Woolwich Barracks. His military records show that he was just under 5 foot 7 and weighed a very modest 10 stone despite his muscular development being noted as good. He was posted to Newcastle in 1872 where he was admitted to military hospital for 10 days suffering from syphilis, presumably caught from some good time Geordie girl on a drunken night out on the town. In 1875 he was posted to Ireland and in 1877 he was transferred to the 5th Brigade as servant and batsman to Major Arthur Harness (the Major would have called him Howard and he would have called the Major Sir, preventing the confusion that sharing the first name Arthur could have caused in a more democratic institution).  In 1878 Arthur and Arthur found themselves aboard HMS Dublin Castle and on the way to active service in South Africa in the 9th Cape Frontier War and the Anglo-Zulu war of 1879.

Following an order to move up country to Rorke’s Drift Arthur the batman, our Arthur, was admitted to the small hospital suffering from fever. During the legendary defence of the mission station Arthur was in the north-west corner room of the hospital with Gunner Evans and a borrowed rifle. The two soldiers took pot shots from the veranda and the window at the mass of Zulu warriors who had gathered in front of the building. When the Zulus set fire to the hospital roof the two gunners were forced to flee the burning building. Arthur, unfortunately, turned the wrong way when they ran out of the front of the hospital and found himself confronting a horde of enraged Zulu warriors. Left with little choice he leapt the defences and crawled into undergrowth where he found himself surrounded by dead horses, the victims of the first onslaught by the Zulus.  His greatest anxiety, he said later, was to hide the red stripes of his overalls which he thought might give him away even in the darkness. He also had a close call when a stray bullet mortally wounded a wandering pig. The dying animal, squealing piteously, settled down amongst the dead horses and expired very slowly and noisily, almost giving Arthur’s position away. Miraculously he managed to remain undetected until the following morning despite being almost trampled on several times during the night by successive waves of attacking and retreating Zulu’s.  Rorke’s Drift wasn’t the last action Arthur saw; he was also present at Ulundi, the last battle of the Zulu War.

In October 1879 the Arthur returned to England on HMS Edinburgh Castle and was posted to Hillsborough Barracks in Sheffield. Whilst up north he met a pantry maid called Frances Bird who he brought back to London with him when he was transferred to the Cadets Academy in Woolwich. The couple were married in 1882 and had a daughter, Elsie, the following year. Elsie was barely six when her mother died in 1889 and was sent to live with relatives in Sheffield. The following year Arthur obtained his discharge from the army so that he could be with his daughter and was granted a pension of 11 pence a day. He moved briefly to Sheffield but then brought Elsie back to Woolwich where he had found a job at the Royal Arsenal as an ammunition case examiner and lodgings at Parry Place in Plumstead.  He died on 15th July 1935 at St Alfege Hospital in Greenwich; his death certificate stating that he died of senility. He was buried in Brockley Cemetery in an unmarked grave paid for by his Deptford landlord Walter Tanner. The headstone that now marks the grave was unveiled at a special ceremony in September 2012 presided over by the Mayor of Lewisham and HRH Prince Shange of Zululand following a campaign by Corporal Bugler Tim Needham of the Royal Marines to memorialise the graves of the defenders of Rorke’s Drift.
Posted by David Bingham at 14:02