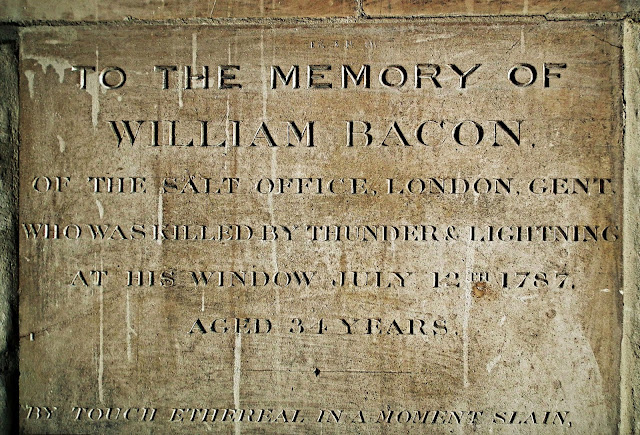 The weather record of the Gentleman’s Magazine states that the evening of 12 July 1787 was dark and cloudy with thunder. Unlike the abundance of turf destroying summer chafers that month (“rooks should have great merit with the farmer, as they prevent these pernicious insects becoming numerous”), a rain storm on the 10th which “beat down wheat in many places”, the bloom of lime trees hanging in fine fragment tassels noted on the 19th, the fineness of the cherries and wood strawberries and the first flights of young partridges, the storm of the 12th merits not a single footnote to the weather watcher who compiled July’s statistics, despite being ferocious enough for lightning to have killed at least two people in London.
A well known memorial in the porch of St Mary-at-Lambeth (now the Garden Museum) commemorates William Bacon of the Salt Office:

To the memory of
William Bacon
of the Salt Office London, Gent
Who was killed by thunder and lightning
at his window July 12 1787
Aged 34 years
By touch ethereal in a moment slain
He felt the power of death but not the pain
Swift as the lightning glanced his spirit flew
And bade the rough tempestuous world adieu
Short was his passage to that peaceful shore
Where storms annoy and dangers threat no more

There are many Bacons in the Parish of St Mary’s and when the 20 year old William Bacon married Miss Cooper of Norfolk in February 1773 the ceremony probably took place in the church. We know very little about the life of William Bacon but we know a great deal about his death. The Gentleman’s Magazine reported it in detail:

He was killed at his house near the Archbishop's palace Lambeth, at about a quarter before six in the evening by a flash of lightning. At the beginning of the storm he was drinking tea with his wife; the back windows of the one pair of stairs to the South having been open all day he went up for the purpose of shutting them and in the action of lifting up his right arm received the stroke, which tore his coat eight inches in length and four in breadth, whence it entered his right side nearly opposite his heart went through his body and out of the left hip and down his left leg to his buckle, which melted and tore the upper leather of his shoe from the sole. His dog being at that foot was also struck dead after which the lightning penetrated the wainscot and floor of the one pair of stairs and made its way into the front parlour North where it tore the wainscot in a singular manner and went off with an explosion louder than any piece of ordnance. Another account says that he owed his death to a gun being laid across the window placed there to prevent thieves from breaking into the house which on this occasion operated as a conductor for the lightning for at the instant that he was shutting the window he received the electrical fire from the barrel of the gun which he accidentally touched and was immediately struck dead. The violence of the stroke was such that it tore out his intestines and made his body a most shocking spectacle.
Gentleman's Magazine 1787

The Norfolk Chronicle provided some additional, lurid details about the ghastly incident on Saturday 21 July:

The unfortunate Mr. Bacon, who was killed by lightning Lambeth last, owes his death to a gun being laid across the window, placed there to prevent thieves from breaking into the house which on this occasion operated as a conductor for the lightning; for at the instant that he was shutting the window he received the electrical fire from the barrel of the gun, which he accidentally touched, and was immediately struck dead. The violence of the stroke was such that it tore out his intestines, and made his body a most shocking spectacle; he was first discovered by a little girl in the house, who was so terrified as to be unable to explain the cause of her alarm to Mrs. Bacon, who went into the room herself and, in consequence of seeing this dreadful sight, has been at times in fits ever since, and great doubts are entertained whether she will ever recover.

As well as reporting on the death of William Bacon the Chelmsford Chronicle of Friday 20 July reported on another London household which had its own close call with a wayward electrical discharge:

During the progress of the storm, it was observed, that the lightning struck the earth frequently, and the clouds then made a prodigious discharge. The storm of thunder and lightning which proved so fatal to Mr. Bacon, of Lambeth, on Thursday last, damaged also the houses of Mr. Wood, watchmaker, and Mrs. Ash of Windmill-street, Tottenham Court Road, in a remarkable manner. At Mr. Wood's house the lightning melted the bell wire, and burned the wainscot near it in every room, entirely consumed a new bonnet of Mrs. Wood's just brought home, and lying on the table in the parlour, threw down the plates, one of which it scorched, from the shelves in the kitchen below, tore the plaster from the wall, killed a sparrow that was hopping about in the garden behind the house, and went off through the bell-hole near the door with an explosion like a gun. Although Mr. and Mrs. Wood were surrounded with fire, neither they nor their servants received material injury during this tremendous scene.

The Chelmsford Chronicle also reveals that William Bacon was not the only fatality on the 12th of July:

Mr. Lazenby of Clement's-Inn Passage, tallow chandler, who was standing at his own door on Thursday last, during the thunder and lightning, was in an instant struck and fell into strong convulsions and although every assistance and means of relief was tried, he continued in a state of lunacy, attended with severe strong convulsion fits till yesterday morning, when he expired in all the dreadful agonies of madness.
Posted by David Bingham at 09:16