London's Dead: A guided tour of the capital's dead - Ed Glinert (Harper Collins 2008, out of print) 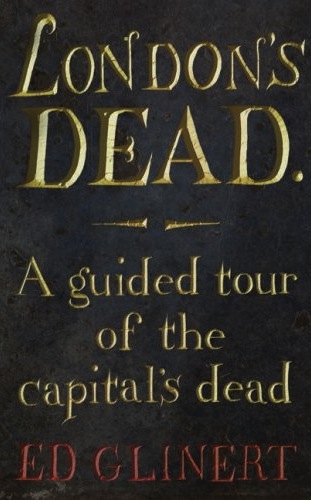 The thing about social media is that when you are talking you can never be sure who is listening.  A few years ago I wrote about Elias Ashmole on a photo I’d posted on Flickr of the Tradescant’s tomb in St Mary’s Churchyard, Lambeth:

In “London’s Dead” author Ed Glinert claims that there is a tradition that Elias Ashmole offered himself up for execution in place of Charles I “as those that ordered Charles’s execution were all Freemasons and no Mason could execute his Grand Master, Charles I, the two men swapped over and Ashmole allowed himself to be executed while Charles I lived out the rest of his days as Ashmole.” As I can’t find any trace of this rather outlandish theory on the web I can’t help wondering if Glinert isn’t pulling our leg here.

I was taken to task by Ed Glinert himself (who presumably had been googling himself):
Ed Glinert here. Of course there's nothing about Elias Ashmole swapping with Charles I on the Internet! This is a Masonic legend and the Masons, being a secret society, don't spread their secrets over the Web. I'm not saying it's true, just that it’s a well-known legend within Masonic circles. The Web is not the be-all and end-all of history.

That was me told. In actual fact the hypothesis, legend or whatever it is that Charles I was spared execution by switching places with Ashmole doesn’t seem to have been a masonic secret at all, or not one that they were keen to keep to themselves;  The Worshipful Brother Vice-Admiral Bertram Mordaunt Chambers CBE went public with the story in January 1929 with an article in the Daily Express headlined ‘Was Charles I Beheaded’.


‘London’s Dead: a tour of the capital’s dead’ was originally published by Harper Collins in 2008 but never seems to have been reprinted or put out as a paperback or. It is a compendium of material relating to death in London; stories of public executions, plagues, bizarre deaths, terrorist attacks, accounts of graveyards and cemeteries, myths and legends, the deaths of famous people and much more. Because it is supposedly a tour Glinert’s material is arranged geographically rather than chronologically or thematically which makes for a rather disjointed read.  The print is large and well spaced which means that there are rather fewer words than you would expect in a book of 320 pages and it never does more than skim he surface of its subject. In fact the whole thing has a rather perfunctory feel to it, as though the author has no real enthusiasm for the project. Or perhaps it was just rushed.  ‘London’s Dead’ isn’t bad; the subject is interesting and Glinert couldn’t write a truly dull book even if he tried. But this should have been a great book, not only is Ed Glinert a better writer than he shows himself here (‘East End Chronicles’ or ‘The London Compendium’) but the photographs in it were taken by the great Marc Atkins.

Atkin’s was an inspired choice as photographer – his wonderful photos of London taken wandering the streets with Iain Sinclair on the journeys that went into ‘Lights Out for the Territory’ were later published in the superb ‘Liquid City’ (just republished by Reaktion Press – buy it).  Atkin’s photos, taken in Bunhill Fields, Nunhead, Abney Park, Brompton, Mortlake and Kensal Green, are little  masterpieces with muted, autumnal colours and striking compositions that are both true to the spirit of the locations they were taken in but somehow more austerely beautiful.  What a huge disappointment that these wonderful pictures only appear in the book as small, smudged, dark, monochrome illustrations punctuating the text. What a wasted opportunity! It’s lucky that you can see the originals on Marc Atkin’s website, check out the whole set there.