The parched ground shall become a pool and the thirsty land springs of water; Ernest Schwarz of the Kalahari (1873-1928), Willesden New Cemetery 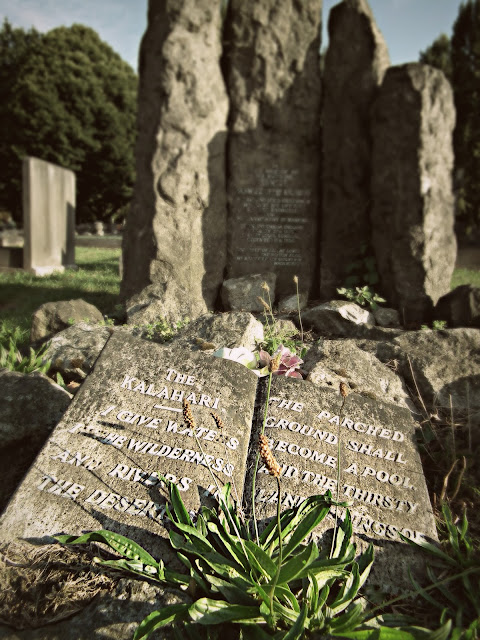 “A most extraordinary story was told me by the late Professor Ernest Schwarz of the Rhodes University College. Many years ago, he said, he was engaged in survey work between the headwaters of the Orange and Zambezi Rivers. With him was a half-breed Cape Bushman guide and interpreter. Through this man’s efforts Schwarz managed to make friends with a wandering remnant of a tribe of Cape Bushmen in that region and pitched his camp near theirs.
One day he noticed the strange little people flocking to a dry hollow in the ground near their camp. Following them he saw they were gathering about the remains of a gemsbuck. At a given signal they all began to eat, pausing occasionally to dance madly around the hollow.  Presently the feasting stopped, but the dancing continued with unabated vigour, men and women occasionally dropping out exhausted. When they had rested and recovered they again joined the madly dancing horde.


After some time of this Schwarz noticed a strange figure in the midst of the little people. It was a man loaded down with enormous strings of ostrich shell beads. He was given food and joined in the dance. Everyone treated him with the utmost respect. The festivities continued until sunset, when a sinister and expectant hush fell over the weird assembly of little figures who had stopped their dance. In the darkness two figures crept up behind the stranger, threw a thong of softened animal hide over his neck, braced their knees in the small of his back and strangled him! Schwarz had just witnessed a Bushman’s execution.” 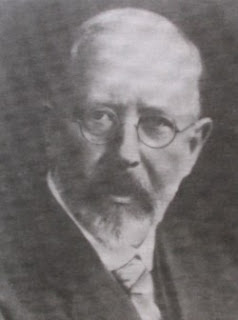 Ernest Hubert Lewis Schwarz was born in Lewisham on February 27 1873 the youngest of 12 children. His, father Frederick Maximilian Phillip Hubert Schwarz, was 60 at the time of his birth, his mother Johanna, 34. The couple were both from Germany, Frederick from Dusseldorf, Johanna from Schleswig-Holstein, but they married in London, at St Giles, in 1853 when he was an established South America merchant of 40 and she just a girl of 15. No doubt worn out by childbirth, she had her 12 children in just 18 years, Johanna died in April 1874 when Ernest would have barely been weaned. The motherless family were living on College Road in Dulwich at the time of the 1881 census and had moved to 80 Philbeach Gardens in what then known as Brompton but is now Earls Court by 1891. Ernest studied at the Royal College of Science in London and the School of Mines in Cambourne, Cornwall but despite being an excellent student he failed to gain a degree. In 1895, at the age of 22, Ernest moved to South Africa where he first worked as an editor on a short lived journal The Scientific African (it folded after just 5 issues)  before being appointed as a field geologist to the Geological Commission of the Cape of Good Hope, a post he kept for most of the following decade.  In 1899 his father died at the age of 86 leaving an estate of £18712 8s 6d to be shared amongst his brood. On 30 April 1904 in St George Anglican Cathedral, Cape Town Ernest married Daisy Murray Bowne Halloran and the following year he became the first professor of geology at Rhodes University College, Grahamstown, and simultaneously as keeper of geology and mineralogy at the Albany Museum.

According to the S2A3 “Schwarz was a tall, gentle and introspective man who found it difficult to accept disappointments. He was always full of ideas and explanatory hypotheses, and though these were not always fully worked out his suggestions were usually of value. He was inclined to draw quick conclusions, and his interests were wide, rather than intensive.”  Ernest liked to engage in speculation untrammelled by the harsh restriction of facts. In his last published book ‘The Kalahari and its Native Races’, published in 1929 shortly after his death, he suggests that Hottentot modulations of speech are derived from Chinese and eventually even convinces himself that the race itself is Asiatic in origin. And he felt that the Makalaka people were descendants of Malays who had sailed across the Indian Ocean. As his gravestone shows he was (and remains) most well known for his proposed Kalahari irrigation scheme first proposed in a newspaper in 1918, then in a scientific  paper ‘The dessication of Africa: The cause and the remedy’ and finally in a full length book ‘The Kalahari or Thirstland Redemption’ published in 1920. Schwarz said that large permanent lakes that had existed at Etosha Pan, the Makgadikgadi Pans and Lake Ngami and which had dried up  during the last few centuries. The loss of these lakes, he claimed, decreased rainfall over the Kalahari basin from about 1860 onwards. He was sure that restoring the lakes by damning  the Kunene River and  Chobe Rivers would increase rainfall by up to 250 mm a year and turn the desert into a green savannah.  The proposal aroused such popular support that the South African government launched a scientific expedition in 1925 to survey the Kalahari and to report on the possibility of practically implementing the scheme.  The official report alleged that Schwarz had many of his key facts wrong and that there was little or no chance of the scheme working. Schwarz continued to argue that he was right and after his death his widow continued to publish articles on the now discredited scheme. In 1927 he  visited Senegal on six month's leave to study the upper drainage system of the Niger River. He was not able to complete his survey and  so returned the following year, dying in the old colonial town of St Louis of a heart attack before he begin his work again. On his table was a letter to the editor of the Geographical Journal which outlined a solution to the problem of the route followed by Hanno the Carthaginian along the Senegal coast in his famous 5th century BC African expedition.  Schwarz’s body was returned to England for burial and Willesden chosen by his widow to be his final resting place. Probate lists is estate as being worth £1162 12s 8d, the sole beneficiary being his Daisy Murray Bowne Schwarz, widow, of 4 Burgess Park Mansions, West Hampstead.
Posted by David Bingham at 09:02