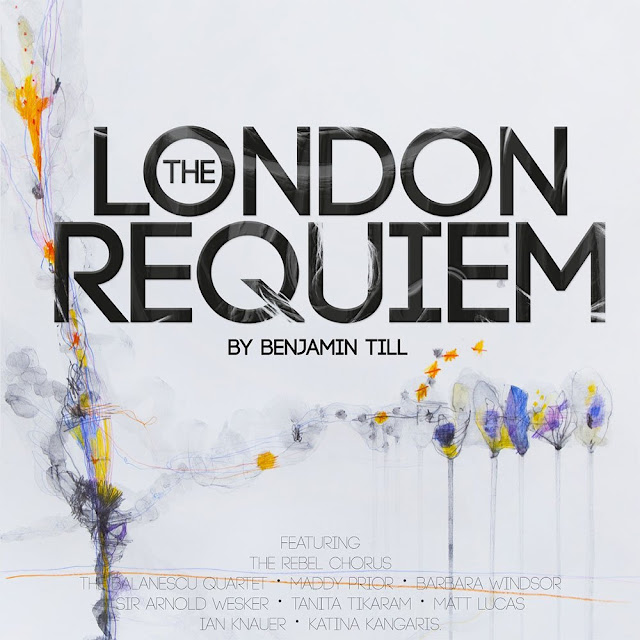 ‘I was struck by the simplicity of so many gravestones and how they are dominated by clichés. Then I thought about the difficulty of expressing all the love and emotion those inscriptions try to summarise. The epitaphs are the ultimate tweet – just a few words to sum up the feeling of an entire life.’
Benjamin Till

Composer Benjamin Till is the current John Cage Memorial Random Composer Award holder, which sounds impressive until you realise that the award is exactly what it says it is, randomly awarded, by chance, once a year with the only qualifying criteria being that the lucky winner drawn out of the hat “must be a real person...  If the winner is found to be sufficiently inhuman, a second winner will be selected.” Prestigious as the random John Cage Memorial Award undoubtedly is, Till is probably better known for “Our Gay Wedding: the musical” a programme for Channel 4 in which he turned his marriage, (on March 29 2014, the first day gay marriage become legal in the UK) to long term partner Nathan Taylor, into a musical featuring a duet from the two groom’s mums, a ballad version of ‘A Little Respect’ by Andy Bell from Erasure, a singing Jon Snow, and narration from Stephen Fry. The ceremony was held and filmed in the neglected Alexandria Palace Theatre. The Guardian’s Review said “as a musical, Our Gay Wedding wasn't perfect, but as a wedding it was better than perfect. It was fabulous.” The programme was nominated for a BAFTA and a Rose D’Or and won a Prix Italia and a Grierson award for most Entertaining Documentary.

As well as weddings Till has funeral’s on his CV. The London Requiem was premiered on the 29thh September 2012 at the derelict chapel in Abney Park Cemetery, North London. Like “Our Gay Wedding” the London Requiem features a number of unexpected celebrity appearances including Matt Lucas, Tanita Tikaram, Maddy Prior (of Steeleye Span), Sir Arnold Wesker (with whom Till has previously collaborated several times) and Barbara Windsor. The latter in particular was thrilled to take part as she explained to the BBC; "When you get to my age, I'm 74 and I've experienced a hell of a lot, you don't get many firsts.  Well, I've sung in a requiem. Even the word is daft for Barbara Windsor to be saying.” Added to the Latin of the traditional requiem mass are sung epitaphs culled from a trawl of 20,000 headstones across London’s cemeteries. Till himself remarked how dominated by cliché epitaphs are but his musical settings breathe new emotional life into oft repeated sentiments. The recording features a choir, multiple solo singers (some professional, some not), the Balanescu Quartet, and a number of other musicians playing the modern classical piece. Introit begins with the sound of traffic and Big Ben tolling midnight to establish the requiem's London credentials, soon joined by the choir of the Rebel Chorus and swelling strings raising the question “for what is death?” I am not really sure what I expected from a modern classical piece from the holder of a John Cage award; I think I was half prepared for discords, dissonance and disharmony but the Requiem is a long way from being a cacophony. I love every single track on the CD and find the music incredibly moving, so much so that the first time I listened to it I found tears welling up in my eyes a couple of times. Other parts send the odd shiver or two down my spine. It is almost impossible to pick favourites in such a well integrated composition but if I had to pick something to play on Desert Island Discs I think I would be torn between Pie Jesu and In Paradisum.

The London Requiem is available on itunes and excerpts from the premiere at Abney Park can be watched on YouTube. But if you like your music delivered physically rather than virtually the CD is no longer available on Amazon and you will have to send a cheque for £14.00 to Mr Till himself as he seems to be now the sole supplier. Who knows how many, or how few, CD's he has left stored in the spare bedroom; if you don’t buy now you may miss your chance forever to own a copy of this sublime piece of music.