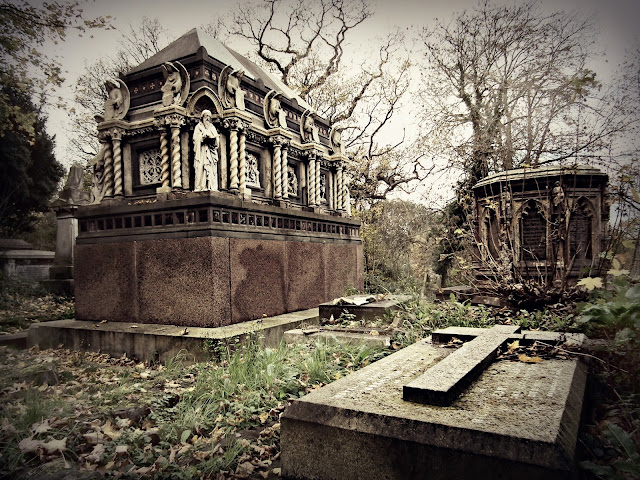 According to census returns and on his naturalisation papers Otto Alexander Berens was a native of Russia. Other sources say he was from Prussia. Burial records give his age as 63 in the undisputed year of his death, 1860, which would mean he was born in 1797. In the 1851 census he claimed to be 49, shaving almost five years off his real age but we know he liked younger women and in early middle age he was probably reluctant to own up that he was in his fifties and ageing rapidly. We don’t know when Otto came to England but by 1827 Otto was already a respectable merchant. We know this from newspaper reports  in November of that year which recount how he was robbed by James Campbell and George Lewis, two “well dressed young men” according to the Morning Advertiser who almost succeeded is cheating him out of £171 15s 9d worth of stock. The newspaper reports that for some reason Otto told the court at the Guildhall that he was a Frenchman (neither a Prussian nor a Russian?) who ran a French Fancy warehouse in St Paul’s Churchyard. James Campbell had approached him in the shop and presented him with the card of a respectable and well known warehouse and claimed to be a travelling buyer who wished to buy stock for the company for cash. He then chose goods to the value of just under £172 (an absolute fortune at the time, more than enough to buy a house) and asked for them to be packed up by the next day. The following day he returned and asked for the goods to be taken to the Swan-with-two-necks, a public house in Lad Lane, where he would pay for them.  At the public house they waited for Campbell’s partner to appear with the money but instead a letter was delivered by the two penny post to Campbell. He showed the letter to Otto – the missive from Campbell’s partner begged him to come to Tom’s Coffee House in Cornhill at 7pm prompt where the cash was to be delivered.   Campbell apologised to Otto for the inconvenience and set off immediately for Cornhill. Otto went back to his warehouse in St Paul’s Churchyard leaving his large box of valuable goods with a clerk in the public house. Needless to say when he returned at 8.00pm to collect his cash there was no sign of Campbell and his box French Fancies had disappeared. The clerk told Otto that almost as soon as he had left Campbell had returned to the pub and claimed the box. Luckily for Otto the case had been so heavy a coachman had refused to carry it and the clerk had been asked to assist by procuring a porter with a waggon and drays. The clerk had heard Campbell give the address in Lambeth the box was to be delivered to, to the porter. Otto made his way there, collecting two police officers from the Surrey New Road on the way. Campbell and his accomplice were caught red handed in he act of unpacking the box in their lodgings. Alderman Smith, who was hearing the case, told Otto that he “might think himself a most fortunate man ever to have seen his goods again.” It was indeed, the Morning Advertiser pointed out, a very narrow escape. 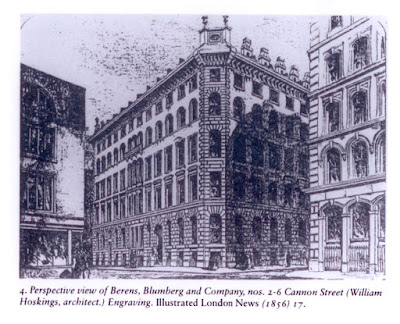 Otto went into business with another German (if he was indeed Prussian, not Russian, nor French), Ludwig Blumberg and the firm of Berens, Blumberg and Company moved into impressive premises at 2-6 Cannon Street in the early 1850’s. Just before they moved premises Berens and Blumberg were the victims of another robbery, this time by an employee, 30 year James Pope, yet another “respectable-looking young man” according the newspaper reports. James had been helping himself to stock, quite possibly for some time, and disposing of it to Adolph Hirshfield, a dealer in clocks and jewellery in Bishopsgate.   Otto was suspicious of Pope and when some clocks went missing he sent one of his clerks around to Bishiopsgate to check Hirshfield’s shop. When the clerk reported back that the clocks were there Pope and Hirshfield were arrested and sent for trial at the Old Bailey.  The newspaper reports concentrate on the stolen clocks but the trial records show that Pope had not confined his thieving to timepieces. Samuel Wood, one of Otto’s managers, told the court how he had accompanied Pope to his home in Shrubland Road, Dalston, where there was a veritable Aladdin’s cave of stolen goods;   a clock, two groups of alabaster figures, shades, and stands, a bronze group, three or four pair of glass vases, five glass candlesticks, a china box, a cigar ash tray, one pair of lava vases, three paste pots, and two pair of glass toilet bottles. Many other items had already been disposed of but the repentant Pope made out a full list of everything he had stolen from his employers in the 18 months he had been with them.  At the trial Pope pleaded guilty and Hirshfield was acquitted of receiving stolen goods as there was no evidence that he had any idea that the 11 clocks he had bought from Pope were  not his own property. 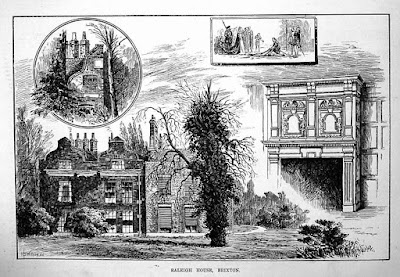 Otto had a tangled private life. In 1828 he had made a young woman called Fanny Esser pregnant. She had a son by Otto in January 1829 who was baptised John Samuel Berens at St Mary Magdalen, Old Fish Street  on 24 January (though this was recorded in the parish records of St Gregory by St Paul’s, a church which had been destroyed in the Great Fire of 1666 but which continued a sort of virtual existence as a parish operating out of St Mary Magdalen until that church was also gutted in a fire, which spread from a neighbouring warehouse and destroyed its roof in 1886). There is no evidence that Otto and Fanny were ever married even though Otto gave her name as Fanny Berens to the parish clerk when Samuel was baptised. How long he remained with Fanny is not known but it was not long because in 1832 Otto married 19 year old Charlotte Busby, the daughter of a farmer from Bicester in Oxfordshire. The marriage took place at St Mary Magdalen, Old Fish Street, and was recorded in the parish records of St Gregory by St Paul’s by the same clerk who had recorded the baptism of his son. It was also quite possibly the same vicar who performed both ceremonies, no doubt with raised eyebrows. Perhaps Otto felt uncomfortable living in the same area with his new wife as his mistress and young son.  In the 1841 census the Berens’ were recorded as living in the Paragon at Ramsgate.   The couple had one son, Alexander Augustus Berens who was born on 1st Nov 1843, was baptised at St Marks Kennington and probably never knew he had a younger brother.   In the late 1840’s the family moved to their final home, Raleigh House on Brixton Hill. In 1855 Charlotte’s father died in the Oxfordshire County lunatic asylum. Charlotte may have had her own mental health issues and perhaps took to drink; she died of cirrhosis of the liver in January 1857 at the age of 44. 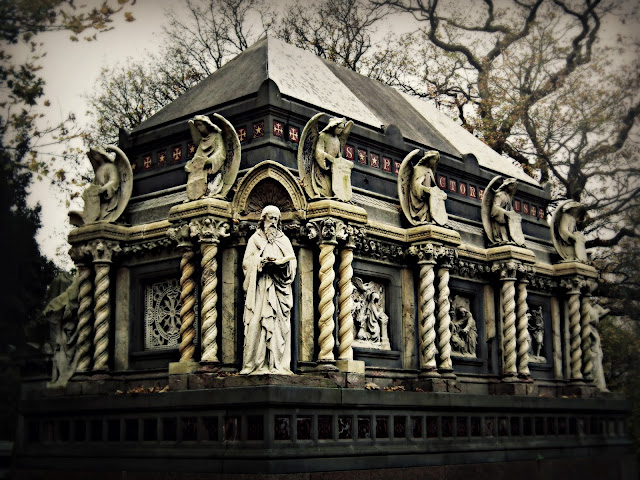 In his excellent book “The Art of Memory: Sculpture in the Cemeteries of London”, Richard Barnes says that Otto “commissioned and completed his own memorial two years before his own death”, but it seems unlikely that a man given to lying about his age was thinking about or preparing for his own imminent death. He may well have always intended to join her there, eventually, but the spectacular mausoleum in West Norwood Cemetery was surely created for Charlotte?  There is other evidence that the 61 year old merchant was fully focussed on living following Charlotte’s death. In September the following year he married again, a woman half his age, the 30 year old Louisa Cooke at St Matthews, Brixton. It was not destined to be a long marriage; barely 18 months later Otto was dead, on the 15th April 1862, “after six weeks acute suffering from spinal disease” according to the Morning Post.  The final resting place he created for himself and Charlotte is spectacular; the architect was Edward Middleton Barry, the son Charles Barry (who designed Parliament), and the sculptor who created the marble columns, angels and figures of the four evangelists which stand at each corner was Thomas Earp. The pair had previously worked together to create the Eleanor Cross which stands on the Strand in front of Charing Cross Station.  Historic England’s Official Listing describes the mausoleum:

Chest tomb on tall plinth above a vault. c1858 by E.M. Barry; sculptures by Thomas Earp. Pink granite plinth, marble superstructure and Portland stone sculpture. Medieval Italian style. Rectangular stone base on which the battered pink marble plinth with a top frieze of Minton tiles carrying the letter B for Berens and a bear, in punning reference to his name; doorway on western elevation now bricked up but originally with bronze doors manufactured by Potter who also made surrounding cast iron railings, now gone. Free-standing, paired barley sugar columns surround the chest and support a foliated cornice; above each pair, a sculptured kneeling angel holding a shield. At the angles the cornice rises up to form pointed arch aedicules for figures of the 4 evangelists. Between the columns, panels carved in deep relief showing scenes from the life of Christ; eastern panel an open-work cross within a roundel. A further frieze of Minton tiles, including a Latin inscription, under the eaves cornice with antefixae. Hipped marble roof. All in a state of considerable decay. Berens was a linen draper of St. Paul's Churchyard who made a fortune in the "fancy trade; the tomb was said to have cost £1,500 and was illustrated in the Builder of November 1858. 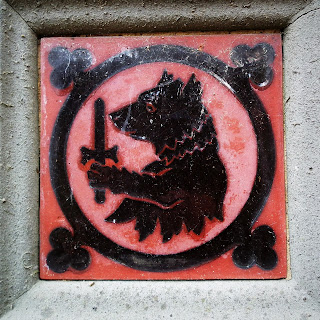 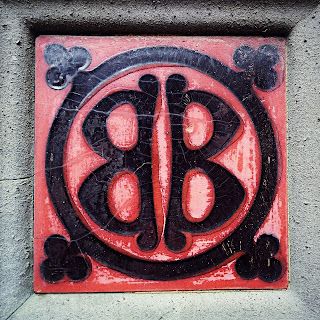 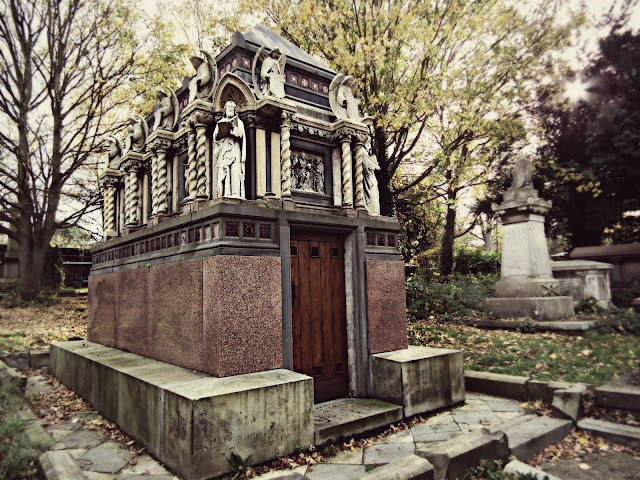 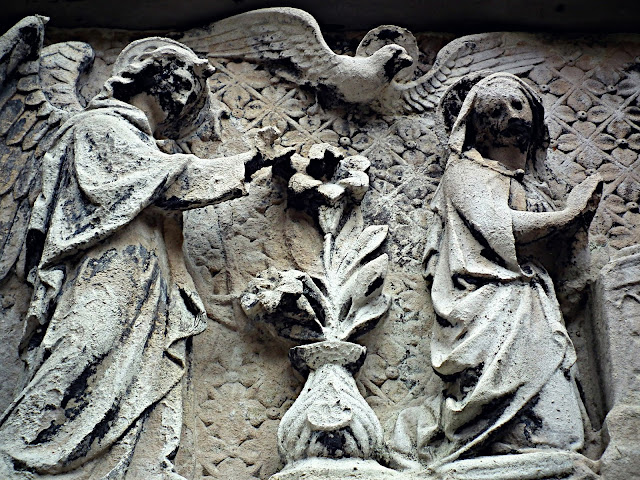 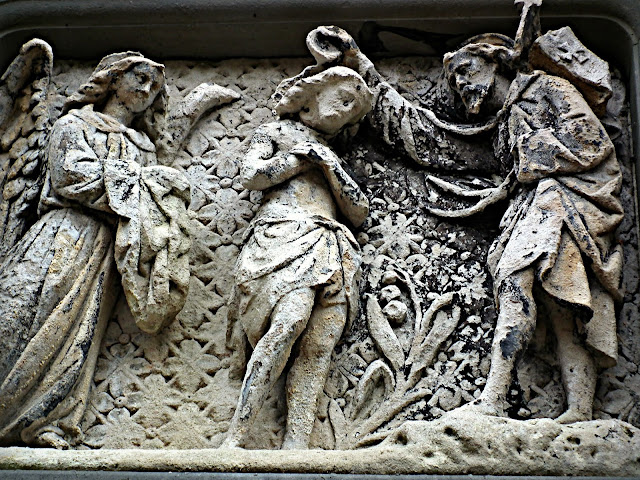 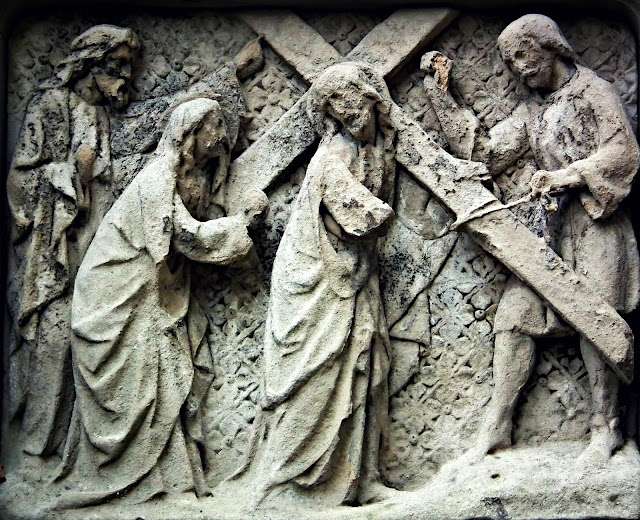