A want of honour in her own conduct led to this fatal catastrophe; Harriet Shelley (1795-1816) St Mary's, Paddington Green 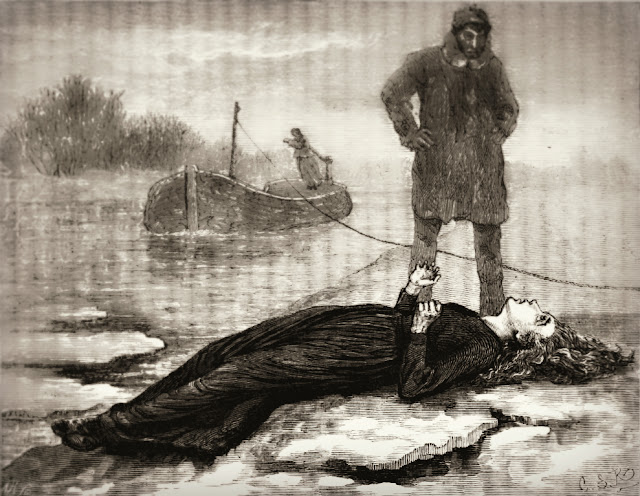 On the 13th December 1816 the corpse of a heavily pregnant 21 year old woman was quietly buried in the churchyard of St Mary’s Paddington Green. If there were any mourners they failed to tell the parish clerk that Harriett Smith, as she was listed in the burial register, was not the deceased’s real name. Her body had been pulled out of the Serpentine three days earlier and a hurried inquest convened at the Fox and Bull alehouse the morning after the grisly discovery.  The jury had heard from the dead woman’s landlady that she was of solitary habits, afflicted with melancholia and visibly in the family way. John Gell, the coroner, made a terse statement saying  ‘the said Harriet Smith had no marks of violence appearing on her body, but how or by what means she became dead, no evidence thereof does appear to the jurors.’ The jury came quickly to what was, under the circumstances (Harriett had clearly killed herself), the compassionate verdict of “found dead in the Serpentine River”.  The death was widely reported in the newspapers but perfunctorily, for the most part in a couple of sentences:  Tuesday a respectable female, far advanced in pregnancy, was taken out of the Serpentine River, and brought home to her residence, in Queen-street, Brompton, having been missing for six weeks. She had a valuable ring on her finger- (Cheltenham Chronicle, Thursday 19 December 1816). The Times added a few, coldly dismissive, details; A want of honour in her own conduct is supposed to have led to this fatal catastrophe, her husband being abroad.  Harriett’s husband, Percy Bysshe Shelley, was not abroad (though he had been recently in Geneva), he was in Bath when the news reached him of his wife’s death. He rushed back to London to begin a bitter legal battle for custody of his children.

Harriett Smith was born Harriet Westbrook in August 1795, the daughter of a tavern or coffee shop keeper, who sent his daughter to be educated at a boarding school in Clapham. One of her school friends was Hellen Shelley who introduced her to her older brother, Percy Bysshe Shelley. The poet swept the schoolgirl off her feet and in 1811, when he was 19 and she just 16, persuaded her to elope with him to Scotland where the couple married, to the consternation of both their families. The marriage did not last and seems, for the most part, not to have been happy.  The pair had their first child, Ianthe, in June 1813, by which time Shelley was spending as much time away from home as possible. The couple remarried in London in March 1814 dispel any doubts about the legality of their Scottish union. At the time of their remarriage the couple were more or less estranged but the ceremony brought about a temporary thaw in their relations, enough for Harriet to become pregnant again. Shelley’s description of the act of making love with Harriet made it clear the relationship was doomed; "I felt as if a dead and living body had been linked together in loathsome and horrible communion."   By July Shelley was gone for good, having eloped again, this time with Mary Godwin. There were no further reconciliations, temporary or otherwise.  Their second child, Charles, was born in November, and Harriet moved back to her parent’s house with her two young children where she stayed quietly for the best part of two years. In September 1816, leaving the children with their grandparents, she moved out to lodgings in Hans Place, Knightsbridge where rumour had that she took a Guards Officer from the Chelsea Barracks, a Major Ryan, as her lover. She disappeared on or around the 9th November and was not seen again until the morning of 10th December when John Levesley, a Chelsea Pensioner, who was making his way to Kensington across Hyde Park,  spotted her body floating on the waters of the Serpentine.

Before she killed herself who wrote a final letter to her older sister Eliza and to Shelley. To her sister she said: When you read this letter. I shall be no more an inhabitant of this miserable world. Do not regret the loss of one who could never be anything but a source of vexation & misery to you all belonging to me. Too wretched to exert myself lowered in the opinion of everyone, why should I drag on a miserable existence embittered by past recollections & not one ray of hope to rest on for the future? The remembrance of all your kindness which I have so unworthily repaid has often made my heart ache.   She pleaded with Shelley to leave Ianthe with her sister and suggested he contented himself with Charles, their infant son: My dear Bysshe let me conjure you by the remembrance of our days of happiness to grant my last wish – do not take your innocent child from Eliza who has been more than I have, who has watched over her with such unceasing care. Do not refuse my last request – I never could refuse you & if you had never left me I might have lived but as it is, I freely forgive you & may you enjoy that happiness which you have deprived me of. There is your beautiful boy. oh! be careful of him & his life may prove one day a rich reward...... My children I dare not trust myself there. They are too young to regret me & ye will be kind to them for their own sakes more than for mine. My parents do not regret me. I was unworthy your love & care. Be happy all of you. so shall my spirit find rest & forgiveness. God bless you all is the last prayer of the unfortunate   Harriet S–––

In the week before Christmas the weather turned colder and less than a fortnight after Harriet’s bedraggled body had been fished from the water of the Serpentine the river froze over. The London Courier and Evening Gazette of Monday 23 December 1816 described a very different scene in the Royal Park:


Yesterday the Canal in St. James’s Park, and the upper part the Serpentine in Hyde Park, was frozen sufficiently to afford a few boys an opportunity for skating. The margin of the ice was thronged with elegant female pedestrians, who dashed along in their winter fur pelisses and crimson morocco half boots, active as Scandinavian dames, or the buxom daughters of Russia. Their bloom of health was increased by the frosty air and the general appearance of the fair leaders of winter fashion enlivened the surrounding prospects of leafless branches, burdened with snow, and the dreary waste. Black velvet hats with steel buckles and feathers in front, were much worn. The pelisses in general were bordered with fur six inches deep, which appeared a good imitation of ermine. The boots were crimson, purple and Russia leather, laced in front with silk, and ornamented with fur of various sorts. Two or three of the boys on the canal broke the ice and fell in, but were taken out unhurt. 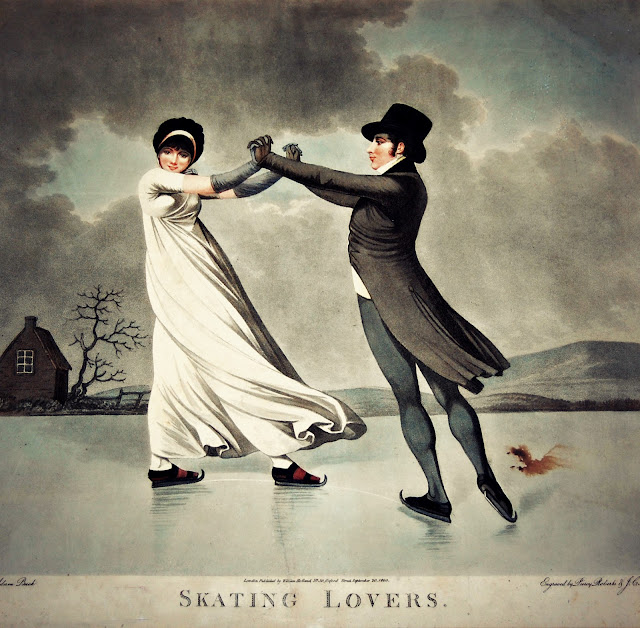