The comfortable Estate of Widowhood, is the only Hope that keeps up a Wife's Spirits; Auguste Kettner (1833-1877) Brompton Cemetery 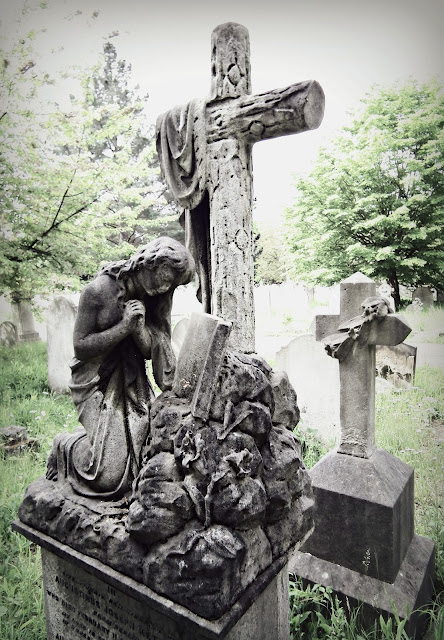 As soon as I saw the inscription on this memorial I knew that I am spending far too much time in cemeteries. Not only did I know immediately who Auguste Kettner was, I also knew exactly where his widow is buried – in fact from  here I could probably have walked to her grave blindfold (admittedly it is only a couple of hundred yards away).  The widow, Barbe Maria Theresa Sangiorgi, has one of Brompton Cemetery’s best known funerary monuments, but Kettner’s is completely obscure. I had no idea that he was even buried here and certainly no inkling that his grave was so close to hers.  I have never noticed the monument before because it is in a section that has been wildly overgrown for as long I have been visiting the cemetery. When I dropped by in March the undergrowth had been cleared away revealing, for the most part, dozens of uninteresting late Victorian grave stones with just two or three more elaborate memorials dotted amongst them of which Kettner’s bare breasted figure of grief is one.

I have written previously about Kettner and the Sangiorgi monument:

Barbe Maria Theresa Sangiorgi was the widow of Auguste Kettner a Frenchman who allegedly had been Napoleon III’s chef during the second empire (but before the Emperor was forced to live in exile in the suburbs of south-east London at Chislehurst).   In 1867 Kettner opened a modest restaurant in what was then Church Street (now Romilly Street) in Soho.  According to Nathaniel Newnham-Davis in his “Gourmet’s Guide to London” (1914), it “was the first small restaurant that dared to show its kitchen to all comers at a time when the kitchens of most foreign restaurants were places of horror.” The restaurant was discovered and publicised by a correspondent of The Times and became successful enough for Kettner to expand by leasing 3 neighbouring properties and knocking down party walls to create a large public dining area and converting the upstairs into private dining rooms.  “In 1877 two events of great importance to M. Kettner happened,” says Newnham-Davis, “he wrote his ‘Book of the Table’ and he died….”  Kettner’s ‘Book of the Table’ was in fact written by the journalist Eneas Sweetland Dallas with Kettner’s name used as a marketing device.  The name of the restaurant was so established that there was no question of changing it following Kettner’s death; in fact it is still open today, at the same address under the same name.

I now know that I had some of my facts wrong. Kettner (full name Auguste Charles Edouard Kettner) was not French, he was German, born in Berlin in 1833. His father,  Augustinus Joseph Kettner, a printer, died in London  in 1872 presumably after being brought here by his son from Berlin where he may well have been living alone as the inscription says Kettner was his only child and we know his wife died in Berlin in 1850. In fact this is really the father’s memorial; Kettner’s widow buried him here in 1877, the son only outlasting the father by five years.  Barbe Marie Therese Dubois was born in Belgium in April 1833 and met Kettner in Paris where he was a chef and she a chambermaid. They married in 1861. There is no evidence that Kettner ever worked for Napoleon III. In the normal course of events Barbe may well have joined her husband and father-in-law in their vault when she died in 1893 at the age of sixty. But in 1880 at the age of 46 she had remarried to the 31 year old Giovanni Sangiorgi, an Italian who may well have been an employee before he married the boss’s widow. His flair for business transformed Kettner’s into one of London’s more famous and successful restaurants and the couple were very wealthy when Barbe died. Rather than inter her with Kettner, Giovanni bought an expensive plot in a good part of the cemetery near the main gates and erected a very elaborate and very Italian memorial in her memory. Barbe rests there alone as when Giovanni died in 1909 he chose to have his body shipped to Lugano and be buried with his ancestors. She might have been less lonely if she had been allowed to join her ex husband. 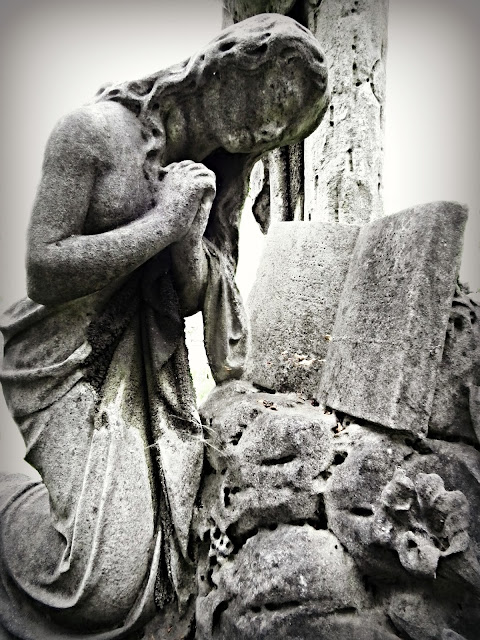