The Art of Memory; Sculpture in the Cemeteries of London by Richard Barnes (Frontier Publishing £44) 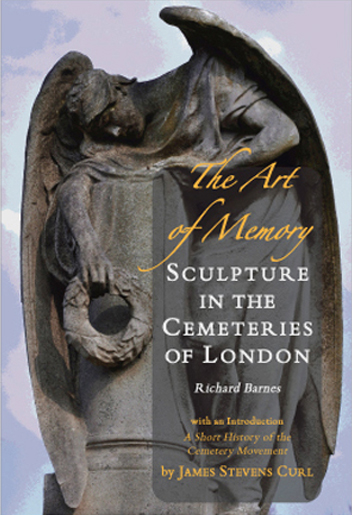 Subscription publishing is making a comeback. I found out about this book from a flyer in the Kensal Green and Brompton Cemeteries Friends newsletters. I would have been tempted to buy it anyway but pre-publication subscribers were offered further inducements in the form of a 25% discount on the rather steep cover price of £44 and the promise of finding their name printed inside the book on a subscriber list. I thought the practice had died out in the 19th century but apparently it has been revived in the last few years. You can see the attraction – books about cemeteries are unlikely to make any best seller lists and if you are going to risk putting out a heavily illustrated, all colour, low print run, high cost opus on a subject of minority interest it isn’t a bad idea to know that you have a minimal number of punters willing to pay for a copy. For a cover price of £44 I was expecting, naively perhaps, a hardback but this is a paperback. Books used to come unbound; I could look for a bookbinder I suppose.

Richard Barnes’ book features 102 memorials from London cemeteries and churchyards, listed in chronological order starting with William Hogarth in Chiswick (c1764) and finishing with Bryan Gould in Highgate (2011). The memorials are all chosen for their sculptural interest and include virtually all of London’s best known tombs from Karl Marx in Highgate to Thomas Joseph Tate in Finchley, Martha Gall Bianchi in Hampstead, Sir Richard Burton in Mortlake to Bonomi and Courtoy  in Brompton.  New to me were all the Brookwood memorials as I have yet to make it to Woking; Richard Barnes has made me realise what I am missing and I will make sure I get out there this year. Almost everything else was very familiar to me but there were a couple I have never heard of – Margaret Bunzl’s Magic Flute influenced grave in Chislehurst and the Lucena memorial in Enfield. In general it’s hard to argue with Barnes’ choice of memorials, personally I would have gone for Joyce McQueen’s memorial in Manor Park over Bryan Gould’s and I have a soft spot for the Vassallo memorial in Plaistow and would have loved to have seen it featured. But almost everything of sculptural importance, interest or beauty in London’s cemeteries is here. Every memorial is illustrated and the well written and informative text not only gives details of the artist who created it (where known) but also has brief but often fascinating biographical details for the owner.  James Steven Curl (author of ‘The Victorian Celebration of Death’) provides an excellent essay on the history of the cemetery movement as an introduction.


The photographs in the book are almost all by Charles Slade, better known as Stiffleaf on ipernity and flickr). They are of a uniformly high standard and many of them are stunningly beautiful; they are a vital contribution to the success of this book and I can’t help feeling that the photographer merited at least a mention somewhere on the cover. I absolutely love this book and if you can afford it and have even a passing interest in the subject I would highly recommend it.