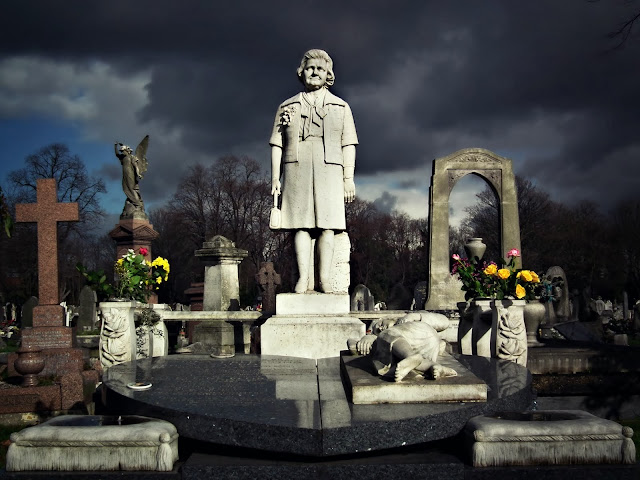 After two years as the London Dead's header photograph I decided, after much agonising, to retire Sinjura Vassallo. Her memorial, in the East London Cemetery in Plaistow is, as photographer Stiffleaf says "as kitch (sic) as a Jeff Koons." The New Yorker's kitsch is of course all post modern irony, while the Rayford Memorial Co Ltd's (now in Ilford, formerly in Stratford) is innocent and authentic. It is one of London's best modern monuments; there is a general rule of thumb that says if a monument is interesting then so the person buried there. In the case of Mrs Vassallo this is impossible to verify as I have not been able to find out anything whatsoever about her. The life of this presumably Maltese matriarch is so obscure that I have not been able to uncover even a single fact about her life. There are quite a few Vassallo's in East London and we can assume that this is perhaps the founder of the current dynasty. She was probably born in Malta but came to the UK when, the 1950's? Her stiff, formal pose, clearly culled from a wedding photograph, gives little of her character away. But to her family she was clearly supremely important. In these egalitarian days even the rich and famous settle for unostentatious grave stones of standard size and shape, maybe allowing themselves a slightly classier epitaph but otherwise trying really hard not to stand out from the crowd. Sinjura Vassallo's family didn't let the modern democratic spirit inhibit them - they went in for something as big and bold as any bourgeois nineteenth century golden age memorial. Good for them; if only more people would follow their example we might still be creating cemeteries that future generations would like to see.

Much as I love the Vassallo memorial I thought two years featuring as the header to the blog is more than enough and it is time for a change. Once I had replaced her I realised that I don't have the photograph (which I also love, even though I took it) anywhere else on the blog. Hence this post. As well as the eye catching statue of Mrs Vassallo the memorial also features the figure of a young girl presumably personifying grief. The skill of the sculptor is immediately obvious in the rather stiff pose of the deceased but it is clear to see in this depiction of mourning. There also flower vases decorated with reliefs of roses (all of which were filled with flowers when I was there) and sculptured cushions. 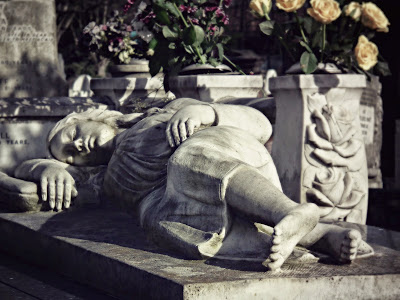 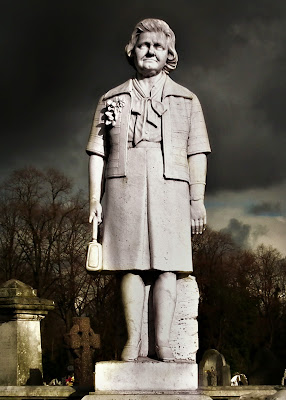 To replace Sinjura Vassallo I chose another Mediterranean lady, this time a French (though married to an Italian), Signora Barbe Maria Theresa Sangiorgi whose memorial in Brompton Cemetery is justly famous. You can read her story here. 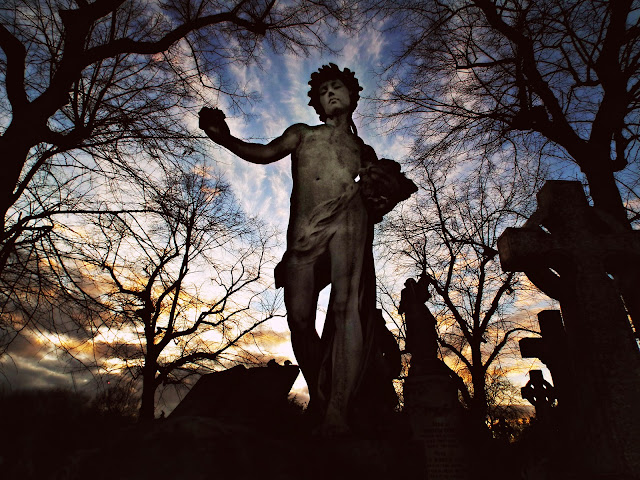