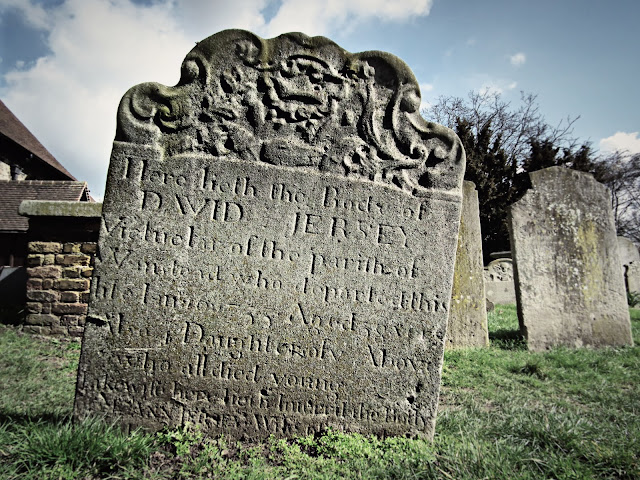 Here lieth the body of
David Jersey
Victualler of the Parish of
Wanstead who departed this
life 1 May 1755 Aged 68 years.
Also 4 Daughters of above
who all died young
Likewise here lieth beneath the body
of Ann Jersey, wife of the above
29 nine year old David Jersey of East Ham married Anne Garrin of Barking at St Stephens, Coleman Street in the City of London on 6 July 1721. David Jersey, victualler, was the landlord of the George and Dragon in Wanstead, a coaching Inn originally built in 1716 and serving as a staging post between the daily coach from Aldgate and the Essex coaches. Apart from what is recorded on his epitaph and in the marriage register at St Stephens we know very little about him. As sell as the four daughters who died young he also had a son William, who was baptised at St Mary Magdalene's in East Ham on 7 March 1730 and was buried there on 17 June of the same year. His daughters were called Esther, there were two Ann's, the first dying in 1723 and her sister and namesake being born the following year and then dying at the age of 7 in  1731, and a Mary.

One intriguing remnant of his life still remains in Wanstead. The coaching inn was demolished in 1903 and a new pub built on the site (now a Weatherspoons) and the name shortened to the George. Nothing remains of the old Inn except an old inscribed stone dated 1752 which was rescued and set into the wall of the new building. The stone is a memorial to a cherry pie that cost half a guinea (10s6d) on the 17 July “that day we had good cheer/ I hope to so do maney a Year.” The lettering on the stone has been touched up over the years and as a result the name Jersey has gradually lost the final e and the issue has grown to increasingly resemble the r standing next to it. To the uninitiated the surname now looks more like Jerry or Terry than Jersey. An illustration from 1906 in 'The Old Inns of England' by Charles Harper confirms that the name was once clearly legible as D. Jersey. Local legend has it that the stone commemorates a cherry pie stolen by a local workman who was fined half a guinea for his crime. As the minimum sentence for stealing a pie in 1752 was hanging or lifetime transportation to Van Diemen’s Land the story seems unlikely to be true. Another theory is that it may commemorate a monster pie festival similar to the Tollesbury Gooseberry Pie festival – Wanstead was famous for its cherry orchards in the eighteenth century.  But no one really knows why David Jersey wanted to immortalise a very expensive Cherry Pie.