On Tuesday the 4th January 1892 the 60 year shipping magnate Frederick Richards Leyland was travelling on the Metropolitan Line with Colonel Robert Rainsford Jackson, the managing director of the National Telephone Company (of which Leyland was also president).. Within a few minutes of entering a first class carriage in Cannon Street Leyland was gasping for air and clutching his chest. At Mansion House station Colonel Jackson summoned the train’s guard for help. At Blackfriars the train was held in the platform whilst the Station Inspector, who suspected that Leyland was already dead, called for a stretcher and had him removed from his carriage and put in his office. A doctor was sent for who arrived at 5.15pm and confirmed the Inspectors suspicions, Leyland had died of a heart attack. An inquest was held on 7 January (“death by natural causes” the verdict) and the funeral at Brompton took place next day, on the Friday morning.

The son of a bookkeeper from Liverpool, Leyland started work at the age of 13 in 1844 as an apprentice at the city’s oldest independent shipping line, John Bibby and Sons. He rose steadily in the company becoming a merchant in the firm in 1859, a partner n 1861 and finally, in 1871, the owner when he bought out his employers and renamed the company the Leyland Line.  Leyland’s real passions were art and women. He was a notable patron of the pre-Raphaelites especially Rossetti and Burne Jones (who designed his tomb) and had a close relationship and spectacular falling out with James McNeill Whistler.

Leyland bought a mansion 49 Princes Gate in Knightsbridge in 1874 and brought in architects Thomas Jeckyll and Richard Norman Shaw to remodel the interior of the house to create a suitably opulent setting for his collection of paintings and objets d’art. Whistler, whom Leyland had been patronising for several years, became involved when Leyland asked him to design the colour scheme of the hall and stairway and then was foolish enough to ask for his opinion on Jeckyll’s scheme for the dining room. Here, along with his collection of blue and white Chinese porcelain, Leyland intended to hang Whistler’s painting La Princesse du pays de la porcelain. To display the china Jeckyll had designed  a range of open shelves in the Japanese fashion, completely covered the walls with 16th century gilt leather hangings painted with red flowers and green foliage (once owned by Anne Boleyn, the antique leather alone cost Leyland £1000),and created a Tudoresque wood and canvas ceiling. The room was constructed by a local builder who fitted it into the existing room on a framework which meant that the whole thing could be dismantled and removed.


In April 1876 Leyland, who was staying in Liverpool for an extended spell while the works on the new house were completed, asked Whistler for suggestions for the colour scheme for the almost finished dining room. As a result of this prompting Whistler began a series of adjustments to Jeckyll’s colour scheme, calling in two of his Chelsea chums, the former boatmen turned artists Walter and Henry Greaves, and setting them to work retouching the existing paintwork. As the work progressed Whistler grew more dissatisfied with the results and more ambitious in the scope of the changes he wanted. Jeckyll fortuitously fell ill and with Leyland still in Liverpool and the two Greaves brothers to help him there was nothing to stop Whistler completely altering the look of the room. By August he was telling Leyland that the room was all but finished apart from a ‘blue wave’ pattern he wanted to apply to the cornice and dado. The blue wave transformed itself into peacock feathers and spread across the vastly expensive antique gilt leather until the whole room had been painted cobalt blue with a design of golden peacocks. Walter Greaves warned Whistler that the blue paint they used discoloured very quickly after drying. Walter had had to rename one of his paintings of a girl in a blue dress, “Girl in a green dress” after experimenting with the same pigment. Whistler didn’t listen and today the Peacock Room is no longer the intended colour but a sort of verdigris. The artist was hugely proud of the completed room, so proud that he invited numerous friends around to Leyland’s unoccupied house and held impromptu parties to show it off, even inviting the press. Frances Leyland dropped in unexpectedly one afternoon to find dozens of people milling around her house and Whistler holding court in the Peacock Room where he dismissed a question from his audience about what his patron thought by saying what did the opinion of a ‘parvenu’ matter?

Leyland apparently was not enthralled either by the room or Whistler’s attitude especially when the painter presented him with a bill for two thousand guineas for work that he had neither requested nor wanted. After seeking the opinion of Rossetti Leyland responded by offering Whistler a cheque for £1000, a calculated snub because the amount offered was too large for the hard up painter to refuse but the payment was in tradesmen’s pounds and not artist’s guineas. Whistler retaliated with a final bit of work on the room, a mural of two peacocks, the bird on the right representing Leyland standing over a scattering of silver discs, the shillings deducted from Whistler’s fee, whilst the other bird, representing Whistler, calm and dignified walks away. Frances Leyland further inflamed the situation between the two men by apparently taking Whistler’s side and allowing herself to be seen in public with the artist in situations which gave rise to scandalous gossip. Leyland wrote to Whistler on more than one occasion warning him to stay away from his wife and family. In a letter dated 17 July 1877, Leyland wrote "I am told that on Friday last you were seen walking about with my wife at Lord's Cricket Ground. After my previous letter to you on the subject, it is clear that I cannot expect from you the ordinary conduct of a Gentleman; and I therefore now tell you that if after this intimation I find you in her society again, I will publicly horsewhip you."

Leyland’s £1000 cheque did little to stave off Whistler’s rapidly approaching financial crisis. By late 1878 the artist could no longer satisfy his creditors (one of the principal one’s being Frederick Leyland, who may have gone out of his way to buy Whistler’s debts with the intention of ruining him) and was declared bankrupt. Whistler reacted by painting ‘The Gold Scab: Eruption in Frilthy Lucre” which shows Leyland in the old familiar guise of a peacock seated upon Whistler’s Chelsea house. It ridicules his miserliness, his frilly shirts (hence the apparently misspelled title) and his piano playing skills (of which he was presumably proud).  In 1879 Leyland’s wife Frances (who is buried with him at Brompton), finally tired of her husband’s philandering and forced him to accept a formal separation.  Leyland went on to have a son with a married mistress Rose Caldecott. The boy was registered as Frederick Richards Leyland Caldecott – Rose’s husband apparently either very forgiving or very stupid. By the following year the first of his son’s by another mistress, Anne Wooster, was born in Kent. The couple went on to have another child and to set up house together in Broadstairs. 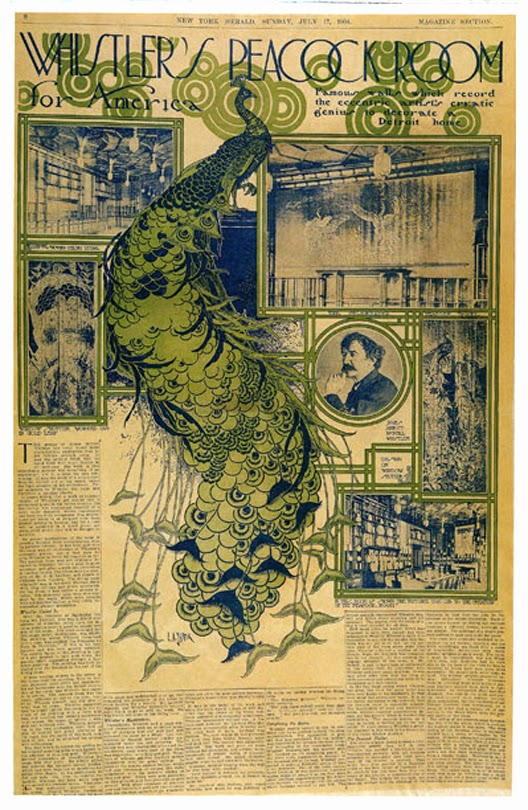 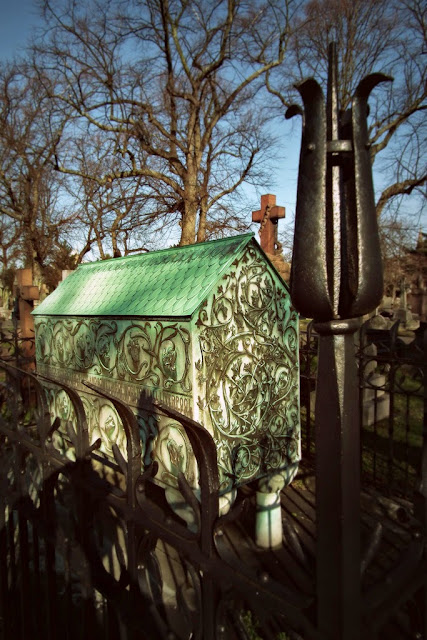