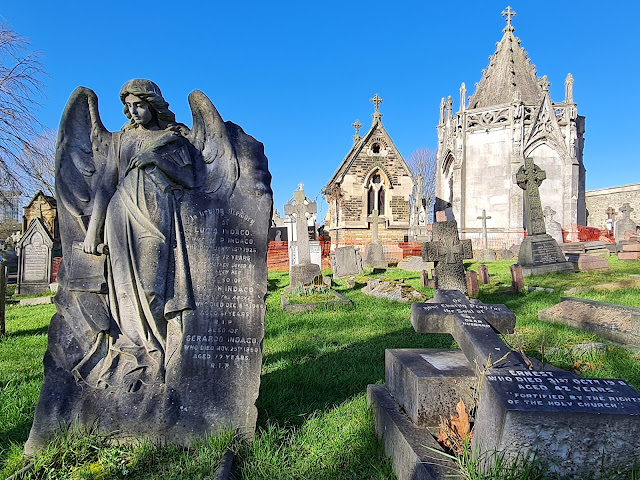 The weather was beautiful last weekend in London; clear air, cloudless blue skies and winter sunshine. Just a week before storm Eunice had been knocking over trees and ripping tiles from roofs and then we had had a couple of days of rain. Some areas of the catholic cemetery at Kensal Green were completely waterlogged; some graves were only accessible by skiff as you can see in the photo below.  Not for the first time it seems; this is from the Willesden Chronicle of Friday 03 May 1895.

Kensal Green Catholic Cemetery — A contemporary states that a number newly made graves in this part of the great cemetery at Kensal Green were suddenly flooded in the heavy storm on Saturday. As many as eight bodies had to be left in the church through the night and much distress was occasioned among mourners who had to leave the cemetery without the completion of the funerals. 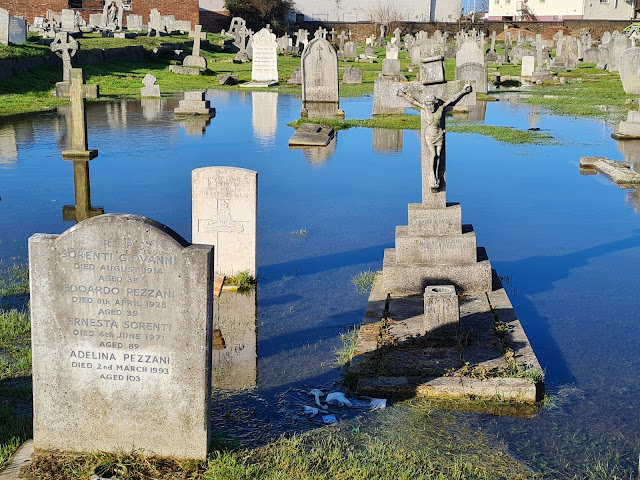 I came across an interesting account of a visit to St Mary’s in the Saturday Supplement to the Daily Herald of 16 October 1915. The left leaning Herald was published in London between 1912 and 1964 (though printed in Manchester from 1930) and was a staunch supporter of the labour movement and the Labour Party. It was a broadsheet newspaper and relaunched as the Sun in 1964 (it only became a tabloid in 1969 when taken over by Rupert Murdoch). The article, entitled ‘At Kensal Green’ was by James W. Butler; I can find out nothing about him at all. His language seems rather high flown for a journalist.

The dull canopied skies were lowering darkly upon the graves in St. Mary’s Cemetery, Kensal Green. October, with her grey, cold robes, chilled the blood in the veins. Leaves, dead and dying, with the dappled russet-gold of Nature’s mourning, strew the pathways and litter the decaying grass, or flitter for an instant on a headstone. Symbolical are they of the life that was in the spring; and the death near at hand.

In an almost obscure position, a few feet from the footpath, lies the plain white sarcophagus that covers the remains of the great Victorian poet, Francis Thompson, “a true poet, one of small band,” to quote George Meredith’s tribute, which was enclosed in the coffin, together with roses from Meredith’s Garden. No grandiloquent epitaph adorns the simply carved stone. Just as he who lies underneath would have wished it; “Meet me in the nurseries of Heaven.” 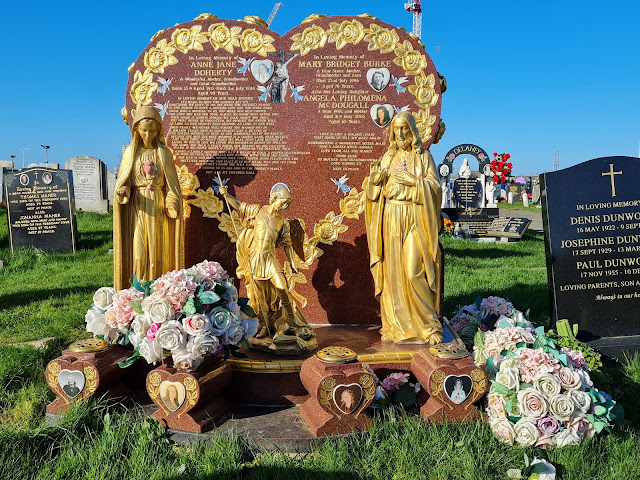 The sound of feet crunching the small stones into the ground catches my ear. Glancing round, I see approaching along the narrow winding path a pathetic little procession. A woman, really a girl, shabbily clad, obviously of the costermonger type, is sobbing herself almost to distraction. She is being held up by an anaemic-looking young fellow, wearing corduroy trousers, a cheap black cap, a cheaper black strip of cotton stuff knotted round his throat, and a tattered serge coat through which brazenly peep parts of his shirt. Close behind follow three puny slum children; tragedy written plainly on their ferret-like faces. They, too, wear black kerchiefs round their necks—their only sign of mourning; whilst several relations and friends straggle in the rear. Poverty is strongly portrayed, and throws its shadows across their faces and manifests itself in their scanty attire.

Arrived at the graveside, tears and emotion were strongly universal. The poor young mother’s lamentations rent the chill air. She is frantic, and it takes the united efforts of her friends to prevent her from throwing herself into the grave. The priest sprinkles the cheap white coffin with holy water. Two penny bunches of white chrysanthemums are reverently dropped on to the lid as the tiny box is lowered into the hole, and with the rites finished by the clergyman and his two surpliced servers proceed towards the church to meet another funeral. 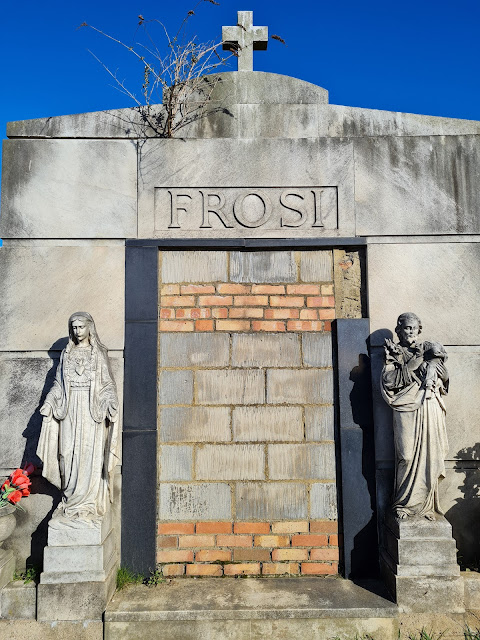 The small band of meanly-dressed mourners return to their one-horse coach. Eight try and crowd in; some have to walk back to Leather-lane. The ill-kempt children are waiting their turn. Quietly a two-shilling piece finds itself into one of the grimy little hands. But the movement has not escaped a lynx-eyed youth with a short leg.

“What’s the bloke giv’n yer? He greedily asks, leaning over the child and grasping her hand. He opens the fingers deftly and sees the spoils. Quickly he brings from his vest pocket a copper coin with which he rapidly rings the changes. other members are too grief-stricken to notice what has occurred… 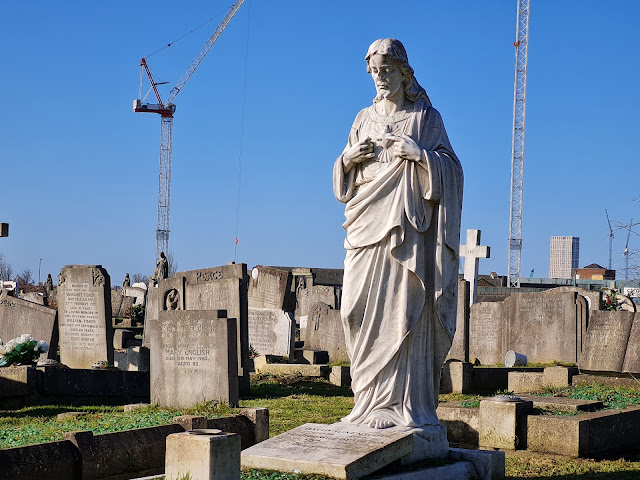 With purple stole and black biretta the priest is waiting near the small mausoleums and chapels, containing the remains of foreign princes, counts, and members of the Roman Catholic aristocracy. In the distance and coming up the small roadway from the main gate is a gorgeous funeral cortege. Four prancing Flemish horses draw a hearse surmounted with a tray of black nodding feathers. Bay horses, the insignia of gentility, are doing their best in the coaches to add dignity and grandeur to the occasion. Costly wreaths almost hide the beautifully-polished oak shell, and decorate the carriage lamps of every vehicle. 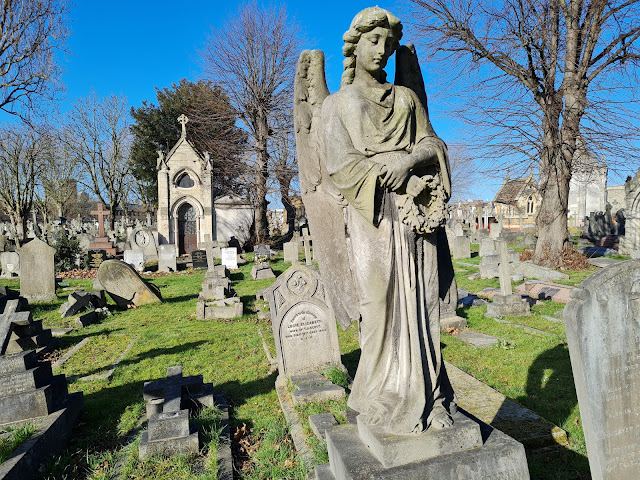 It is a lavish display of studied position and wealth. But the dead child is not disturbed. mourners bent double with grief alight from the coaches. They hold their heads aloft, with chins pointed towards Heaven. It is the demeanour of the dignity of grief. Children are conspicuous by their absence. It is the custom; it is proper; it is etiquette. The priest again leads the way to the grave — in another part of the burial ground.

“… My soul hath relied upon His word: my soul hath hoped in the Lord…” The noble antiphons of the dead are recited. A few slight sobs are heard as the coffin is lowered into its last resting-place; but faces are under control. There is no unseemly demonstration of weeping. With stately mien the mourners return to the luxurious coaches, upholstered with comfortable seats. 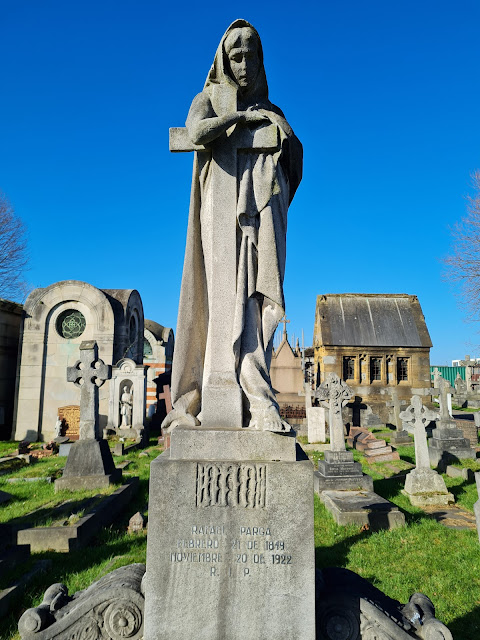 "Meet me in the nurseries of Heaven.” Thompson, a fervent lover of children. “The Heart of Childhood, so divine for me.” He loved the small wan flowers of life; the children of the poor; of the streets. He wrote of them even to the last.

The mists were creeping’ into Harrow-road as I boarded a tram for Westbourne Park Station. Some distance further along the sidewalk toiled the lame young fellow with two companions. They were walking into the doors of a coffee-shop when the tram drew abreast. Then, indeed, I felt almost glad that the two shillings had changed hands. 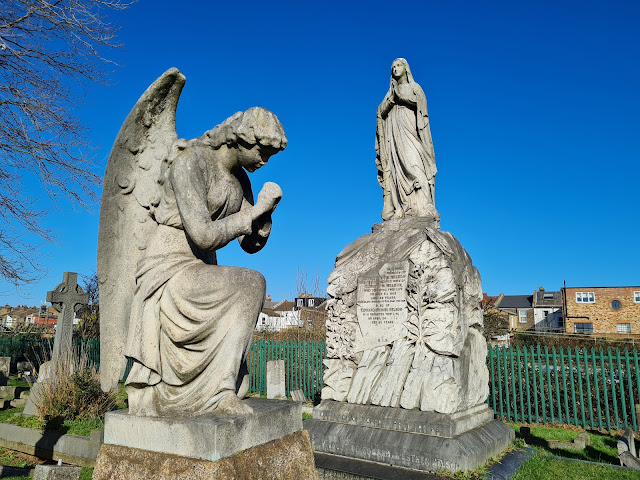