The Death of the King of the Beggars; Andrew Whiston (1770-1826) St Saviour's churchyard, Southwark

When Andrew Whiston, a renowned dwarf, died on Monday 3rd April 1826 the surgeons of Guy’s and St Thomas’ Hospitals offered £100 for his body.  Hearing of his death, and knowing that he had no relatives, the night constable of St Saviour’s parish called at his lodgings to claim the body but found his fellow lodgers unwilling to surrender the corpse. They claimed that Whiston had not paid his rent for a month and admitted that they planned to settle the debt by selling his cadaver to the surgeons. The night constable was having none of it; he took charge of the body and removed it to the watchhouse where he could keep an eye on it. As no relatives came to claim him Whiston was buried by the parish on April 7 in the churchyard of St Saviour’s (now Southwark Cathedral). To stop the body being claimed by resurrectionists the sexton dug a grave 14 feet deep and placed Whiston’s child sized coffin at the bottom. There were three other parish funerals that day; 15-year-old James Harvey, 54-year-old Elizabeth Marks and 58-year-old William Walters. The sexton placed the three paupers’ coffins on top of Whiston’s and then filled up the grave. As far as we know the resurrection men did not manage to get their hands on Whiston’s mortal remains. 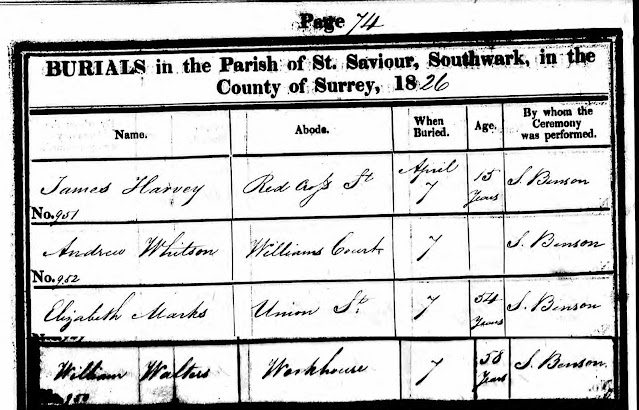 Contemporary accounts of Andrew Whiston (or sometimes Whitson or even Weston) described him as a ‘miserable’ or ‘wretched -looking object’, as ‘little, diminutive, and deformed’, and as a ‘remarkable production of the human species’. Just two feet four inches tall and known as the King of the Beggars, he was born in Dundee in 1770 but spent most of his adult life in London where he wheeled himself around in a handmade cart between his home in Southwark and his prime begging spots north of the river in the Adelphi.  His unusual appearance and irascible disposition earned him a degree of fame in Regency London; Pierce Egan featured him as one of the picturesque cadgers in ‘Life in London’ and his exploits frequently made the newspapers. On 29 December 1825 the Public Ledger and Daily Advertiser reported that the magistrates at Union Hall had listened to the evidence against a ‘respectably attired young man, named Stokes’. The young man was accused of being one of a gang of raucous and high-spirited young men who had ‘exceedingly ill-treated' the dwarf by burying him beneath a pile of mud. Stokes was acquitted after he explained he had tried to come to the rescue of the dwarf but had been interrupted by a patrol of Bow Street runners who immediately assumed he was the guilty party and, after exchanging a few words with him, “struck him on the eye”; the newspaper admitted that “the defendant bore visible marks of having received a severe blow”. When Andrew was placed on a chair to give his evidence, he admitted that he could not say whether the defendant had assaulted him or not.  Stokes was acquitted and the case was about to be dismissed when the members of the Bow Street patrol suddenly felt the urge to acquaint the magistrates with the true character of the victim;

Some of the Officers now said that the dwarf was great nuisance in the street; that he was very prone to insult females as they passed, using towards them some of the lowest and most indecent expressions of which the English language was capable; that he was apt to abuse all passengers when he was intoxicated, which in fact took place almost every night; for although he subsisted chiefly by begging, and could drink 30 glasses of gin, yet obtained enough of money to do this, from the Public; and, finally, that he was a sort of pet among the porters, who often treated him, and laughed at his indecent allusions; and was, indeed, occasionally encouraged by them in his wonted abuse towards the more respectable part of the passengers. 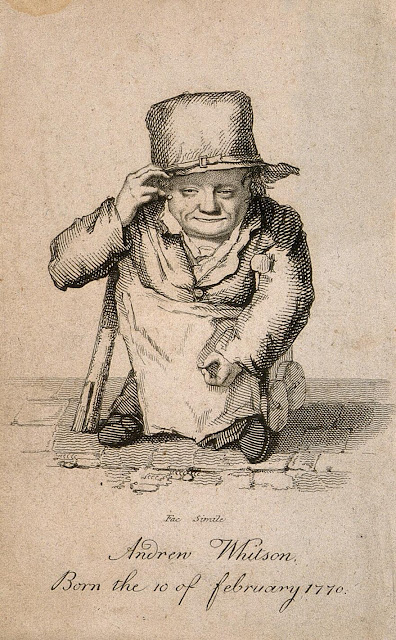 From the Morning Advertiser of Monday 10 April 1826;

CORONER’S INQUEST ON THE BODY OF ANDREW WHITSON, COMMONLY DESIGNATED THE KING THE BEGGARS. On Friday last an Inquest was held at the Rose and Bell public-house, Bankside, Southwark, before R. Carter, Esquire, on the body the above-named extraordinary diminutive individual, an account whose death appeared in most of the public prints during the last week. The Jury, upon being sworn, proceeded to St. Saviour’s watch-house, where the remains were placed in order to secure them from the clutches of the Resurrectionists, many of whom hovered about the neighbourhood on the report of his death gaining wind. The body was deposited in a box purposely contrived for its reception, and from its peculiar formation was, perhaps, one the most remarkable productions of the human species. The legs were curved, and had the appearance thin planks, having no calves; the shin bones were greatly protruded, also his chest, which was excessively contracted, and which might well be termed Pigeon breasted. His bead was of an extraordinary size, and his neck short and thick, which peculiarities evinced a predisposition to apoplexy. This extraordinary man when alive, was about two feet four inches height, and was thirty-three inches round the body, twenty-seven inches round the head, and thirteen inches from the chin to the crown. From the heel to the knee-joint he measured sixteen inches, ten from the knee-joint to the hip-bone, and seven inches and a quarter round the wrist. He was double jointed throughout, and possessed considerable strength, particularly in the hand, he slept on the floor, dressed and undressed himself, without assistance. The machine upon which travelled about the town cost him, wheels and all, about three shillings, and generally lasted him about three years.

Richard Uwell, a shoemaker, residing in Holland-street, Southwark, deposed, that he had known the deceased from seeing him pass up and down the street in a little truck or box on four wheels, which he impelled along with the assistance of crutches. He obtained his living principally by begging, and resided in William’s-court. On Monday night last witness was drinking at a public-house called the ‘Duke on Horseback’, Holland-street, with a man named Mist. Between nine and ten o’clock, Little Andrew as he was called, entered the tap room, and addressing witness, said, “I say, boy, take and carry me home, for I feel unwell all over”. Mist, the man who was with witness, observed, that they would convey him home between them if he gave them a pot of beer. Andrew consented, and they accordingly proceeded with towards his lodging, each taking him under the arm, the way in which he was usually carried home when he was unable to go by himself. On reaching the end of the court they set him on the pavement, when another man came up and requested they would place him on his shoulders and he would carry him home. They did so, and witness and Mist went away.

The Coroner here observed that a report had gone abroad in the neighbourhood, that the deceased was carried home with his head downwards. He asked the witness whether there was any foundation for such a report? The witness declared that the deceased was carried along in a perfectly upright position, and   and no tricks whatever were played upon him.

James Keaton, the man who carried the deceased on his shoulders up the court, deposed that when the last witness and Mist set down the deceased, he perceived his head droop down. Believing it was caused by intoxication, he did not feel any surprise at that circumstance, but went forward to the lodging and knocking at the door, it was opened by the landlady, who seeing it was her lodger (Little Andrew), immediately shut the door, saying that he should not enter the house. Witness then set down the deceased outside the door and informed the watchman of what had taken place, who eventually gained admission for him into the house, in the space of about ten minutes. Soon afterwards the landlady called the watchman saying that she believed Andrew was dead. Upon entering the room, the deceased was discovered sitting at a table which was purposely made for him, with his head reclining upon it. He then appeared to be dead, and on the arrival of a surgeon, life was pronounced extinct. One of the Jury asked the witness whether he could state the deceased was in liquor? Keaton replied, that to the best of his belief the deceased was sober at the time. As no surgeon was in attendance to give evidence as to the immediate cause of the deceased’s death, one was sent for, who described it to have occurred in consequence of apoplexy.

The beadle here informed the Coroner that a person was in attendance, who claimed the body of the deceased. It was asked upon what ground, whether he was a relative to the deceased? The beadle said the individual was in no way related to the deceased, that he had merely got a document in his possession, whether true or fictitious, he (the beadle) could not say, authorising him to receive the body after death.  The person however refused to come forward and put in his claim. Upon which the medical man observed, that as none of the deceased’s relations were anxious to bury him, he was convinced the College of Surgeons would consider it a great favour to have the body presented to them for the benefit of science. The Coroner, however, stopped short the application, observing that when the verdict was pronounced, he would immediately issue his warrant for the interment of the body.  It would be then given up to the parish authorities, who would of course act in a legal manner with it. The Jury having retired for a short time, returned a verdict that the deceased ‘Died of Apoplexy’. The day after the Inquest sat on the body it was conveyed to St. Saviour’s burial ground, and interred in a grave fourteen feet in depth from the surface, over which were placed other coffins in order to secure it against the resurrection men who were anxious to have the corpse to dispose of. 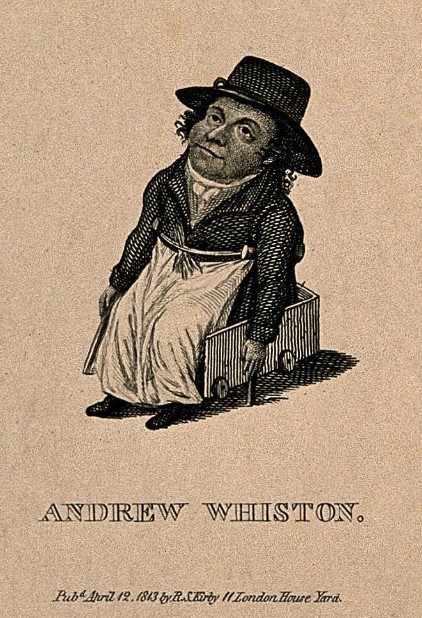