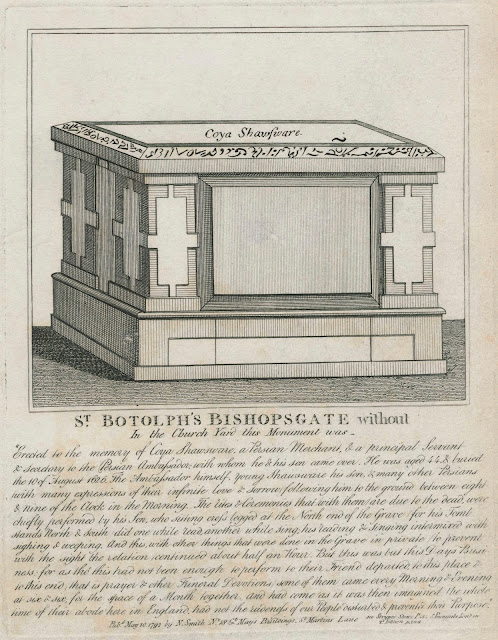 In the ‘Additions and Corrections’ to his 1790 edition of John Stow’s A Survey of London Thomas Pennant says of St Botolph’s, Bishopgate, that “In the coemetery of this church is the very remarkable tomb in the altar form of Coya Shawsware a merchant and secretary to Nogdi beg the Persian embassador….” By the time of the 1813 edition the wording has been changed to ‘in the coemetery of this church formerly stood..’ The first Muslim tomb in London had disappeared sometime in the previous 20 years.
The first reference to the tomb had been made in the fourth edition of Stow’s Survey edited by Anthony Munday and Humfrey Dyson and published in 1633. Munday was an older contemporary and possible collaborator of William Shakespeare’s and one of Philip Henslowe’s stable of Elizabethan playwrights.  He seems to have been a consummate hack and would turn his hand to prose if there was money in it. He worked on the third edition of the Survey published in 1618 and collaborated with the scrivener and book collector Humfrey Dyson on the fourth edition (the effort made by both men seems to have killed them– they both died in the year of publication). The deceased was a 44 year old Persian merchant Khwāja Shāhsuwār, phonetically transcribed by Munday as Coya Shawsware. In the book Munday’s account is illustrated with a line drawing of the altar tomb:


Sir Thomas Herbert, who later travelled to Persia as part of the first official English embassy to Shah Abbas later wrote in his Some Yeares Travels into Africa and Asia the Great wrote that “of the events of their enforced stay we hear little, save of trouble given to the company by the extravagant demands of Naqd Ali Beg and by his quarrels with a Persian merchant (Khwaja Shahsawar) who had come with him. This person died in August, 1626; but his son carried on the dispute and, and the Privy Council was forced to intervene.” He gives no details of the quarrel or why the Privy Council felt itself obliged to interfere. Despite the bad feeling between the Shahsawars and Naqd Ali Beg, the ambassador was present at the funeral of Khwaja when he died in August. We know few other details of the Shahsawars; the grief of Khwaja’s son Mohammed seems not to have stopped him falling in love with an English woman and apparently wanting to convert to Christianity. He was not alone in being attracted by the charms of the women of London; Naqd also started a relationship with a ‘lewde strumpet’ with whom he became so enamoured that he wanted to take her back to Persia. King Charles soon lost patience with the squabbling Persian envoys and sent them back to Persia with Sir Dodmore Cotton to take Shah Abbas’ advice on which of them was his genuine envoy. It was a ill fated embassy; Khwaja’s son died of a burning fever in the Arabian gulf, Naqd Ali Beg committed suicide and Sir Robert Sherley and Sir Dodmore Cotton died the following year before returning to England.


Mahomet, a Persian merchant returning for Persia in our ship, died of a burning-fever, his father Hodge Suar having paid nature her last tribute in London the year before. Nemo ante obitum beatus was verified in this person; but a happy man we hope this Mahomet died if, throwing away the rags of Mawmetry [i.e. Muhammadanism], he clothed his soul with the robes of true faith in Christ, whom we were told, a little before he left the world, he called upon as the only efficacious means of his salvation; again I say happy, if unfeignedly. At his putting into the sea the captain of our ship honoured his funeral with the rending clamour of four culverins, his carcass at that instant being committed to the mercy of the sea, no less sure a treasury than the earth till the Resurrection.
Thomas Herbert


We came to anchor in Swally Road Nogdi-Ally-beg, the Persian Ambassador (Sir Robert Sherley’s antagonist), died, having, as we were credibly told, poisoned himself – for four days eating only opium. The Mary (where he died) gave him eleven great ordnance at his carrying ashoe, his son Ebrahim-chan conveyed him to Surat (10 miles thence) where they entombed him him not a stones cast from Tom Coryat’s grave…
Thomas Herbert