The Accidental Death of a Gravedigger; Brompton Cemetery 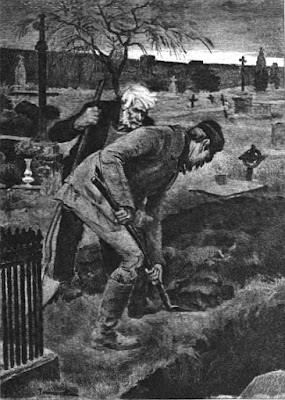 A grave, like any deep excavation, is potentially a dangerous place. Most graves are dug to a depth of between six and ten feet and, in the final stages of excavation, the gravedigger is in a pit completely below surface level. Earth close to the grave, or even in the grave itself, has often been previously dug and is more prone to shifting than dirt unacquainted with the spade and mattock. Grave sides require shoring up with planks and excavated earth needs to be stored at a safe distance from the mouth of the grave to stop it falling back in. Gravediggers who cut corners or who are just plain unlucky can suffer horrific accidents. Between 1863 and 1875 no less than 3 gravediggers and an unemployed acquaintance of the cemetery workers were buried alive at Brompton Cemetery; three of the four died.

Amongst many other newspapers, The Irishman of Saturday 28 November 1863 reported the death of 49 year Henry Baker:

Mr. J. Bird, coroner for the western division of Middlesex, hold an inquest Tuesday night, at the Bull’s Head tavern, Middlesex, on the body of Henry Baker, aged forty nine years, who met his death in a grave at the Brompton Cemetery, under the following shocking circumstances. The deceased, it would appear from the evidence, was a grave-digger, and while engaged in that occupation in a deep, newly-dug grave, the earth, as soon as the struts were removed, gave way, and the poor fellow was covered. A man who was at work nearby at once gave an alarm, and after a short time the unfortunate man was got out, but life was found quite extinct. After a short deliberation the jury returned a verdict that the deceased was accidentally killed in a grave.

In July 1873 unemployed 19 year old Alfred Hunter went to the cemetery to watch a Polo match at the Lillie Bridge Sports Ground. The grounds adjoined the cemetery close to West Brompton station and anyone prepared to scramble to the top of the cemetery wall could get a free view of any events taking place inside. Hunter paid dearly for his afternoon of free entertainment as the Royal Cornwall Gazette reported:

A tragic incident has occurred in Brompton Cemetery, which resulted in the death of a young man, Alfred Hunter, aged nineteen years, of Cumberland place, Marlborough- road, Chelsea. The deceased, who was out of employment, was acquainted with some of the grave-diggers, and went to the cemetery with the intention of standing on the wall and witnessing the Polo match in the adjacent Lillie-bridge Grounds. During the afternoon, while he was near a newly-dug grave, the ground gave way, and he was buried alive beneath seven feet of earth. The dead body was conveyed by the police to Kensington workhouse mortuary.

Less than two years later two gravediggers were buried alive in a nine foot deep grave; one of them only to the waist but the other, who was at the bottom, was completely interred. Witnesses could clearly hear him calling for help; the poor man probably only succeeded in using up his limited air supply by his cries for assistance. The Sheffield Daily Telegraph of Thursday 27 May 1875 has the full story:

On Tuesday night Dr. Diplock held an inquest at the Black Bull Inn, Fulham Road, London, upon the body of Samuel Matthews, aged 43 a grave digger, whose death was caused by the falling in of a grave at Brompton Cemetery. The evidence went to show that on Saturday last the deceased and another grave-digger named Holloman were digging a grave. The latter was on a platform about 2 feet 6 inches below the level of the ground, and the other was at the bottom, a depth of about 9 feet 6 inches. The deceased called out to Holloman, and then the grave fell in. Both men were buried, but Holloman only up to his waist. Vaughn, another gravedigger, heard cries for assistance and went to the spot. He quickly extricated Holloman, who appeared at the time to be much hurt, but he could see nothing of the deceased, although he could plainly hear him below the earth calling for assistance. With help the deceased was dug out; he was in a kneeling position, and was quite dead. It was elicited on questioning some of the witnesses that the distance between the last strut and the bottom of the grave was 15 inches, a space deemed by the Coroner and jury to be too great in a sandy soil. The jury returned a verdict of "Accidental death."


One would like to think that the spate of fatal accidents made the cemetery authorities take steps to avoid further tragedies and I certainly have not been able to trace any further accidents of this sort after the death of Samuel Matthews.
Posted by David Bingham at 13:01