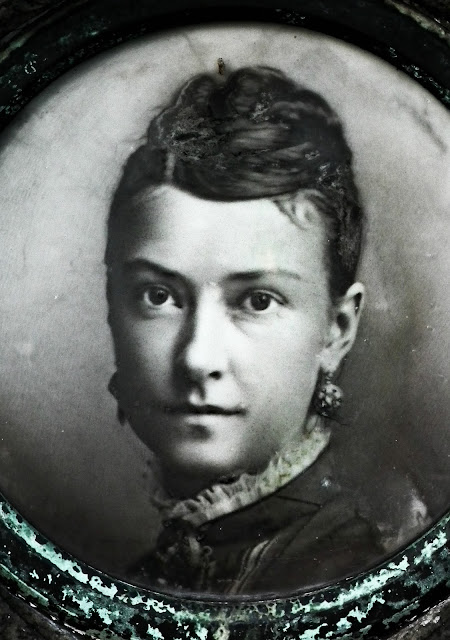 She died young and had beautiful eyes; that is obvious from the photograph of her probably taken when she was in her mid twenties, shortly after her marriage in 1870 to Henry Clay Gallup. Henry must have loved the portrait as he had it reproduced on porcelain and set on her grave; a very novel practice in the 1880’s. 130 years later the ceramic plaque is still in excellent condition and Lucy Renaud’s lovely eyes continue to regard us rather hauntingly as we pass by her tomb.

Lucy was born in 10 June 1847 in to Peter Thomas Renaud and his wife Mary Frances.  Peter Renaud was third clerk to the Duchy of Lancaster and the family lived at 15 South Street (now Terrace), Thurloe Square, SW7, just south of the Victoria and Albert Museum on the Cromwell Road.  Lucy was baptised at St Luke’s in Chelsea and, four days after her twenty third birthday, was also married there to the 35 year old American Henry Clay Gallup. Henry had been born in Stonington, Connecticut in 1834, to an old New England family, their ancestors having moved there in the 1630’s. Henry worked as a travelling agent selling patent medicines for the New York firm of Jeremiah Curtis & Sons. He was eventually made a partner and sent to London to set up a European branch of the business to be called the Anglo American Drug Company. By 1871 we know he had premises at 493 Oxford Street because he was a witness in a court case; a young man called Phillip Cann was indicted at Bow Street Police Court for fraudulently endorsing a cheque for £16. Cann worked for the Globe newspaper as an advertising canvasser and regularly took adverts from Henry Gallup. In April he called at Henry’s premises and requested payment for the latest advertisements placed in the Globe. Henry wrote a cheque for £16 to the Globe’s proprietor William Thomas Madge which Cann then fraudulently endorsed and cashed.  The Illustrated Police News called Henry a “toilet manufacturer”, and we know his products included Fragrant Florilene, a liquid tooth cleaner, and Mexican Hair Renewer.  The business was obviously doing well because by the following year he was a director of the Cedar Creek Gold Mines and Water Company and his address was listed as 54 Guildford Street, Russell Square.

In 1881 Lucy and Henry were living at 39 Marine Parade,  Brighton with their six year old son, Henry Junior.  In the census returns for that year Henry lists himself as a retired merchant.  Less than two years later Lucy was dead at the age of just 35. Henry must have been devastated. He only lasted another couple of years himself, dying in 1885 at his home, Preston House, The Avenue, Upper Norwood, leaving an estate valued at £131,947 14s 9d to his 11 year old orphaned son.