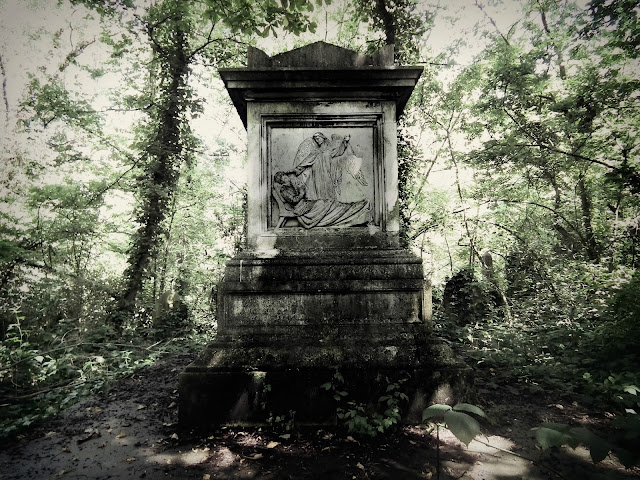 Unless you know where in Nunhead Cemetery to look the impressive memorial to John Moritz Oppenheim and Frederick Schroeter is hard to find; it must once have been clearly visible from the main path but the unchecked growth of trees and shrubs has hidden it in its own secret grove. Although I had never heard of them I assumed Oppenheim and Schroeter must have been artists – the badly eroded, apparently vandalised, panels seem to indicate that. In one a seated man touches a sculpture of a woman’s head (one description I read described him as ‘fondling a female bust’) possibly of the classically draped woman who stands to the side; sculptor and model I assumed. Another panel shows a seated man and a standing female figure holding what may be a canvas, an artist’s palette and brushes on the floor. In the third panel an angel touches the eyes of a man reclining on a day bed. But Oppenheim and Schroeter were in fact fur traders, and the only connection they had with the arts was Oppenheim’s love of painting. He was a collector and patron who ironically went blind for the last twenty years of his – the angel touching the dying man’s eyes perhaps restoring his vision and the man fondling the bust because he can no longer see?

Johann Moritz Oppenheim was born in Hamburg in 1801/02. We don’t know when he came to England but he set himself up in business as a fur trader in the city in 1823, as soon as he was legally old enough to do so. His business which specialised in the Alaska fur trade (the pelts of seals, sea otters, beavers and racoons) prospered and he died a wealthy man. He never married and lived close to his business in Cannon Street.  He was a passionate collector of art and in his will left several paintings to the National Gallery; his blindness robbed him of one of the great pleasures of his life.  The business was inherited by his nephew by marriage and partner, Frederick Schroeter but he left a number of other legacies including a £1000 bequest to the Hungarian president Louis Kossuth “in admiration of his wisdom, and patriotism”, £100 each to five London hospitals, including St Thomas’, £100 each to his chief clerks in London, Moscow and Hamburg and a year’s wages to all of his servants.

Oppenheim was a quiet man who lived away from the public eye. Apart from his death the only mention of him in newspapers are in court cases where he was the victim of fraud or robbery. In 1840 a young man named Jacob Isaac found himself arraigned before the Lord Mayor at the Mansion House, accused of obtaining goods by deception from a number of furriers.  The prosecuting solicitor ushered Oppenheim into the witness box with no prior warning to the defence to tell his story of accepting a bill for £185 and some shillings from Isaacs, presumably in payment for furs. When the bill had become due and was presented at Barclays the cashier told Oppenheim there were ‘no orders’ and it soon emerged that it was a forgery.  The defence objected to the last minute presentation of what amounted to a new and more serious accusation against their client. The Lord Mayor was unimpressed and forgetting about the original charges of obtaining goods by deception remanded Isaacs solely on the charge of forgery.  Perhaps the case never came to court – I have not been able to trace any trial.

In April 1862 another German born furrier, Gotthard Pohler, went on trial at the Old Bailey accused of receiving stolen goods, namely two sealskins, 26 muskrat skins, and 160 racoon tails to the value of £5.00.  Pohler had received the furs from Leopold Warnecke of Buttesland Street, Hoxton, an employee of Oppenheims who had pilfered them from his employer. Warnecke was soon caught; he only worked for Oppenheim for 8 weeks.   As soon as he was caught, and afterwards in court, he had no hesitation in both confessing and informing on his partners in crime. Pohler had bought the furs from Warnecke and then sold them on to his employer, a supposedly respectable furrier, William Pearce Lillicrap of Davis Street, Berkeley  Square who clearly operated an ’ask no questions’ policy when offered stock at knock down prices by his employees. He was most put out when Oppenheim’s manager and a detective from the City Police paid him a visit. Lillicrap called Pohler and, swearing he knew nothing of the origins of the stolen furs, handed him over to the police. Warnecke was spared prosecution in return for his sworn testimony in court. Lillicrap too walked away scot-free, happily giving evidence to the court about Pohler but earning himself the censure of the jury who clearly thought he was as dodgy as his employee, to which the Recorder added his agreement, saying that his excuses should not be allowed. Poor Pohler, whose wife was about to give birth, got four years hard labour.

Under Schroeter’s guidance the Oppenheim & Co went from strength to strength. In 1869 he moved south of the river, opening the Alaska Factory in Grange Road, Bermondsey. Only the original gate still stands with its carving of a seal; the famous art deco building behind the gate was designed by Wallis, Gilbert and Partners, the architects of the Hoover building. Schroeter lived in Mottingham in a thirty room mansion set in 38 acres of grounds and died there in 1876. He had erected the memorial to his benefactor in Nunhead Cemetery a couple of years after his death and he also chose to be buried with him.  He left an estate worth more than a quarter of a million pounds which included farms and houses in Surrey as well as the family business.


In 1982 the Oppenheim Schroeter memorial was heavily vandalised and the burial vault broken into and desecrated by grave robbers. 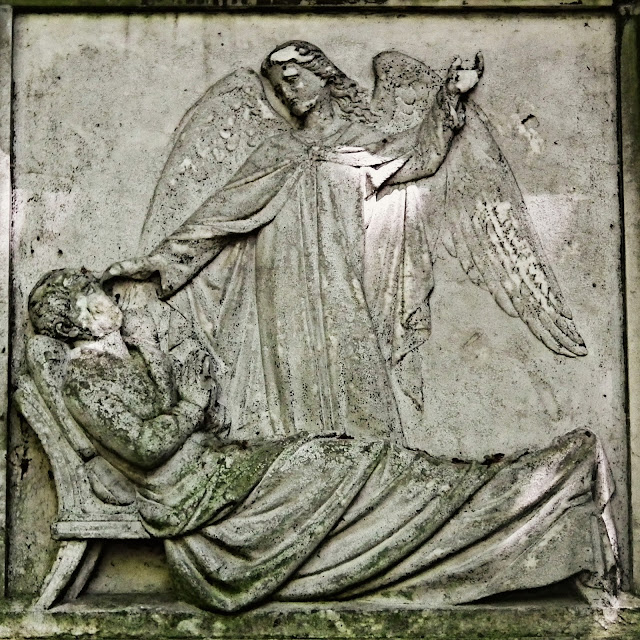 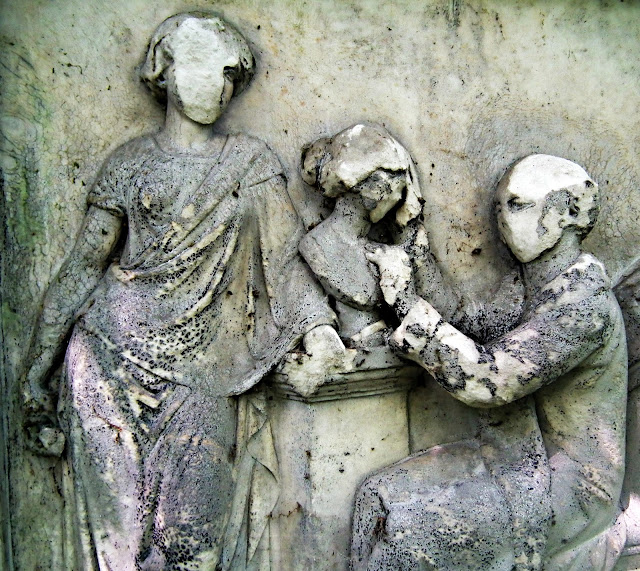