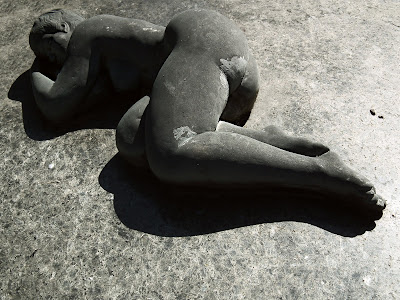 It is unusual to see such an unashamedly erotic nude in a cemetery – such blatant disregard for the proprieties can only mean that the grave belongs to a foreigner, and not just any foreigner, but an artist. Paul Hamann was born in Hamburg in 1891 and studied at the local Arts & Crafts School and in Paris with Rodin. He served in the First World War, returning afterwards to Hamburg where he was prominent in local artistic circles. In the 30’s he left Germany to escape the Nazi’s, initially in Paris where he lived for three years at the Cité Fleurie artists colony, and then later in London. He set up a studio and a private art school in Hampstead in 1938 and became a member of the Hampstead Artists Council.  Before the outbreak of World War II he became a founder member of the Free German League of Culture, helping to organise shows at the New Burlington Gallery of the work of German, Austrian and Czech artists persecuted by the Nazis. His credentials as an anti Nazi campaigner did not prevent him being interned as a potentially hostile alien in the Hutchinson Camp on the Isle of Man in 1940. He spent a year there before being released. He later became a British Citizen.

Paul married Hilde Guttmann in the early 1920’s. Hilde was born in the city of Breslau in Silesia (now Wroclaw in Poland) in 1898 to a well to do mercantile family with Jewish roots. She met Paul when she was a student of his at the Hamburg School of Applied Arts. In 1924 she stayed in Paris for six months where she studied at the studio of Fernand Léger. In Germany she painted but in England after the war she became more interested in ceramics and then later in enamels. Her own artistic career took a back seat to her husbands, for many years she worked as his assistant. Whilst Paul was interned she became the principle breadwinner. When he was released it seems the marriage broke down though the couple continued to work professionally together.
Paul Hamann is principally remembered now for his technique of creating life masks. In the 1930’s,  according to the catalogue of an exhibition of his work at the Warren Gallery, he “perfected a substance with which life-masks can be taken subtly and painlessly. His preparation looks like tomato soup and smells faintly of vanilla. … It is the gentlest, kindliest, most coaxing process imaginable. .. And the result, as you observe, is magnificent…. All this will be achieved by you and Herr Hamann if you consent to sit patiently in a chair for forty minutes.” His preparation was so good for the skin that Elizabeth Arden tried to get hold of the formula. Hamann’s life masks were immensely popular in Germany, France and London. Bertolt Brecht had one made and then had himself photographed holding it. 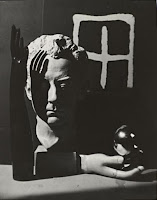 In England Hamann’s sitters included Lady Ottoline Morrell, Raymond Mortimer, Noel Coward and Raymond Mortimer.  In Paris the surrealists were enthusiastic; Paul Eluard got Andre Breton interested in death masks and both of them indulged their obsession by having Hamann make life masks for them. After Breton’s death amongst his unpublished papers was an encomium he had written on Hamann and his technique called “Le Masque du jour”. Hamann also made a mask for Man Ray and was photographed in the process of applying his tomato and vanilla mixture to the American’s face. Man Ray loved this life mask so much that he used it in several photographs including the one used as the cover for his book “Photographs 1924-1930 Paris.”