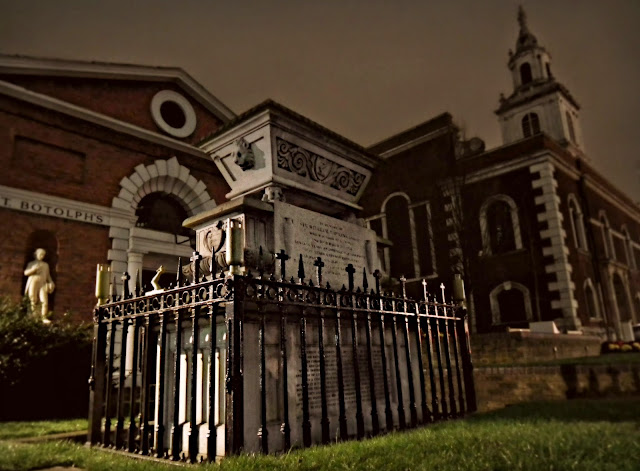 Sir William Rawlins was a man who had very definite ideas on what he wanted for his funeral and he made sure that clear instructions were left in his will: “I desire that … my body may be placed in a lead coffin and that it be interred in the vault belonging to me in Bishopsgate Churchyard .….. That my funeral may be a walking procession and that it commence from my own house down Liverpool Street to the Catholic Chapel to turn on the lefthand up Bloomfield Street to the end of New Broad Street then through the Iron Gates up the said street to Bishopsgate Church Yard. I also desire that the entrance to my vault may be enclosed with good sound and solid brick work so as to prevent the further use thereof by any person whatever, and I also desire that a respectable mausoleum or tomb may be erected over the said vault of well manufactured polished Haytor Granite with designs of scientific excellence which may do honor to the artist whom my said executors hereafter named may think proper to employ. It is also my wish that a cast iron railing may be erected round my said tomb and to be at least five feet ten inches high and to be well painted four times in oil.”

He also had very definite ideas about how he should be remembered. According to the London City Press on Saturday 20 August 1859: "The late Sir William Rawlins, KT…… was very desirous to be held in remembrance by the Ward which he had represented and resided in many years. He, therefore, by a codicil to his will ….dated 18th of April, 1838, directed his executors to set apart a sufficient sum out of his personal estate as would produce a clear annual income of 15l., in the name of the Alderman of the Ward, the Deputy, and two others of the Common Council of the Ward of Bishopsgate Without (only), upon trust to keep his vault, then already built, and his tomb or mausoleum, and the iron railing, for which he had entered into a contract with Mr. Samuel Grimsdell to erect to his memory, at a cost of 315l., according to a plan of which he had approved, in good repair and condition......”


Sir William’s will also included provision to pay for a “respectable” biannual dinner to be held on 24 July (his birthday) for the Alderman and the Common Council of the Ward of Bishopsgate Street Without, “the testator directs that, previous to dining, the tomb and railing shall be inspected, and the necessary orders given for the repairs and embellishments required; and that the codicil read at each dinner, in order that the same may be preserved fresh remembrance.” Each council man who attended both the inspection and the dinner was to receive a fee of one guinea.  According to the London City Press the eleventh biennial dinner was held on Monday 25 July (Rawlins will stipulated that if July 24 the dinner should be held on the following Monday) “at which Mr. Alderman W. T. Coneland, Esq., M.P., presided, supported in the vice-chair by W. H. Pilcher, Esq., Deputy. There were also present: R. Ashby, T. S. Owden, M. and J. Richardson, Esqs., Common Councilmen of the Ward of Bishopsgate Without, and who duly performed the functions of their office, as directed by Sir William Rawlins. The Alderman, after dinner, proposed the standing toast, "The pious memory of Sir William Rawlins." After the healths of the Alderman and Deputy, and several other toasts, the gentlemen departed, with the idea that "it's well to be remembered;" and so Sir William thought. Peace to his ashes! say we.”

When St Botolph’s churchyard was cleared of tombstones and other memorials Sir William’s trust fund for the upkeep of his rather splendid memorial seems to have been an obstacle to its removal. Apart from a handful of gravestones used as paving slabs and the Rawlin’s memorial the entire churchyard was emptied and converted to a garden. The initial £500 investment lasted until 2013 when the parish council used the last of the money to refurbish their last remaining churchyard memorial. The then Alderman of Bishopsgate, Neil Redcliffe, lead the Common Councilmen and local business leaders in a final inspection of the tomb and a graveside toast to Sir William before launching an appeal for funds for future restoration work.

Sir William was born in Bridgecomb, Berkshire in 1753, the son of a farmer. At the age of 17 he became apprenticed to a London weaver but three years later was turned over to an Upholder and eventually gained the freedom of the Upholders Company. He became a successful business man and benefactor of the church and local schools who dabbled in politics. This dabbling cost him a couple of months in Newgate in 1805. He had become Sheriff of London in 1801 and after his term of service was knighted. In 1805 he and his fellow Sheriff Robert Cox were indited for election fraud in getting Sir Francis Burdett elected as MP for Middlesex. They were accused, and found guilty, of accepting at least 300 fictitious votes and thereby securing Sir Francis’ seat. Sir William went on to found the Eagle Insurance Company (later Eagle Star) and died in 1838 at the age of 84.