The tomb of Rowland Stephenson of Downhills House lies in the churchyard of All Hallow’s Church Tottenham.  Stephenson (1737? – 1807) was a wealthy banker originally from Westmorland in Cumbria. He was a founder member of the Lombard Street banking firm of Stephenson, Remington & Co. He was also MP for Carlisle between 1787 and 1790 though not a very active one; his only recorded votes in the house were with the opposition over the Regency and he never spoke on any matter. He did not stand for re-election at the end of his term. Buried with him is the wife of his great-nephew and namesake Rowland Stephenson, Mary Eliza Stephenson (1786 – 1820) of Marshalls in Essex. It is hard to see quite why Mary, who married Rowland Junior the same year Rowland Senior died, is buried here perhaps because the Stephenson’s were an exceptionally close family, Rowland Junior and Mary were cousins and Mary’s father was not only Rowland’s uncle and father-in-law but also a business partner in Stephenson, Remington & Co.

Rowland Junior was born aboard ship in 1782 when his parents were fleeing America. His father had been a merchant in Florida but was forced to leave when the Spanish captured the colony from the British during the American war of Independence.  He became a partner in Rowland Seniors banking firm on his return to England. Rowland Junior joined them when he finished his education at Eton and became a fully-fledged partner in 1822. In the early years of his career he married his cousin Mary who was small and delicate and came from a musical family. Her father was an expert on the music of Johann Sebastian Bach and a collector of Cremona violins.  Mary was also a musician and Hester Lynch Piozzi (better known as Dr Johnson’s Mrs Thrale), wrote in a letter that she “carries the applause away from many a fair dilletente (pianoforte) player”. The composer Ferdinand Ries dedicated to her his “A Russian Sailors Song.” She continued with her musical interests into her marriage to Rowland; in 1817 she became a private pupil of Sir George Smart, a close friend of the family and one of England’s most famous musicians, conductor of the London Philharmonic and lecturer at the Royal College of Music. Later her son Edward was apprenticed to Sir George.   When her husband bought Marshalls, a ‘pretty villa’ with 300 acres near Romford in Essex in 1816 the couple enjoyed a few tranquil years of happiness with their large family of 8 children. They entertained every Sunday, inviting their friends to parties and musical soirees in the Essex countryside. During the week Rowland rode to work in Lombard Street from Romford and returned each night to his family. Mary was esteemed by the Romford locals (although her husband was apparently not so popular) but the banking business was flourishing, the family were healthy and the couple were happy. Then in 1820, at the age of 34, Mary unexpectedly died, probably in childbirth.  Rowland buried her with his great uncle in All Hallows churchyard and probably intended to join her there himself despite his growing list of connections with west Essex. 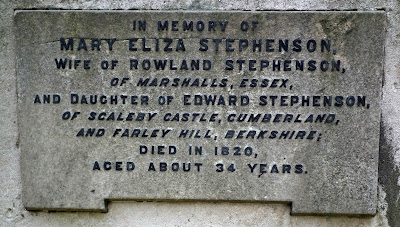 He had bought himself the manor lordship of Cockermouth in Dagenham, the How Hatch estate in Braintree, a mill house in Romford and various other local properties as well as purchasing manors and houses as far away as Dover. Property was only one of Rowland’s extravagances however. He had previously tried to follow his follow his great uncles footsteps by getting himself elected as MP for Carlisle in 1816 but the effort failed through lack of funds. After Mary’s death he threw himself back into politics but this time money seemed to be no object and there followed a series of costly by election challenges across the country – West Looe in February 1822, Newport in March 1823, Carlisle again in 1825 and, in the 1826 general election, Leominster where he came in third in a borough that made a double return (i.e. elected two MP’s). One of the successful candidates ran the lottery and Rowland mounted a legal challenge arguing that as a government contractor he was disqualified from standing. The challenge was successful, eventually, and Rowland became an MP on 19 February 1827. After getting himself elected he turned his attentions to assisting his brother-in-law win the Sudbury by election in 1828. Having gone to such efforts to gain himself a parliamentary seat Rowland then seems to have taken relatively little interest in his new position, making no speeches in the house and voting only on three or four occasions Perhaps his mind was on other matters.
In December 1828 he was living in an apartment at St Bartholomew’s hospital where he held the honorary position of treasurer. On the 27 December his partners at the bank discovered that his assistant, John Henry Lloyd, had made large unsecured advances and the bank was forced to suspend payments. On hearing the news Rowland immediately left his apartment and sought out Lloyd and the two men then fled together to the West Country. In Clovelly and Bristol they had themselves smuggled out of the country on fishing smacks but initially only as far as Wales. From Milford Haven they took passage on a ship to Savannah in Georgia. It was believed, incorrectly, that they had fled with £200,000 in exchequer bills and the Lord Mayor of London issued a writ for their arrest. Rumours abounded and were reported with great relish by the newspapers, Rowland had been £30,000 overdrawn at his bank for years they said, he kept six women and three country estates, he had private boxes in all the London theatres, gambled regularly and excessively and so on. By 4 January Remington’s had declared itself bankrupt and an indictment was issued at the Old Bailey on the 16, as a prelude to outlawry proceedings in King’s Bench, charging Rowland with embezzlement. By the 29 January an auctioneer was instructed to sell off Rowland’s assets to satisfy his creditors. It took the auctioneer, Shuttleworths, almost 6 months to get rid of Rowlands many assets the Essex estates, a mansion and its contents in Dover, a box at Drury Lane theatre, paintings, antiques, and the contents of David Garrick’s villa at Hampton, Middlesex, which he had purchased in 1823 all went under the hammer. In January 1830 he was declared formally bankrupt and stripped of his position as an MP as a result. 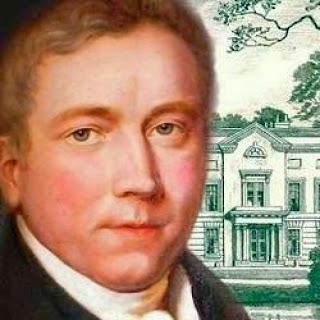 Meanwhile Rowland and Lloyd, travelling incognito as Smith and Larkin, arrived in New York on the 27 February 1829. There disguise proved inadequate to protect them from the law and they were almost immediately arrested and placed in debtors prison whist awaiting the outcome of extradition proceedings. These took place relatively quickly but failed because the courts judged that as neither Rowland nor Stephenson were convicts they could not be sent back to England under duress. On March 26 they were released. Lloyd tried to protect his boss by assuming full responsibility for the transactions that had brought the bank down but given Rowlands alacrity in fleeing London and then England as soon as his subordinates crimes came to light no one really believed that the banker had no idea what was going on. He was not left destitute however, his family stepped in to assist him financially, supporting him in America and looking after his children in England. His eldest son, just 21 when this his father was disgraced, almost immediately sailed from England to see him and, whilst he was visiting, purchased for him a 170 acre estate on the Delaware River in Bensalem in Pennsylvania for $15,000. Rowland took up residence there in October 1829 and lived on the property until his death in July 1856. He never remarried. His obituary in the Bucks. County Intelligencer described him as ‘formerly a banker in England’, long since settled in Bristol, where ‘he was universally esteemed for his benevolence and kindness to the poor and distressed’. He was buried in the churchyard of St. James’s Episcopal Church in Bensalem, 3500 miles away from poor Mary in All Hallows Tottenham who has only her husband’s embittered great uncle  for company, a man who must have felt his great nephew’s disgrace keenly and probably has not a single good word to say about him.
Links
Rowland Stephenson in Parliament:
http://www.historyofparliamentonline.org/volume/1820-1832/member/stephenson-rowland-1782-1856
Posted by David Bingham at 15:45