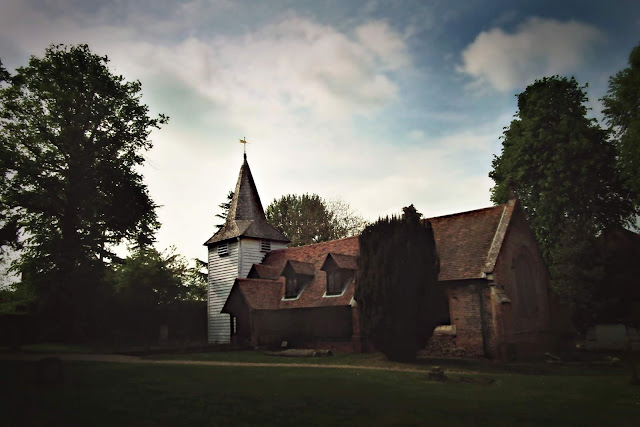 Greensted-juxta-Ongar is a hamlet 23 miles from central London and deep in the Essex countryside. Until it closed in 1994, it was just a 20-minute walk from what was then the last stop on the eastern section of the Central Line at Ongar. It is a bit more difficult to get to these days; it is a 6-mile trek on foot from Epping station or 9 miles from Brentwood. It is famous for having the world’s oldest wooden church and for being one of the overnight resting places of the miracle working remains of St Edmund the Martyr as they were taken from London to Bury-St-Edmund’s. “The church is famous all over England as the only survivor – and what an unlikely survival – of a log- church. Moreover, it can with some probability be dated c. 1013, the year of the passing through of St Edmund’s body,” says the great authority on English architecture, Nikolaus Pevsner in the Essex volume of ‘The Buildings of England.’ Since 1954 when Pevsner wrote the date of the wooden nave has been pushed forward by half a century to the early 1060’s but there is no disputing that the existing building predates the Norman conquest and is the only surviving log built Saxon Church in England and that it is the oldest wooden church in Europe. 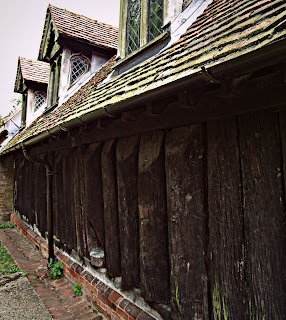 A wooden church has been on this site since the late 7th century shortly after St Cedd, a Saxon trained in the monastery at Lindisfarne, was sent south to convert his pagan brethren in the land of the East Saxons, Essex. Earlier wooden buildings have been uncovered beneath the chancel of St Andrews and are probably the remains of these earlier churches.  The nave walls, as can be seen in the photo, were built from vertically split oak logs and held in place by an oak sill. The sill was replaced in a major restoration in 1848 and a brick plinth was added to strengthen the walls. The dormer windows are Tudor, the brick chancel dates from the early 16th century and no one is sure when the Tower was built but like many church towers in Essex it is a timber construction with clap board laid over an oak frame. Although dedicated to St Andrew the church has strong links with St Edmund, and a carving on one of the roof beams at Greensted shows a wolf guarding his severed head.


According to Edmund’s earliest biographer, Abbo of Fluery who wrote his Passio Santi Eadmund over a hundred years after the King had supposedly been martyred, he was crowned King of East Anglia at the age of 15. In 869 Edmund was captured by the marauding Danish army of Ubbe Ragnarsson and Ivar the Boneless.  Abbo relates how Edmund refused to fight Ivar, and was beaten senseless with cudgels in the hall of the Dane. When Edmund called on Christ for help, he was taken outside and lashed to a tree. The Danes were curious to see if his God would save him. They then shot him full of arrows “as with bristles of a hedgehog,” as Abbo put it. His corpse was then decapitated and the head flung deep into the woods. When his subjects recovered the corpse, they struggled to find the missing head. The men looking for the head became separated and began to call ‘Where are you?’ to their companions. ‘Hic! Hic! Hic!’ a voice replied, ‘Here! Here! Here!’. Following the voice, they discovered the severed head of the king lying between the fore paws of a wolf. The ferocious animal appeared to have been guarding the holy man’s head as it relinquished the relic without so much as a growl and walked off into the forest. St Edmund was buried at the Benedictine Abbey at Bury St Edmunds but his body was later exhumed and removed to London for safekeeping. Legend has it that all traces of the arrow wounds had disappeared from the corpse and that the head has miraculously re-joined to the body with only a thin red line to show that they had ever been severed.  The body was returned to Bury St Edmunds in 1013 and it was during this second journey that the remains of the martyr rested at Greensted.