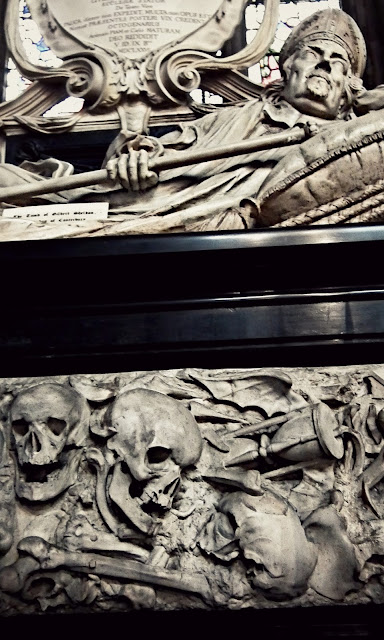 “Among other discourse, my cozen Roger told us a thing certain, that the Archbishop of Canterbury; that now is, do keep a wench, and that he is as very a wencher as can be; and tells us it is a thing publickly known that Sir Charles Sidley had got away one of the Archbishop’s wenches from him, and the Archbishop sent to him to let him know that she was his kinswoman, and did wonder that he would offer any dishonour to one related to him. To which Sir Charles Sidley is said to answer, “A pox take his Grace! pray tell his Grace that I believe he finds himself too old, and is afraid that I should outdo him among his girls, and spoil his trade.” But he makes no more of doubt to say that the Archbishop is a wencher, and known to be so, which is one of the most astonishing things that I have heard of.”   Samuel Pepys “Diary Monday 29 July 1667.”

Pepy’s cozen Roger was always good for a bit of scurrilous gossip. He was not particularly scrupulous about his sources though and his stories were often slanderous and sometimes just plainly ridiculous.  Gilbert Sheldon, the Archbishop of Canterbury who was the subject here of cozen Roger’s gossip, appears to have lived a fairly blameless life and, far from being a ‘wencher’, was so uninterested in women that he never even married. 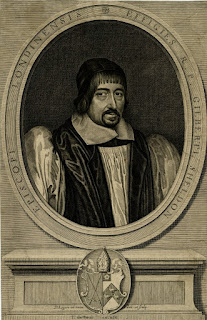 Sheldon was born in Staffordshire in 1598 and was educated at Oxford. He became involved in the church and politics, was a Royal Chaplain to Charles I and was well known as a prominent Royalist in the run up to the Civil War. During the Protectorate he lost his church livings and survived on the generosity of friends and supporters until the Restoration in 1660 when Charles II made him Bishop of London. He became Archbishop of Canterbury in 1663 and Chancellor of the University of Oxford in 1667.  He opposed Charles II’s proposed Declaration of Indulgence which sought to extend religious freedom to Catholics and it is said he once refused to give the King communion because of his majesty’s libertine lifestyle. He was one of Christopher Wren’s earliest architectural patrons – Sheldon commissioned and paid for the Sheldonian Theatre in Oxford and chose Wren as the architect. He died in 1677 and is buried in the Minster of St John the Baptist in Croydon.

Sheldon’s spectacular funeral monument is by Jaspar Latham (died 1693) a master mason who worked with Christopher Wren. Only four funerary monuments by him are known but the other are not in the same class as this one. The reclining figure of the bishop was once set against a grand architectural backdrop decorated with putti and garlands but this was destroyed in the church fire of 1867. Miraculously the bishop survived along with the chest tomb decorated with a relief panel of skulls and bones and winged hourglasses.

Latham worked with Sir Christopher Wren as a mason contractor on the rebuilding of St Mildred Poultry and on St Paul’s Cathedral for which, in the 1680’s he received almost £10,000 in regular payments for masonry and carved ornaments. He fell out with Sir Christopher in 1689 when he was working for Wren at Hampton Court and part of the building works he was responsible for as mason collapsed killing two workmen and injuring 11 others.  The comptroller of works William Talman tried to blame Wren for the accident and Latham joined him. The furious architect dispensed immediately with the mason’s services at both Hampton Court and St Pauls and objected ‘against Mr Latham for a madman.’ 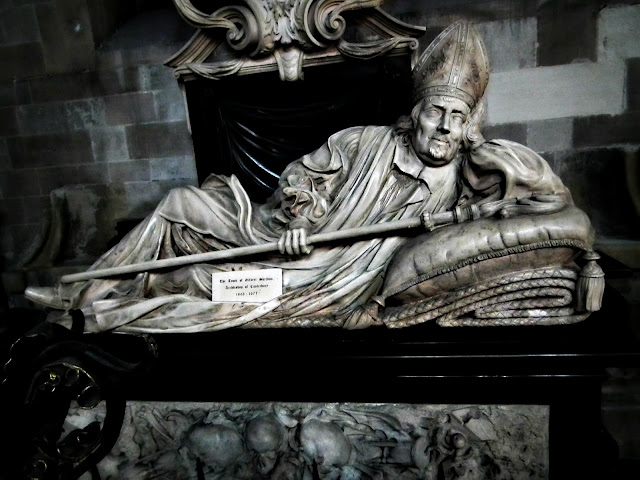 Gilbert Sheldon’s ghost is supposed to have haunted the church following the fire of 1867 which destroyed his monument. He was generally seen moping sorrowfully around the nave at “about a quarter to six in the evening.” He kept this up until 1960 when the monument was restored and has not been seen since.