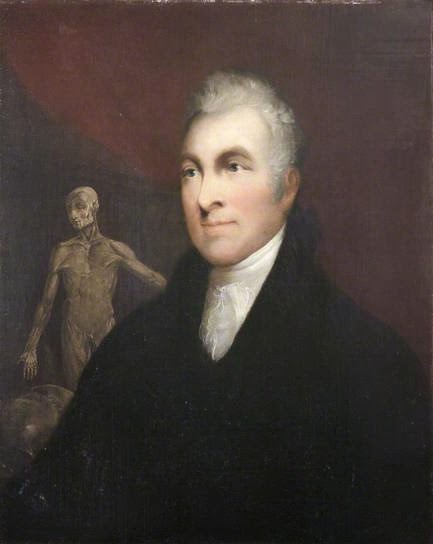 Ms Johnson  was Maria Van Butchell's inseparable companion for 125 years, they were exhibited side by side in the Hunterian Museum and perished together in 1941 in the conflagration that followed the direct hit on the Royal College of Surgeons by a fire bomb  during the blitz. In the 1830 museum catalogue she was described as “the embalmed body of a female subject aged 24, of the name of Johnson , who died of phthisis in the Lock Hospital, about the year 1775 and left her body for dissection to Mr Sheldon, who was at that time a pupil of that charily…..Presented by Mrs Rebecca Sheldon Dec 24th 1808.”

Ms Johnson’s embalmer John Sheldon, anatomist and surgeon, was born 6 July 1752 in Tottenham Court Road. He was educated at Harrow and apprenticed to Henry Watson the professor of anatomy at the company of surgeons. He trained at the Westminster and Lock hospitals and in 1774 became resident pupil to John Hunter. After a year in the Lock Hospital he was appointed Lecturer in Anatomy in William Hunter’s school.  He was by all accounts an outstanding teacher eventually becoming William Hunters successor as professor of anatomy at the Royal Academy. He published various learned works on anatomy including his magnum opus ‘The History of the Absorbent system’ in 1784. This was a good year for him, he married Rebeca Palmer the daughter of the vicar of Combe Raleigh in Devon and also took part in the second manned balloon flight in England when he accompanied the French aeronaut Jean Pierre Blanchard from Chelsea to Sunbury The flight, which unsurprisingly was the object of great public interest, did not go smoothly. According to the Gentleman’s Magazine, “the fields for a considerable distance round little Chelsea were crowded with horse and foot, in consequence of which a general devastation took place in the gardens, the produce being either trampled down or torn up. The turnips grown there were totally despoiled. At 12 o’clock M Blanchard and Dr Sheldon stepped into the boat pending from the balloon, and the cords being loosed, it took a diagonal direction across the garden, its altitude being about two feet off the ground, and then rose above the wall, but not high enough for the boat to clear it.” Blanchard tried to persuade Sheldon to leave the balloon in order to lighten the load but Sheldon, who was paying for the trip, refused. A piqued Blanchard reacted by throwing Sheldon’s scientific instruments overboard and the balloon finally took off. The two men had a violent quarrel as they floated over South west London and into Surrey and when the balloon came down at Sunbury Sheldon departed leaving Blanchard to fly on alone to Romsey, 73 miles from their starting point in Chelsea.

As well as ballooning Sheldon was also interested in the anatomy of whales. After devising a poisoned harpoon to help him secure specimens he set out on a voyage to Greenland in 1788. At sea he had some sort of breakdown, an attack of ‘brain fever’ as his contemporaries put it and was transferred to another vessel making the return voyage to England. From that point on he suffered a recurring madness, probably a bi-polar disorder, that made it impossible for him to work regularly for the next ten years. Following a petition from his brother the Queen gave him permission to continue to give an annual lecture at the Royal Academy and he published a couple of essays, one on the patella and the other on the iris, but otherwise he was out of work for a decade. He moved to Combe Raleigh where his wife’s father was vicar and lived quietly until 1797 when he had recovered sufficiently to be appointed surgeon to the Royal Devon and Exeter hospital. He died in October 1808 and was buried in his father-in-law’s churchyard. A couple of months later his long suffering wife Rebecca presented his prize anatomical specimen to the Hunterian, the naked, embalmed body of a 24 year old woman which Sheldon apparently had kept on prominent display in his bedchamber for over thirty years. 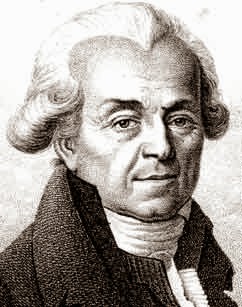 The French Geologist and traveller Barthélemy Faujas de Saint-Fond (left), shared Sheldon’s passion for ballooning  and had met him on a trip to England and Scotland in 1772. In 1797 he published his ‘Voyage en Angleterre, en Écosse et aux Îles Hébrides’ which contained a detailed account of their meeting at Sheldon’s London home. He had, Saint-Fond noted, “one of the finest anatomical cabinets in existence.” His host had ‘none of that English gravity,’ about him the Frenchman noted approvingly, instead he had an “extraordinary passion for study…..unceasingly animated by the vivacity or fervour of his character.” The two men discussed ballooning – at this point Sheldon had yet to make his ascent with Blanchard and had limited his experiments in aeronautics to building a balloon of varnished linen, 56 feet in diameter, in Lord Foley’s garden. As for Sheldon’s cabinet of curiosities, this was so interesting that Saint-Fond dedicated several mornings to studying its contents. The object that fascinated him the most though was ‘a kind of mummy which was very remarkable……It occupied a distinguished place in the chamber where the anatomist usually slept; and he was particularly fond of this work.” He goes on to describe how he was introduced into a “very handsome bed-room” where an oblong mahogany table occupied the middle of the floor facing the bed. The top of the table slid open to reveal a glass topped display case containing “the body of a young woman of nineteen or twenty, entirely naked. She had fine brown hair, and lay extended as on a bed.” Sheldon opened the display case and encouraged Saint-Fond to handle the embalmed corpse. He admired “the flexibility of the arms” and “a kind of elasticity in the bosom” and the perfect preservation of the “other parts” of the body.  Saint-Fond did notice, and commented to his host, that the fleshy parts appeared rather dry and the muscles too tense. Sheldon tetchily explained that this was the result of the long sickness which had killed the young woman rather than his embalming technique which he went to explain in great detail to the fascinated Frenchman.  As Sheldon was closing up his display case Saint-Fond asked who this young woman was to which Sheldon replied “frankly and without any hesitation ‘It is a mistress whom I tenderly loved. I paid every attention to her during a long sickness and a short time before her death she requested that I should make a mummy of her body and keep her beside me. I have kept my word to her.” Worldly as he was, Saint-Fond was shocked “I could not escape a disagreeable feeling at seeing a lover coolly describe the anatomical operations which he had made on the object of his most tender affection, on a most charming young woman whom he had lost.”  Who could, with his own hands, “perform the disgusting operations which must be necessary to preserve the body of his friend?” he asks. “I avow I should almost be tempted to act like the Egyptians, who stoned those who executed this melancholy business.” Later though he discovered that many “well informed persons in London” were aware of Sheldon’s story and assured him that it required great strength of mind for Sheldon to overcome his sensitivity and carry out the work necessary to preserve Ms Johnson. “I certainly deceived myself and was wrong in regarding this kind of courage on his part as an act of cynicism,” Saint Fond observes sadly before moving onto a livelier subject, a dinner given in his honour at the Royal Academy.

So who was Miss Johnson? Do we know anything about her? William Sweeting, a nephew of John Sheldon’s, told various people, including William Clift curator of the Hunterian that his uncle’s lover had been Sarah Stone a medical artist. At first glance it seems an unimpeachable source, a close relative but Sweeting admitted that his aunt knew nothing of Miss Johnson’s true identity and so he must have had Sarah Stone’s name directly from Sheldon. There cannot have been many female professional artists working in the 1770’s and so I assumed it would be easy to track down Sarah Stone, and indeed it was not hard to find her. Born 1760 Sarah Stone was a painter and illustrator of natural history subjects most renowned for her paintings of the artefacts and specimens gathered during Captain Cook’s south sea voyages commissioned by Sir Joseph Banks. The only problem with the theory is that Sarah Stone was alive and professionally active until the 1840’s (long after Sheldon himself died) which makes it impossible for her to be the “most charming young woman” kept embalmed and naked in Sheldon’s bedroom. Was there another Sarah Stone working as an artist at the time? It seems unlikely and I certainly can’t trace one. 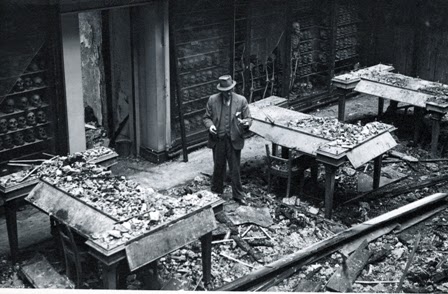