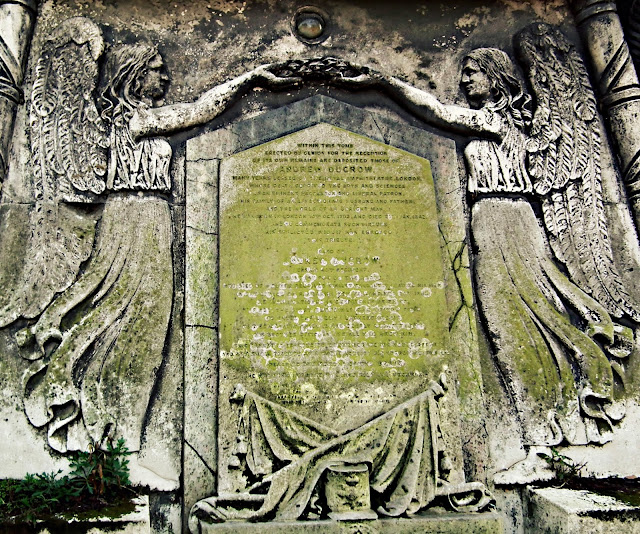 Commemorated on the Ducrow Mausoleum, on the same panel as his father (and below the famous epitaph ‘Erected by a genius for the reception of his own remains’, generally read as a piece of self aggrandisement by the deceased showman himself but almost certainly the words of his wife Louisa) is his youngest son. The full inscription reads: 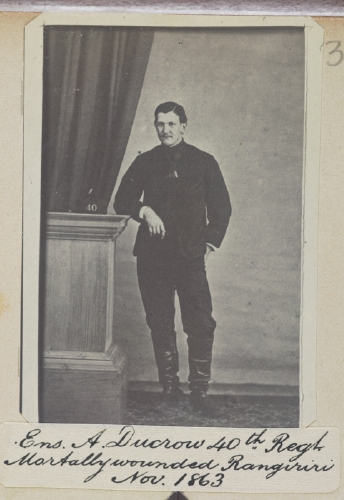 Louisa Ducrow gave birth to her youngest son on 18 June 1842, four months after the death of her husband and named the baby after his recently deceased father, Andrew Ducrow. She baptised him in November at St Johns in Waterloo. The baptismal register gives no indication that Andrew Ducrow père was dead; in the Quality, Trade or Profession column he is listed as an equestrian (an unsuitably vigorous trade for a corpse). Andrew Ducrow fils did not however remain sans père for very long. With her husband buried for little more than two years Louisa Ducrow married John Hay, on 24 February 1844, and Andrew fils and his three siblings acquired a stepfather. Some sources say John Hay was a brewer, but it is far from certain that he had any money. When he moved his new family from Lambeth to the more upmarket Albany Street, an extension of Great Portland Street, on the Regents Park estate, he may well have been spending what was left of Andrew Ducrow’s £60,000 fortune (in the 1851 census his occupation was simply listed as Gentleman, a career involving little or no remuneration. A decade later in the 1861 census he had become an hotelier).  Certainly by 1847 John Hay was in dispute with the executors of Ducrow’s will; he was no longer willing to spend at least some of the money set aside in the will for the upkeep of the Mausoleum. Ducrow had left £500 to meet his funeral costs, £800  “to be expended in or about the erecting or enlarging, or adding to or altering the monument then erected over his vault and for the purpose of placing inscriptions on the said monument,” and a further £200 to be placed in trust in the 3% bank annuities, the dividends to be used in “repairing, renewing, and decorating his said vault, monument, and obelisks or columns, and the inscription thereon, and planting and keeping up, and spreading such shrubs and flowers about or upon the same.” The £500 for the funeral had presumably long been paid out but perhaps there was still something left of the £800 and certainly the whole of the £200 to be invested in the 3 per cents. Louisa, or more likely John, were reluctant to tie up good money for the purposes of providing flowers for Ducrow’s tomb and one of the other executors, Oscar Byrne, felt obliged to take the matter to law. In June 1847 the case was brought before the Court of Chancery and brought to a swift conclusion when the defendant’s counsel raised no objection to any of the provisions of the will, effectively conceding the case.


We know nothing about Andrew Ducrow fils life growing up in the household of John Hay at Albany Street. The marriage between his mother and the gentleman hotelier was childless but all four of the Ducrow offspring were still living at Albany Street according to the 1861 census.  We know that Andrew fils was already in the army by the beginning of 1861 as according to the London Gazette he was appointed ensign by purchase, taking the place of former ensign Henry Swanson, in the regiment of the 40th Foot on the 15th January. Shortly afterwards he travelled with his regiment to New Zealand where he saw active service in the land wars, taking part in the invasion of Waikato and losing his life at the key engagement of the campaign in Rangiriri, being shot in the left knee on 20 November and dying two days before Christmas after having his leg amputated.


DEATH OF ENSIGN DUCROW - It is with great regret that we announce to our readers the death of Ensign Ducrow at the Queen's Redoubt, at a quarter to eleven o'clock yesterday morning. As our readers already know he was one of the brave fellows who were wounded at Rangiriri, and whose wound was so severe that his leg had to be amputated. It was at first thought that he would recover, but at last he sank under it, and is now no more. His remains will be brought into town to-day, and we presume they will be buried on Saturday. Ensign Andrew Ducrow entered the service in the 40th Regt. on the 18th January, 1861, and shortly after embarked from England for this colony. In May last he went to Taranaki, and returned with the rest of the troops. This as might be expected from his youth and rank, was the first active service he had seen, and unfortunately it is the last. He was generally respected by his brother soldiers. His death increases the number of officers lost to the British service, and their sorrowing relatives, by the attack on Rangiriri, to no less than six.


FUNERAL OF ENSIGN DUCROW - The remains of this unfortunate young officer, who was severely wounded at Rangiriri, and whose death we reported a few days ago, were interred yesterday in the Auckland cemetery. Although the rank of Ensign Ducrow did not entitle him to the same honours at his funeral as would be paid to those in a position above him, and whose services had made them more conspicuous for the part they had taken in the war, yet we are quite sure the attendance upon his obsequies was none the less sincere. It must, indeed, be a matter of regret that this gallant young gentlemen should have fallen at so early an age, as he was a promising officer; and might have achieved distinction for himself and done the state good service. Like Lieutenant Colonel, Austen, Ensign Ducrow had, through his relatives, just come into a very handsome income for his rank. From the enjoyment of this, however, he has been debarred; but he leaves behind him the name of being one of those who bravely fought for their country at Rangiriri and suffered.


It was arranged that the funeral procession should leave the Albert Barracks at half past 3 o'clock, and at that hour two or three hundred persons assembled there. This weather, although threatening, kept fine, and all the preliminaries; having been arranged, the procession started from the Albert Barracks about four o'clock, the band, of the 50th Regiment preceding it, and playing the Dead March. The following was the order of the procession:—


The road to the burial ground was pretty thickly covered with spectators. On reaching the cemetery the usual funeral service was read by the Rev. Kinder, garrison chaplain, and three volleys having being fired over the grave the assemblage dispersed. The remains of Ensign Duerow were laid beside the rest of the dead heroes of Rangiriri, whose last resting place is now mournfully denoted by a row of fresh mounds of earth, unornamented as yet by those tokens with which the living seek to perpetuate the memory of the dead.  The following was the inscription on the coffin:— ENSIGN ANDREW DTJCROW, 40th REGIMENT, DIED OF WOUNDS RECEIVED IN ACTION. 20th November, 1863, AGED 21 YEARS.


Most of his money went back to his mother and John Hay but he bequeathed his gold signet ring to his friend Lieutenant Burton who was still wearing it 33 years later as a prized souvenir of his departed friend.